xxxxxThe churchman Jan Huss was the leader of the Bohemian reform movement. His beliefs, closely akin to those of the English theologian John Wycliffe, were contained in his De Ecclesia (The Church), written in 1413. In 1409 he was forbidden to preach and, four years later, was forced to leave Prague. The following year, having been given a promise of safe conduct, he attended the Council of Constance, but was then arrested, tried and burned at the stake in 1415. This led to a violent revolt on his behalf, aimed at Sigismund, the man responsible for this betrayal. The Hussites won a number of victories against the Catholics, but a split occurred in their ranks, and this weakened their cause. The Catholics eventually triumphed at the Battle of Lipany in 1434, and Sigismund became king of Bohemia. 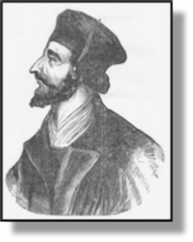 xxxxxJan Huss was born of a humble family at Husinec in southern Bohemia, and he took his name from his birthplace. He studied theology at the University of Prague, was ordained in 1401, and preached at Bethlehem Chapel in Prague before becoming rector of his university. Influenced by the writing of the English priest John Wycliffe, he became the leader of the Bohemian reform movement, attacking the wealth and abuses of the Church. Like Wycliffe, he rejected the pope’s claim to absolute authority, arguing that the Bible was the ultimate religious authority, and calling for a return to the simplicity of the apostolic life. Such beliefs were contained in his major work De Ecclesia (The Church), written later in 1413.

xxxxxNot surprisingly, his continued attacks on the Church began to lose him support, particularly among the higher clergy. In 1409, as we have seen, the new pope at Pisa, Alexander V, sent a papal bull to the Archbishop of Prague ordering the burning of all of Wycliffe’s writings and, as a consequence, Huss was forbidden to preach. Then two years later he was excommunicated and 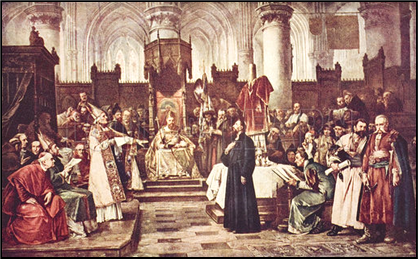 banned from his university. Such actions led to popular demonstrations on his behalf, but, eventually, in 1413, he was forced to leave Prague. When summoned to appear before the Council of Constance (illustrated) the following year, he agreed to attend and to defend his case on being given a promise of safe conduct (both ways!) by the German king, Sigismund. At this council, however, called to find a solution to the Great Schism and to reform the Church, he was arrested, denounced as a heretic, and condemned to death. He was burnt at the stake in July 1415.

xxxxxThe sordid treatment Huss had received, plus his condemnation and death, led to a violent revolt by his followers, the Hussites. And this revolt erupted into a series of wars in 1419 when, with the death of King Wenceslas, Sigismund - the man held responsible for the death of Huss - claimed the Bohemian throne. The Hussites won resounding victories over the Catholic crusades sent against them, but a split then occurred amongst their ranks - the moderates (the Calixtines) and the radicals (the Taborites) - and the moderates pulled out of the fight. The Catholic Church finally triumphed at the battle of Lipany in 1434 and two years later Sigismund entered Prague as king of Bohemia. 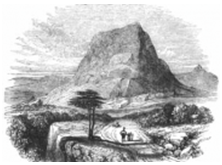 xxxxxIncidentally, in this rebellion by the Hussites following the death of their leader, the moderates were called Calixtines because their main aim was to obtain a change to the format of the Eucharist (calix is Latin for chalice), whilst the radicals were called Taborites because they held their meetings at a fortified height south of Prague to which they gave the biblical name of Mount Tabor (the traditional site of the Transfiguration of Christ when, according to three of the Gospels, His face and clothing became enveloped in a white and shining light).

Huss: woodcut c1865, artist unknown, from a late edition of The Book of Martrys by John Fox, first published in 1563 – private collection. Council of Constance: colour lithograph after the Czech painter Vaclav Brozik (1851-1901) – illustration from The Outline of History by H.G. Wells, vol.2, 1920. Mount Tabor: engraving contained in The Illustrated London Reading Book, printed and published by The Illustrated London News in 1851, artist unknown – eBook, The Project Gutenberg.