xxxxxIn his major work, Leviathan, published in 1651, the English political theorist Thomas Hobbes set out his philosophy. Man’s nature was “nasty, brutish and short” so there was need for absolute government, either by a sovereign whose only duty was towards God, or by some form of assembly. He served as a tutor to Charles Stuart in Paris, but later made his peace with the Protectorate and returned to England. A later work, Concerning the Body, led to a bitter dispute with the mathematician John Wallis and the scientist Robert Boyle, both of whom were in favour of experimental research as opposed to the deductive method. Wallis accused him of deserting the Royalist cause, and Hobbes derided Wallis’ work in mathematics. Although a man of enormous intellect, his concept of the state did not go unchallenged. As we shall see (1690 CW), the English philosopher John Locke was among those who took him to task. During his travels on the continent Hobbes met Galileo and René Descartes. 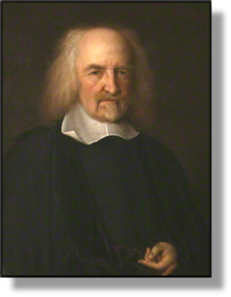 xxxxxThe English philosopher, political theorist and mathematician Thomas Hobbes was a firm believer in absolute government. In his major work Leviathan, published in 1651 - at the very start of Cromwell's Commonwealth - he claimed that this was the only means by which good order and security could be maintained. It was in man's nature to be "nasty, brutish and short", and this could only be kept in check by an absolute authority, preferably a sovereign whose only duty was towards God.

xxxxxHobbes, the son of an Anglican clergyman, was born in Westport, Wiltshire, and, after studying at Oxford University, made several tours on the continent, visiting France and Italy with his pupil, William Cavendish, later earl of Devonshire. During his travels he met many eminent thinkers of the day, including the Italian scientist Galileo and the French philosopher René Descartes. After returning to England, he became deeply interested in the struggle between Parliament and Crown, then reaching its climax, and in 1640 produced a treatise in defence of the royal prerogative entitled Elements of Law, Natural and Politic. This was only circulated privately in manuscript form, but fearing that Parliament might get to hear of it and have him arrested, he fled to Paris and remained in exile for the next eleven years. 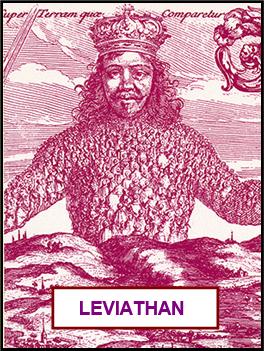 xxxxxIn 1642 he completed his Concerning Citizenship, a work setting out his theory of government, and then for two years, 1646-48, he served as mathematics tutor to the Prince of Wales, also in exile in Paris. His major work, Leviathan, was produced in 1651. Although this was clearly in favour of an absolute monarchy, it did accept the possibility of an assembly as the supreme authority, and this was seen by many exiled royalists as a justification of the Commonwealth. Barred from court as a consequence, he returned to England and made his peace with the Protectorate. In 1660 when his former pupil Charles Stewart, acceded to the English throne, Hobbes felt secure at last, but six years later the House of Commons ordered an examination of Leviathan on the grounds that it was atheistic. As a result, Hobbes burnt many of his papers and postponed the publication of a number of his works.

xxxxxAnother of his major philosophical works, Concerning the Body (1655), in which he analysed human nature in terms of matter and motion, brought him into direct conflict with - amongst others - the English mathematician, John Wallis (illustrated), and the Irish scientist Robert Boyle. Then in the process of forming the Royal Society, they were in favour of experimental research as opposed to the deductive method advocated by Hobbes. The disagreement with Wallis (1656) became very bitter. Hobbes dismissed Wallis' masterpiece, The Arithmetic of Infinities, a 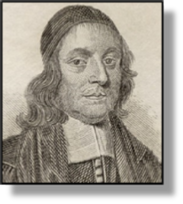 s a "scab of symbols", whilst Wallis accused him of writing the Leviathan with Oliver Cromwell in mind, and of deserting his royal master (Charles Stewart) in his time of need. To put the record straight, in 1662 Hobbes published a letter headed: Mr. Hobbes Considered in His Loyalty, Religion, Reputation, and Manners. But the quarrel did not end there. Later Hobbes wrote a treatise on the workings of geometry, pointing out where the professors in this subject (including Wallis) had made mistakes, and this renewed the dispute between them.

xxxxxDuring his long life Hobbes produced a number of scholarly works. He translated into Latin some of the essays by Francis Bacon, published an English version of the works of Thucydides and, during his latter years, translated both the Odyssey and the Iliad. He was 84 when he compiled his autobiography in Latin verse!

xxxxxIn formulating his political theories, Hobbes applied the principles of mechanics to human nature, and concluded that self-preservation was the driving force. Humans feared each other and human life was thus "a war of all against all". There had to be, therefore, a social contract wherein the individual accepted a superior power in order that human beings might be protected from their own brutish and selfish instincts. In providing this total power, he considered that an absolute monarchy was the most effective means (but not necessarily the only one) of preserving peace and stability in religious as well as secular matters. Liberty of conscience, implicit, for example, in the Reformation, only brought division and anarchy.

xxxxxHobbes was a man of enormous intellect and, as a political theorist, was one of the most provocative thinkers of his age. Understandably, his ideas did not go unchallenged, especially in the field of political theory. As we shall see, for example, the English philosopher John Locke was to attack the theory of divine right and Hobbes' whole concept of the state in his Two Treatises of Government, published in 1690 (W3).

xxxxxIncidentally, Leviathan as mentioned in the Old Testament is a sea monster or whale. Hobbes uses the term here to refer to an awesome quantity of power invested in one person to ensure that the state is kept under control.