xxxxxAs we have seen, it was in 1864 (Vb) that the Scottish physicist and mathematician James Clerk Maxwell put forward his theory of electromagnetic waves, based purely on a set of mathematical equations. It was to be more than twenty years before the German physicist Heinrich Hertz became the first person to prove, by experiment, the validity of Maxwell’s findings. Appointed lecturer of physics at the Polytechnic School at Karlsruhe in 1885, he designed his own apparatus and, after a series of experiments, proved conclusively in 1887 that electromagnetic waves existed, and that it was possible to make electrical and magnetic fields detach themselves from wires and travel through air, as Maxwell had predicted. Later he went on to prove that the velocity of radio waves and their other properties were the same as those for light waves. Hertz published his findings in a number of research papers, and in his major work Investigations into the Propagation of Electrical Energy, and these brought him international fame, but he failed to realise the enormous potential of his discoveries. His findings had sparked off - literally - the age of electricity, but it was left to others, notably the Italian electrical engineer Guglielmo Marconi in 1895, to put his findings into practice and to develop, over the years, wireless telegraphy, radio, television and radar. Before his early death at the age of 36, due to an incurable bone infection, Hertz also completed a second work of note, The Principle of Mechanics in a New Form. 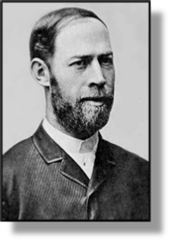 xxxxxIt was the German physicist Heinrich Rudolf Hertz who was the first to produce and transmit electromagnetic waves. He himself saw little or no value in his discovery of these “mysterious electrical waves” but, developed further by the likes of the Italian electrical engineer Guglielmo Marconi and the Croatian-born American physicist Nikola Tesla, they paved the way for the development of wireless telegraphy, radio and, in the long term, both television and radar.

xxxxxHertz was born in Hamburg of a prosperous and talented family. He attended a private school for ten years before continuing his studies at the city’s Johanneum Gymnasium. During these early years he excelled in a wide variety of subjects, including languages, the natural sciences and practical skills. In 1875 he began a course in civic engineering at Frankfurt University, but, after his studies were interrupted by a year’s compulsory military service, spent in Berlin, he decided that his future lay in scientific research. Fortunately for him, his father accepted this change in direction and gave him his support.

xxxxxAs a start to his new career, Hertz spent a year at the University of Munich as a research student, and then in 1878 continued his studies at Berlin. It was there that he became a pupil of the eminent German physicist and physician Herman von Helmholtz, a man who played an important role in furthering his career. He obtained his doctorate in 1880 at the age of 22, and then spent the next three years as Helmholtz’s assistant. During these years he wrote fifteen papers on a variety of subjects, the majority related to electricity. In 1883 he began his teaching career. In that year he was appointed lecturer in theoretical physics at the University of Kiel - where his work included research into meteorology and electrical and magnetic units - and two years later he become professor of physics at the Polytechnic School at Karlsruhe. 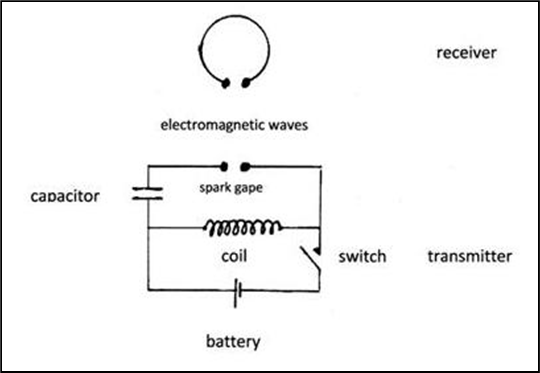 xxxxxIt was at Karlsruhe, over a period of five years (1885 to 1889), that Hertz set out to prove and expand the electromagnetic theory that had been put forward by James Clerk Maxwell over twenty years earlier. As we have seen, the Scottish physicist and mathematician had come up with his theory based on a series of mathematical equations (the “Maxwell equations”) in 1864 (Vb), but the existence of electromagnetic waves had never been proven. Hertz, working in a corner of his physics classroom, began his experiments in 1886. His apparatus was made up of two parts: a high voltage induction coil, a condenser and a spark plug to produce and transmit the waves, and a small loop of wire with a spark gap to receive and detect them (see diagram above and illustration below). During a series of experiments in 1887 he used spark discharges to prove conclusively that electricity could be transmitted, thereby becoming the first person to demonstrate the existence of electromagnetic waves, the first to broadcast and receive radio waves, and the first to demonstrate that electrical and magnetic fields could be made to detach themselves from wires (becoming wireless) and travel through air, as Maxwell had predicted.

xxxxxIn more advanced experiments Hertz proved that the velocity of radio waves and their susceptibility to reflection, refraction and interference were the same as those of light waves, but that they had a much longer wavelength. These and his earlier findings were published in nine research papers, the Annals of Physics and Chemistry, and his major book on the subject, Investigations int 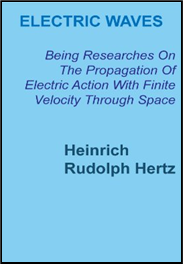 o the Propagation of Electrical Energy, produced in 1892. These publications brought him fame throughout the scientific world, but he himself failed to realise the enormous practical potential of his discoveries. He sparked off - literally - the age of electricity, with his research paving the way for the development of wireless telegraphy, radio and, in the long term both television and radar. However, as we shall see, it was left to others, notably the Italian electrical engineer Guglielmo Marconi in 1895 and the Croatian-born American physicist Nikola Tesla, to put his findings to practical, far-reaching use. Tesla went so far as to set up a broadcasting station on Long Island, New York, in 1900, planning to develop a “World Wireless” but the project ran out of funds.

xxxxxIn 1889, following the death of the German physicist Rudolf Clausius, Hertz succeeded him as professor of physics at the University of Bonn. There he published two further papers on Maxwell’s theories, together with research into the discharge of electricity in rarefied gasses, but he devoted most of his time to a theoretical study of Mechanics, a branch of science in which he had shown interest earlier in his career. His major work on this subject, The Principle of Mechanics in a New Form, was published by his assistant Philip Lenard in 1895, a year after his untimely death.

xxxxxHertz had begun to suffer from a serious bone infection of the face during his time at Karlsruhe, and the complaint became progressively worse after his move to Bonn. No cure could be found, and he died of blood poisoning on the first day of 1894. His death at the age of 36 cut short a brilliant career. He was buried in the Jewish cemetery at Ohlsdorf, Hamburg. 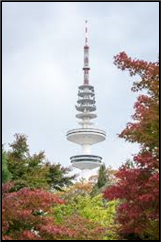 xxxxxIncidentally, in 1930 the electrical unit of frequency - one cycle per second - was named a hertz (Hz) in recognition of his contribution to science, and in 1968 the elegant new TV tower in Hamburg, his place of birth, was named the Heinrich Hertz Tower in his honour. ……

xxxxx…… When the Nazi party came to power in Germany in the 1930s, a portrait of Hertz was removed from Hamburg City Hall because of his partly Jewish ancestry, and an unsuccessful attempt was also made to dispense with the electrical term of hertz. The portrait was replaced in 1949. ……

xxxxx…… Hertz was a modest, likeable man. He married Elizabeth Doll, the daughter of one of his colleagues, in 1886, and they had two daughters, Joanna and Mathilde. ……

xxxxx…… His nephew, Gustav Ludwig Hertz (1887-1975) received the Noble Prize for Physics in 1925, along with the German physicist James Franck, for their discovery of the laws governing the impact of an electron upon an atom. ……

xxxxx…… ThexIrish physicist George Francis Fitzgerald (1851-1901) predicted as early as 1883 that alternating electric current would result in the radiation of electromagnetic waves, but he admitted that he could not see “any feasible way of detecting the induced resonance”. 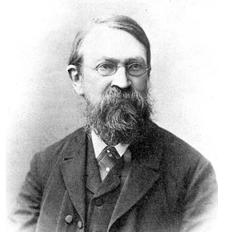 xxxxxIt was in 1887 that the eminent Austrian physicist and philosopher Ernst Mach (1838-1916) published his work on the photography of projectiles in flight and came up with what later became known as the “Mach Number” - the ratio of the velocity of an object to the velocity of sound. And his insistence 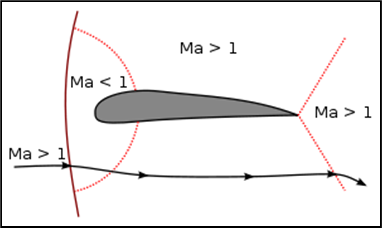 that it was no longer possible to believe in absolute space and absolute time - in opposition to Isaac Newton’s assumption - paved the way for the relativity theories of the famous German physicist Albert Einstein.

xxxxxMach was educated at Vienna University, and from 1864 was professor successively at the Universities of Graz, Prague and Vienna. On his retirement from academic life in 1901, he was appointed to the upper chamber of the Australian parliament. As a philosopher, he assisted in the development of phenomenalism ( a more radical form of empiricism,) expanding on the theory that knowledge came only through sensory experience, and that sensory phenomenon was the only “pure data”.