xxxxxThe Flemish-born painter Frans Hals gained a reputation for the spontaneity and vivacity of his early portraits. This relaxed style is seen at its best in his famous The Laughing Cavalier of 1624, and in works like The Merry Drinker and The Gypsy Girl. Later in his career his approach became more sombre. His tone became more muted, and his colours darker. To this period belongs two of his outstanding group portraits, the men and women administrators of the almshouses of Haarlem. These dignified studies are a far cry from his earlier, carefree work. Together with Rembrandt and Jan Vermeer he belongs to the golden age of Dutch art, and his style - impressionist to some degree - clearly influenced Edouard Manet by its free brushwork, and Vincent van Gogh by its wide range of colours. 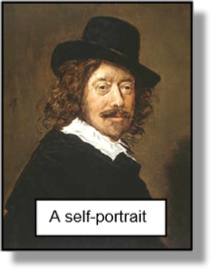 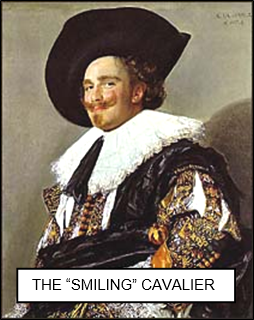 xxxxxThe Flemish-born painter Frans Hals was renowned for the spontaneity and vivacity of his portraits, achieved for the most part by his free, rapid brushwork, his dazzling lighting effects, and his tendency to paint directly onto the canvas. This fluent, original style first became apparent in one of his earliest works, The Banquet of the Officers of the St. George Militia Company of 1616, where the life-like but informal portrayal is a far cry from the posed, stiff figures of conventional portraiture. And this relaxed style is doubtless best seen in his most famous work The Laughing Cavalier, produced in 1624 and now in the Wallace Collection in London.

xxxxxIn all, some 250 of his paintings - portraits and genre scenes - have survived. Among his earlier works, famed for their warmth, jollity and vitality, and all painted in the 1620s and 1630s, are the 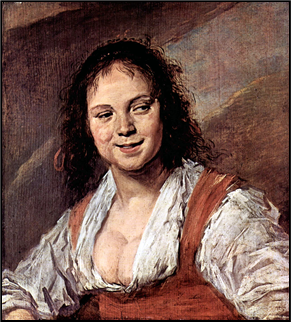 captivating Laughing Boy, the self-evident Merry Drinker, The Prodigal Son in a Tavern (a common theme of the day), and the Shrovetide Revellers, a happy scene in which symbols - such as a spoon indicating greed - play an important part. Delightful, too, is his Nurse and Child, Boy with a Flute, and the charming and vivacious Gipsy Girl (illustrated here).

xxxxxLater in his career, this light, carefree style, so adept at depicting merrymaking, gave way to a more thoughtful and sombre approach. Rather than aiming to catch a characteristic but fleeting expression, he attempted to analyse the character of his subject. Colours become muted, tones turned darker, and a subtle range of black and white often predominated. It was perhaps because of this that, from about 1650 onwards, he received fewer commissions. Nonetheless, to this later period belongs two of his most impressive works, the group portraits of the men and women administrators of the almshouses of Haarlem, both brilliant in their realistic depiction of old-age. (The women - the Regentesses - are illustrated here below.) Considered among his masterpieces, these works, in contrast to his early paintings, are serious, dignified studies and are not without, you might think, an eerie sense of foreboding. 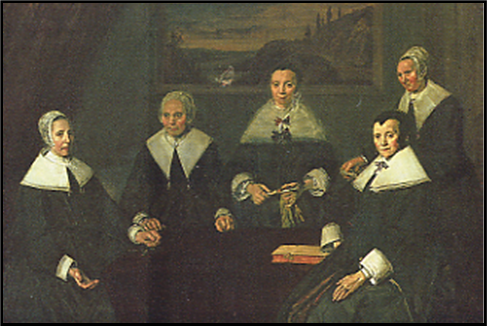 xxxxxVery little is known of the early career of the man who was to become one of Holland's greatest portrait painters. It is more than likely that he was born in Antwerp, Belgium, but he spent nearly all his life at Haarlem in the Netherlands, where he was trained in the studio of the painter Karel van Mander. Despite being in almost constant demand for group portraits of the members of charity organizations, various militia companies, the city corporation and the like, it appears that he was often in debt and ended his days in an almshouse - now, fittingly, the Frans Hals Museum and containing some of his finest group portraits. His financial problems may well have been due to his being something of a bon viveur, but the suggestion that he led a dissolute life is probably an exaggeration, despite a court reprimand in 1616 for maltreating his first wife.

xxxxxThe four portraits illustrated below are (left to right): Buffoon Playing a Lute, Willem Croes, The Merry Drinker, and The Fisher Boy.

xxxxxHals had ten children, and five of his eight sons followed in their father's footsteps - though none with such marked success! Two of his pupils in particular, the Dutch painters Adriaen Brouwer and Adriaen van Ostade , were inspired by the techniques of their master, and Hals' style - often teetering on the borders of impressionism - clearly influenced the French artist Edouard Manet by its free brushwork, and the Dutch painter Vincent van Gogh by its wide range of colours. Together with Rembrandt and Jan Vermeer, he belongs to the golden age of Dutch art, and ranks high among Europe's masters in the art of portraiture.