xxxxxIn his Synopsis on Cometary Astronomy, published in 1705, the English astronomer Edmund Halley argued that comets moved in elliptical orbit around the sun and, from this, he calculated that a series of comet sightings over many years were, in fact, the same comet. He predicted that this comet would reappear in 1758, and so it did, sixteen years after his death. Among his many other achievements was an extensive star catalogue, a means of calculating the distance of the Earth from the Sun, a world map showing the prevailing winds, and a magnetic chart as an aid to navigation. Earlier in his career he spent two years on the island of St. Helena charting stars, and he recorded his findings in his Catalogus Stellarum Australium of 1678. And Halley also did science a major service. It was due to his encouragement and money that Isaac Newton eventually published his major work the Principia in 1687. Apart from Newton, he numbered among his friends the microscopist Robert Hooke, the architect Christopher Wren, and the Polish astronomer Johannes Hevelius, whom he visited at Danzig. 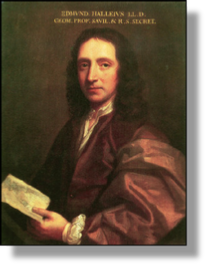 xxxxxThe English astronomer Edmund Halley is best known for the comet which he identified in 1705 and which later came to be named after him. In his major work Synopsis on Cometary Astronomy, published in 1705, he argued that comets moved in elliptical orbits around the sun, and were thus part of the solar system. From this hypothesis he calculated the orbits of 24 comets, and reasoned that a certain string of comet sightings reported in 1456, 1531, 1607 and 1682 were, in fact, the re-appearances of the same comet. He thus predicted that this comet would make another appearance in 1758. When it did so, sixteen years after his death, his fame was assured and, inevitably, the comet was named in his honour.

xxxxxHalley's claim to fame, however, rests upon a wide range of achievements and, in fact, was justified well within his own lifetime. During a distinguished career, he compiled an extensive star catalogue, and, with the aid of historical records, produced data which eventually enabled a fairly accurate calculation to be made of the astronomical unit. Other accomplishments included the means of calculating the distance of the Earth from the Sun by observations made during a transit of Venus across the sun's disc, and the detection of the "proper motions" (gradual changes in position) of three stars - Aldebaran, Arcturus and Sirius.

xxxxxHalley was born at Shoreditch, close to London, and attended St. Paul's School before going up to Oxford in 1673. It was here that he first made the acquaintance of the astronomer John Flamsteed. After visiting the Royal Observatory at Greenwich, where Flamsteed was working, he became deeply interested in the science of astronomy and decided to make that his career. He left the university in 1676, and with money from his father and the help of the East India Company, he spent two years on the South Atlantic island of St. Helena, charting some 340 stars of the southern hemisphere. Whilst there he also observed a transit of Mercury, and made a number of pendulum observations. On his return he published his findings in his Catalogus Stellarum Australium of 1678, and this established his reputation as an astronomer. In that year, through the good offices of the king, he was awarded an MA degree from Oxford, and elected a fellow of the Royal Society - where he became well acquainted with the microscopist Robert Hooke and the architect Christopher Wren. The following year he went to Danzig (modern Gadansk) to pay a visit to the Polish astronomer Johannes Hevelius, famed for his detailed map of the lunar surface. 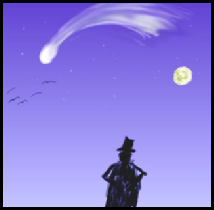 ut Halley's research went far beyond the study of the heavens. He was also interested in mathematics and archaeology, and he achieved some pioneer work in the fields of geophysics and meteorology. In 1686, for example, he produced a map showing the prevailing winds over the oceans of the world, the first meteorological chart ever to be published. But perhaps his greatest contribution to science had to do with someone else's research rather than with his own. It was Halley who, during a visit to the scientist Isaac Newton at Cambridge in 1684, came to realise the advances which had been made by his friend in the field of planetary motion, explained by his concept of universal gravitation. It was he who persuaded Newton to produce his tract On the Motion of Bodies in Orbit, and then encouraged him to revise and expand his ideas in his scientific masterpiece, the Principia. He then edited the text, corrected the proofs, and met the cost of publication in 1687. For this alone, Halley deserves a place in the history of scientific advance!

xxxxxIn 1698 he made another journey to the South Atlantic, this time in command of HMS Paramour Park, a small war sloop. During this voyage - the first ever to be undertaken for purely scientific purposes - he observed the magnetic variations over a given area, and also determined the latitude and longitude of his ports of call. His observations were published in 1701 in his General Chart of the Variation of the Compass. This magnetic chart, the first of its kind, traced points having the same variation of the compass. This information proved of practical value in navigation and, continuously revised, was used by seamen well into the second half of the century. 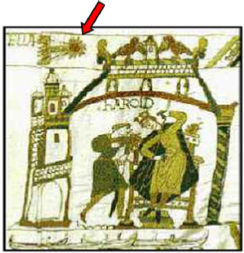 xxxxxHalley was appointed Savilian professor of geometry at Oxford in 1704, and succeeded John Flamsteed as Astronomer Royal at Greenwich in 1720. Here, by observing the transits of the moon across the meridian, he continued his attempts to find a means of determining longitude at sea.

xxxxxIncidentally, subsequent calculations have determined that it was Halley's comet that was seen in the sky during the Norman invasion of England in 1066. In fact, it was depicted as an ominous sign for Harold when the Bayeux Tapestry was made some years later.

xxxxxThe English astronomer John Flamsteed (1646-1719), largely self-taught, compiled a huge catalogue of some 3000 stars. He played a vital part in the founding of the Royal Greenwich Observatory in 1675, and a year later was England’s first Astronomer Royal. His later years were marred by a bitter dispute with the scientist Isaac Newton and Edmund Halley. Newton required some of Flamsteed’s research papers and, being unwilling to wait for their publication, seized them and published them with the help of Halley. Some 400 were printed, but Flamsteed managed to retrieve most of them and have them destroyed. 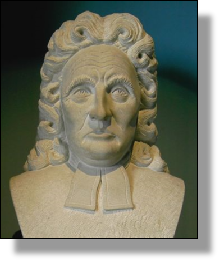 xxxxxAs noted earlier, Halley first met John Flamsteed (1646-1719) when he went up to Oxford in 1673, and it was clearly under his influence that, three years later, he left the university and took up the study of astronomy. But, as we shall see, any friendship there might have been between the two men at that time was to be totally shattered some years later amid a bitter and protracted dispute. 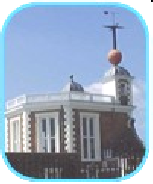 xxxxxFlamsteed left school in 1662, and, before attending Cambridge University, spent eight years studying astronomy on his own. He soon gained a reputation for his compiling of a huge catalogue of stars, a work which, when eventually completed, listed and numbered no less than 3,000. Most of these were positioned with a greater accuracy than attained hitherto, and some of his designations remain in use today. It was upon his advice that the Royal Greenwich Observatory was founded in 1675, and a year later he was appointed England's first Astronomer Royal. Membership of the Royal Society followed in 1677.

xxxxxBut success brought trouble in its wake. The latter part of his life was marred by a bitter, long drawn-out dispute with Isaac Newton and Edmund Halley, Newton's close friend and confidante. It centred around the huge amount of valuable data Flamsteed had amassed during his work at the Royal Observatory, mainly contained in his catalogue of stars. In the late 1690s these observations were urgently needed by Newton, primarily for his work on the lunar theory. Flamsteed was anxious to withhold his findings until his work was completed, but Newton and Halley then conspired to have parts of these observations published without his permission. 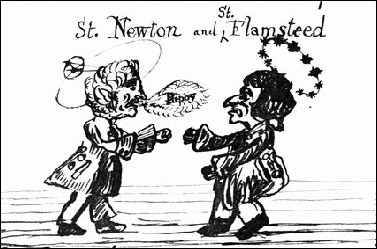 xxxxxNewton, then President of the Royal Society and a public figure of repute (he was knighted in 1705), now used his position to gain the advantage. He had himself named as chairman of a committee responsible for the Royal Observatory, and began a campaign to obtain the immediate publication of Flamsteed's catalogue of stars. Eventually, this data was unlawfully seized, despite protest, and prepared for publication by Halley. In 1712 some 400 copies were printed. However, by a court order, Flamsteed managed to stop further production and to have 300 copies returned, all of which he destroyed. (The cartoon, produced some years later, has Newton calling Flamsteed a puppy!)

xxxxxThis brought an end to this shameful affair, though we are told that, out of spite, Newton omitted any references to Flamsteed's earlier help with the Principia when he drew up revised editions of this work. In fact, it was not until 1725, six year's after Flamsteed's death, that the star catalogue - the centre of this distasteful row - was published under the title Historia Coelestis Britannica. It was followed four years later by his Atlas Coelestis.