xxxxxAs we have seen, by 1792 (G3b) Catherine the Great of Russia had established settlements along the northern shore of the Black Sea, gained control of the Crimea, and was laying claim to the northern part of the Caucasus (the vast area between the Black and Caspian Seas). Then in 1804 Tsar Alexander I, having seized power in Georgia, went to war with Persia (Iran) in an attempt to gain control over all of this region. He met with a large measure of success. By the Treaty of Gulistan in 1813 he gained the northern part of Azerbaijan and a string of eastern Khantes along the west coast of the Caspian Sea. By 1828 parts of Armenia had also been taken over, but there was much local resistance, and it was many years before this whole area was fully absorbed within the Russian Empire. 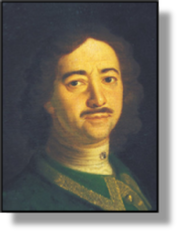 xxxxxAs we have seen, following the Treaty of Nerchinsk in 1689 (W3) Peter the Great of Russia (illustrated) conducted a series of battles with the Turks in the area of the Crimea, anxious to reach the Black Sea and gain access to the Mediterranean. After some initial reverses, in 1696 his army captured the fortress of Azov (4 miles east of the Sea of Azov which adjoins the Black Sea), but his success proved short-lived. In 1713, following another conflict with the Turks, 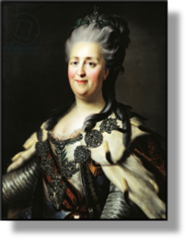 he was obliged to give up Azov by the terms of the Treaty of Adrianople. However, following his triumphant victory over the Swedes at the Battle of Poltava in 1709 and the Treaty of Nystadt which followed in 1721, he again turned his attention to Russia’s southern borders, this time casting an eye on the Caucasus, the vast area lying between the Black and Caspian Seas. Attacking Iran (Persia) in 1722, he occupied Derbent on the western shore of the Caspian Sea and in the following year seized Baku further south along the coast - though this important port was returned to the Iranians in 1735. 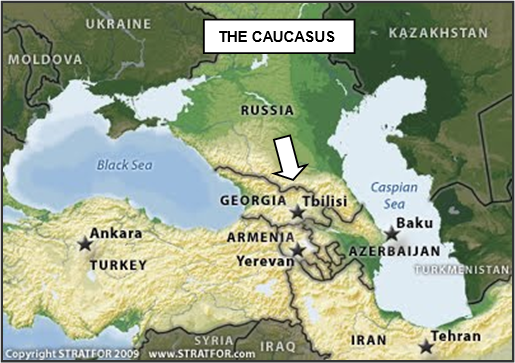 xxxxxRussia’s aim to gain control of both the Caspian and Black Seas was then taken up by Catherine the Great (illustrated) as part of her vast programme of expansion. During her reign she waged two wars against the Turks, and succeeded where Peter the Great had failed. By 1792 (G3b) she had established settlements along the north shore of the Black Sea and gained control of the Crimea. And in addition, in 1770 Russian troops crossed over the Caucasus mountain range for the first time and seized K’ut’aisi in west-central Georgia. By 1785 the whole of the northern region of the Caucasus was being claimed as a Russian province. 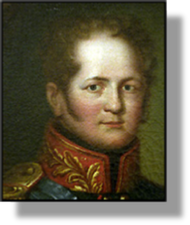 xxxxxThe reign of Tsar Alexander I (illustrated), beginning in 1801, saw further advance in this area (see map above). In that year the kingdom of Georgia was persuaded to accept Russian sovereignty - though some of its small principalities took some years to annex - and during the next two years two large groups of peoples in the centre of the region, the Ossetes and the Lezgians, acknowledged the Kremlin. Then in an attempt to complete the mastery of the Caucasus, Russia went to war with Persia (Iran) in 1804. After nine years of conflict the Treaty of Gulistan, held in 1813, ceded to Russia the northern part of Azerbaijan and a string of eastern Khantes along the west coast of the Caspian Sea, from Lankaran in the south to Derbent in the north - including the peninsula and port of Baku. Later,xareas of what is now Armenia were conquered from both the Persians and the Turks, and these gains were confirmed by the Treaty of Turkmenchay in 1828.

xxxxxSuccessful though the Russians were in this region, over the next thirty years or more they found it difficult to maintain control over some parts of their new provinces. The resistance of some of the mountain peoples, motivated by patriotism or religion, was particularly fierce and, because of the terrain, extremely difficult to counter. Indeed, the Lezgians of Dagestan were not fully pacified until the 1860s, and thousands of Circassians of Abkhazia in Western Caucasus chose to emigrate to Ottoman territory rather than live under Russian rule.

xxxxxNow absorbed into the Russian Empire, it was to be many years before these various peoples of the Caucasus region were to achieve full independence. Georgia and Azerbaijan, for example, were both incorporated into the Russian communist republic in the early 1920s, and did not gain their independence until 1991, following the collapse of the Soviet Union.

xxxxxIncidentally, Joseph Stalin, the Russian leader who held absolute authority over the Soviet Union from 1929 until his death in 1953, was born in the Georgian hill town of Gori. ……

xxxxx…… The name Baku is possibly a contraction of the Persian words bad kube meaning “blown upon by mountain winds”. As we have seen, this major port on the Caspian Sea was captured by Peter the Great in 1723, returned to Iran in 1735, and retaken by Russia in 1806. Today it is the capital of an independent Azerbaijan.