xxxxxThe gifted Dutch jurist Hugo Grotius laid the foundations of modern international law in his work The Free Sea (1609) - in which he argued that the open sea belonged to all nations - and in his On the Law of War and Peace, published in 1625 and containing his concept of the “just war”. Writing amid the chaos of the Thirty Years’ War, he stressed the need for conciliation in order to avoid such bloodshed and destruction in the future. His work had some influence on the Peace of Westphalia, the treaty which brought the war to an end in 1648. In 1619 he was imprisoned for life after becoming involved in an internal dispute between the Dutch Calvinists. However, he managed to escape and make his way to Paris, where he produced his highly successful theological treatise, On the Truth of the Christian Religion. 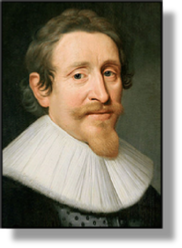 xxxxxThe Dutch jurist Hugo Grotius (the Latin equivalent of Huig de Groot), laid the foundations of modern international law. His first work, The Free Sea, published in 1609 and commissioned by the Dutch East India Company, argued that no country had the right to lay claim to any part of the open sea. Such a claim was not only against the fundamental laws of humanity, but also opposed to the laws of nature. Unlike land, the sea could not be "occupied" and should therefore 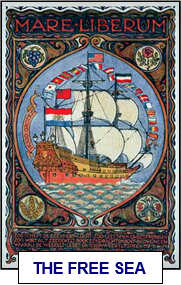 be open to all nations and subject to none.

xxxxxHe later applied such reasoned argument to human conflict. In his legal masterpiece, On the Law of War and Peace, published in 1625, he declared that war was only justified if it were fought for a righteous cause (his doctrine of the "just war"), but only after all attempts at conciliation had failed. Writing amid the carnage and destruction of the Thirty Years’ War, then raging across northern Europe, he called for the means by which such brutal warfare could be limited. This first comprehensive study of the conduct of international affairs was widely welcomed, and had some influence in the Peace of Westphalia, the settlement which brought an end to the European conflict in 1648. 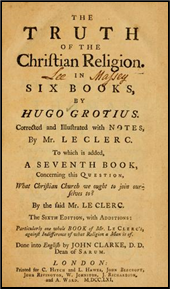 xxxxxBut not all his efforts were so well received. In 1619 his career was very nearly cut short. In attempting to conciliate in a bitter doctrinal dispute which had erupted between Dutch Calvinists, he became too deeply involved in the internal politics of the country and was sentenced to life imprisonment in the fortress of Loevestein. He was lucky enough to make his escape three years later by hiding in a chest of books, and he then fled to Paris, where he was received with honour by Louis XIII and members of his court. There he produced his most successful theological work, On the Truth of the Christian Religion. Published in 1627 it was widely translated and much acclaimed. During his career he also produced a number of papers on various legal and theological matters, and he wrote some fine poetry and historical studies.

xxxxxGrotius was born in Delft. He was an immensely gifted child, and went to study at the University of Leiden when he was only eleven years old. Then after serving on a mission to Henry IV of France - where the king described him as "the marvel of Holland" - he stayed on to study law at Orleans, receiving his doctorate at the age of 16. Returning to Holland in 1599, he practised law and quickly made a name for himself, being appointed deputy attorney general for the province of Holland eight years later, and then chief magistrate of Rotterdam. It was then that he became embroiled in politics and, after a spell of imprisonment, managed to escape to Paris. In 1634 he became Sweden's ambassador to the French court - a measure of the esteem in which he was held - and it was soon after giving up this post in 1645 that he was shipwrecked on the Pomeranian coast and died from his ordeal two days later. 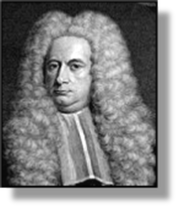 xxxxxIncidentally, the concept of the freedom of the High Seas was modified by the Dutch jurist Cornelius van Bynkershoek in 1703. In his On the Dominion of the Sea he argued that the waters adjoining a country should be deemed that nation's territorial waters up to and within the range of its shore-based artillery. This principle was subsequently adopted throughout the world and the limits of these waters have been a matter of debate - and sometimes dispute - ever since.