xxxxxGreek civilisation, like that of Rome, came to an end with the barbarian invasions during the 5th to the 7th century. However, the Greek language and much of Greek culture survived within the Byzantine Empire. As we have seen, this empire was occupied by Western princes when its capital, Constantinople, was sacked by the Crusaders in 1204, and then overthrown by the Ottoman Empire in 1453 (H6). For nearly 400 years much of Greece was under Turkish rule, and it was not until 1770 that the first attempt was made to break free. This failed, but in 1821 there were uprisings across the country. However, disputes between the various Greek factions, and the lack of organisation hindered the rebel’s cause, and it was not until 1827 that the war turned in their favour. In that year, Russia, Britain and France put pressure on the Sultan, and defeated a combined Turko-Egyptian fleet at the Battle of Navarino. The Egyptian leader Muhammad Ali, who had assisted the Turks, then agreed to withdraw his troops, and in 1829 the Russians forced the Sultan to come to terms at the Treaty of Adrianople. The Turkish government granted Greece its autonomy and this was confirmed by the three allies at the London Conference the following year. A period of much civil unrest followed, but the main aim had been achieved.

GREECE AND ITS WAR OF INDEPENDENCE 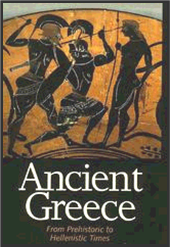 xxxxxThe classical age of Greece dates from about the 6th century BC, when a large number of city-states, made wealthy by trade, - particularly Athens, Corinth and Sparta - developed an advanced interest in politics, literature, art and architecture. Some of them even founded colonies along the shores of the Mediterranean and Black Sea. In the 5th century this remarkable, highly-organised pocket of civilisation managed to repel two invasions by the Persians, and there then followed the golden age of Athens. In the next century, however, the city states began feuding amongst themselves, and by 338 BC, during the reign of Philip II of Macedon, they had lost their independence to his central authority. Thus whilst Philip’s son, Alexander the Great, spread Greek culture as far as India and Egypt, Greece itself began to lose its dominant position. From 206 BC the Greek states gradually fell to the advance of the Romans, and by 146 BC the whole country had became a part of the Roman Empire, treasured for its cultural heritage.

xxxxxWith the coming of the barbarian invasions from the 5th to the 7th century, ancient Greek civilisation, like that of Rome, finally came to an end. However, much of Greece, together with its language and culture, survived as part of the Byzantine Empire, the eastern half of the Roman Empire which had been established by Emperor Constantine in 324. For the most part, this situation remained until the opening years of the 13th century when, ironically enough (as we have seen) it was the Crusaders who, in 1204 sacked Constantinople and took over Greece as well as Anatolia. All except the rugged interior was divided into states, governed by Western magnates or by the maritime republics of Venice and Genoa.

xxxxxThis occupation lasted until 1453 (H6). It was then that Constantinople was captured by the Turks, and Greece found itself part of the expanding Ottoman Empire. Turkish rule, as elsewhere, was harsh, but, some islands, such as Rhodes and Crete, held out for many years and, once again, the central, mountainous areas were little affected. Furthermore, quite a large number of Greeks were retained as administrators, and the Orthodox Church was left in tact, providing, as it so happened, a focus for Greek nationalism. Nonetheless, Greece remained under Turkish domination for close on 400 years. It was not until the latter part of the 18th century, in 1770, that Turkish rule was challenged. The attempt failed, but the coming of the French Revolution kept alive the flame of rebellion. A powerful secret society (the Friendly Society) was formed in 1814, and this began making plans for a widespread armed revolt. When it came, it was to be a bloody, cruel conflict with atrocities committed by both sides. 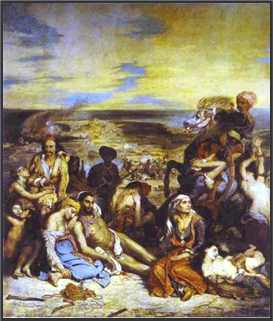 xxxxxFor the first three years of the war the Greeks fought virtually alone, their cause seriously hampered by constant strife between various factions, and a consequent lack of coordination. The revolt broke out in Wallachia in February 1821, spread to Moldavia the following month, and then led to a general uprising in the Peloponnese, led by Germanos, archbishop of Patros. The rebels met with only limited success, but in 1822 they adopted a liberal republican constitution, declared their independence, and appealed to Tsar Alexander I for Russian support. It was in that year that the Turks invaded Greece in force and their fleet captured the island of Chios and massacred its inhabitants - the Chios Massacre (illustrated right).

xxxxxIn 1824 the war escalated. The ruler of Egypt, Muhammad Ali, wooed by the promise of substantial territorial gains (including Crete), joined forces with the Sultan of Turkey, Mahmud II. By 1826, he and his son, Ibrahim Pasha, had conquered the whole of the southern peninsula of Greece, the Peloponnese. The following year, 1827, saw the turning point as far as the Greeks were concerned. The Turks entered Athens in that year but, by the Treaty of London, Russia, Britain and France, alarmed above all by the intervention of Muhammad Ali and his territorial gains, agreed to recognise Greek independence, and to persuade the Sultan to come to terms. Though the British government regarded this action as “peaceful interference”, in the October of that year a combined allied naval force took the opportunity to destroy a Turco-Egyptian fleet at the Battle of Navarino, the last great naval engagement to be fought in the age of sail. Then in April of 1828 Russia, regarding itself as the protector of Orthodox Christians, officially declared war against Turkey. 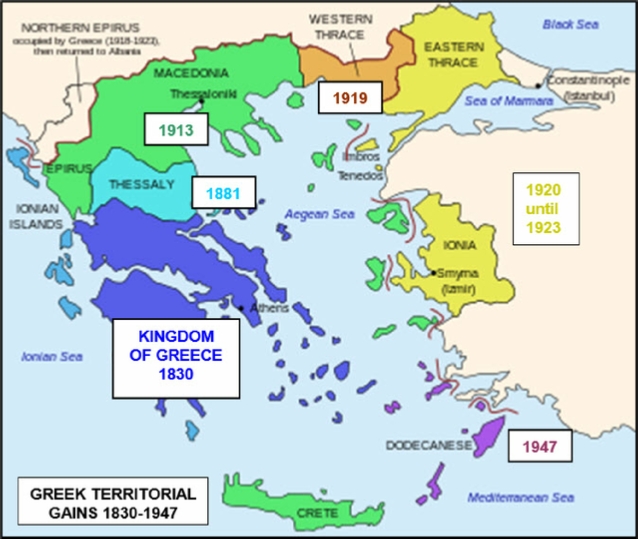 xxxxxIt was at this stage that Muhammad Ali agreed to British demands to quit Greece, andxin September 1829 the Treaty of Adrianople (sometimes known as the Treaty of Edirne) brought an end to the Russo-Turkish War. By its terms the Turkish government granted autonomy to Greece, Serbia and the Danube provinces of Moldavia and Walachia, and gave Russian shipping access to the Mediterranean Sea. Finally, in February 1830 the London Conference formally declared Greek independence under the protection of the three allies. A period of great civil unrest followed, but the main aim of the war had been achieved.

xxxxxIncidentally, (see map above), the Greece that gained its independence in 1830 was considerably smaller than the modern nation. It was made up of only the southern part of the peninsula and the Cyclades, a group of some 30 islands in the Aegean Sea. The Ionian Islands were not ceded by Britain until 1864, and the annexation of northern Greece, achieved in three stages, was not completed until 1922. And it was only at the end of the Second World War in 1947 that Italy relinquished Rhodes and the Dodecanese, a group of islands off the south-west coast of Turkey. ……

xxxxx…… Although, in 1821, the reactionary governments of Europe were anxious to maintain the existing order - as hammered out at the Congress of Vienna - there was, nonetheless, a great deal of public support for the Greek cause. Money was raised across Europe and the United States to finance the uprising, and many volunteers arrived in Greece to join the rebels, including the English poet Lord Byron. He arrived at the port of Missolonghi in 1823 and, by all accounts, did much to rally the troops before he died of a fever in April the following year. …… 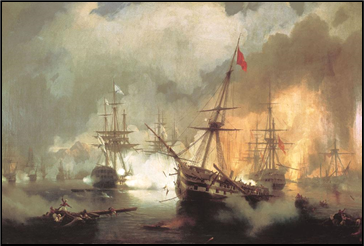 xxxxx…… ThexBattle of Navarino, fought in October 1827, proved to be decisive because the destruction of their fleet left the Turks in Greece with no supply line and no ready means of escape. In fact, however, it was a battle which was not meant to be. The Allies, wishing to persuade the Turks to grant the Greeks independence, sent a combined fleet to Navarino to negotiate a Turkish withdrawal. Mistaking their intention, a Turkish ship fired on a British gunboat as it approached, and battle was joined! In less than two hours the Turko-Egyptian fleet had been all but destroyed. …… 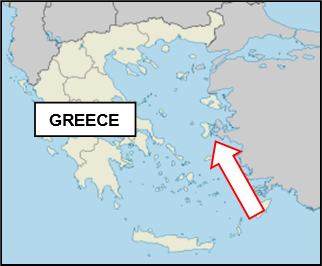 xxxxxX…… Somexof the money raised to support the independence movement went to the survivors of the infamous “Chios Massacre” of 1822. Having occupied the island, the Turks slaughtered all males over the age of 12 and all women over 40, the total estimated at 25,000, but put much higher by some sources. The remainder, well over double that number, were sold in the slave markets of Turkey, Africa and the Middle East. This atrocity, by far the worst of the war, aroused an enormous amount of sympathy and practical support for the Greek struggle for independence, especially as some youngsters managed to escape - the “Children of Chios” - and told their harrowing stories across Europe and the United States. Indeed, some historians argue that without this event, support for the Greeks would have been insufficient to secure the country’s freedom. ……

xxxxx…… The massacre was vividly captured on canvas by the French painter Eugène Delacroix (illustrated above), and the French poet and novelist Victor Hugo wrote a poem entitled L’enfant de Chios. The first two verses are given below:

The Turks have passed here. Destruction is everywhere.

Chios, the isle of vines, lies black and bare -

Chios, in the leaves shade,

Whose seas used to reflect its wooded height,

Its slopes and villas, and sometimes at night

The girls who danced and played.

Deserted. No: beside the blackened stone

And bows his downcast head.

His only stronghold and security

Is a white hawthorn - a bloom equally

Ignored among the dead...