xxxxxElegy Written in a Country Churchyard, the work of the English poet and scholar Thomas Gray, was written in 1750 and published the following year. While contemplating the graves at the church of Stoke Poges in Buckinghamshire, he reflects upon the value of life, the meaning of death, and the transience of human existence. Rich or poor, humble or mighty, all paths "lead but to the grave". A quiet, studious man of immense learning, he spent most of his life at Cambridge, immersed in the study of natural science and the ancient past, quite indifferent to the fame that his poetry brought him. His poetic works included Progress of Poesy, The Bard, the witty Ode on the Death of a Favourite Cat, and his delightful collection of letters, providing an insight into the thoughts of a very private man, and anticipating the famous essays of the English writer Charles Lamb. His passionate interest in nature and primitive art, the depth of his feelings, and the gentle melancholy that pervades much of his work (he was a member of the so-called "graveyard school" of poets) mark him out as a precursor of the romantic movement. He was a close friend of the English novelist Horace Walpole. 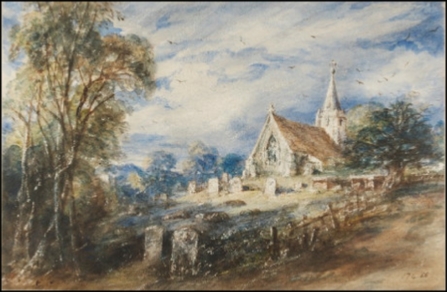 xxxxxElegy Written in a Country Churchyard, the major work of the poet and scholar Thomas Gray, is one of the most moving and best known poems in English literature. In dignified, measured terms, it contemplates death in general by paying tribute and respect in particular to the lives of those who happen to lie buried in the churchyard of a small English village - Stoke Poges in Buckinghamshire (illustrated). Their deaths - be they poor or rich, humble or mighty - are but a timely reminder to us all of the transience of life. The poem, which took some eight years to compose, was completed in 1750, and published the following year. It received instant acclaim for its powerful thought-provoking message, and the sombre beauty in which it was expressed. Two verses must suffice:

Their homely joys, and destiny obscure;

Nor Grandeur hear with a disdainful smile

The short and simple annals of the poor.

The boast of heraldry, the pomp of pow'r,

And all that beauty, all that wealth e'er gave.

The paths of glory lead but to the grave. 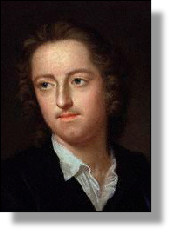 xxxxxGray was born in London, and attended Eton public school from the age of eight. There he met and became a close friend of the novelist Horace Walpole and the poet Richard West. He studied at Cambridge university and then, together with Walpole, went on a tour of France, Switzerland and Italy, starting in 1739. By all accounts the trip was not a complete success, probably due to their diverging interests. On his return in 1741, he lived for a while with his mother in the village of Stoke Poges, Buckinghamshire. He then returned to Cambridge, where he spent the rest of his life.

xxxxxHe was a man of immense learning and, quite apart from the classics, acquired a knowledge of Celtic and Old Norse. A quiet, studious man who enjoyed scholarly research, he was quite indifferent to fame and fortune. Indeed, to him poetry was simply at the whim of inspiration, not a vocation. It was doubtless for that reason that he turned down the title of poet laureate. His main interest lay in history, natural science and the ancient past, celtic and Icelandic as well as medieval. In 1768 he was appointed Regius professor of modern history at the university of Cambridge. 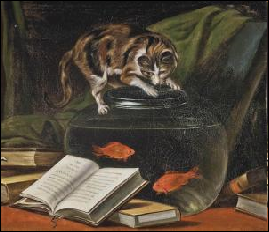 xxxxxHis literary output was small and many of his works remained unpublished, but his Elegy, together with his Progress of Poesy and The Bard - written in the poetic form of the Greek poet Pindar - and his witty mock-heroic Ode on the Death of a Favourite Cat (that of Horace Walpole) - “drowned in a tub of goldfishes” - have secured for him the fame he never sought. Worthy of note, too, are his Ode on a Distant Prospect of Eton College and Sonnet on the Death of Mr Richard West, both concerned with the premature death of his friend in 1742. His lively letters, which include an account of his tour with Walpole, give an insight into the interests and thoughts of this very private man. They are delightfully and wittily written, and, providing as they do some well-reasoned criticism of people and their works, anticipate the famous essays of the English writer Charles Lamb.

xxxxxGray excelled in simplicity of form and lucid thought, though at times the meaning of that thought could be somewhat obscure. In the history of English literature he must be seen as a precursor of the romantic movement. His passionate interest in nature and primitive art, the very depth of his feelings, and his flights of imagination are far removed from the restraint and ordered form so typical of Neoclassicism. And this move towards Romanticism is particularly evident in the gentle melancholy that pervades much of his work, making him one of the leading figures of the so-called "graveyard school", a group of poets fascinated by death, bereavement and the after-life. Gray died in 1771. As was only fitting, he was buried in the graveyard of his home village of Stoke Poges, in the very spot which had inspired him to write the Elegy and had brought him lasting fame. Illustrated here is the monument erected in his honour.

xxxxxIncidentally, we are told that the British commander General James Wolfe recited the Elegy before the Battle of Quebec, and confessed at that time that he would rather go down in history as the author of that poem than as the conqueror of the city he was about to attack. ......

xxxxx...... William Blake, the English poet and artist, made illustrations for Gray's poems, and for Edward Young's Night Thoughts (illustrated below). 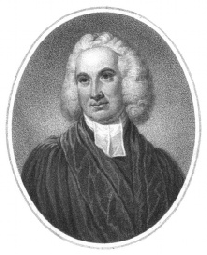 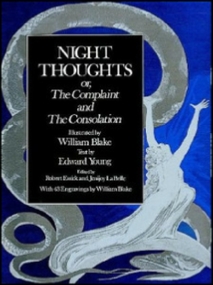 xxxxxAnother prominent member of the "graveyard school" was Gray's contemporary, the English poet Edward Young (1683-1765). He was born in Upham, Hampshire, studied at Oxford and from 1730 was the rector for the parish of Welwyn, Hertfordshire. His principal work, completed in 1745, was the long and sombre meditative poem in blank verse entitled Night Thoughts on Life, Death and Immortality. Composed of nine parts , or "Nights", it was apparently inspired by a succession of deaths in his own family - his stepdaughter in 1736, her husband in 1740, and then his own wife a year later. It dwells, as one would expect, on the sadness and pain of bereavement, and, like Gray, solemnly alludes to the transitory nature of human life. 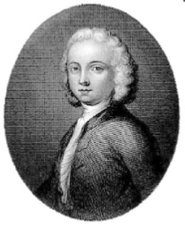 xxxxxMention must also be made of two other poets who anticipated the romantic movement at this time. William Collins (1721-59) was born in Chichester, Sussex. He attended Winchester College, and worked in London after 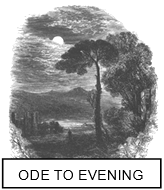 completing his studies at Magdalen College, Oxford in 1743. His lyrical Odes on Several Descriptive and Allegorical Subjects of 1746 - which includes his best known poem To Evening -, and his unfinished Superstitions of the Scottish Highlands, are particularly romantic in content and feeling. Other works include his four Persian Eclogues, written at the age of 17, and his poem How Sleep the Brave of 1747, written in honour of the soldiers who were killed at the Battles of Fontenoy and Culloden (first stanza given below.)

How sleep the brave, who sink to rest

By all their country's wishes blest!

When Spring, with dewy fingers cold,

Returns to deck their hallow'd mould,

She there shall dress a sweeter sod

Than Fancy's feet have ever trod.

xxxxxThe ending to his short life was a tragic one. He became mentally ill in 1751, and entered a mental asylum three years later. He spent the last five years of his life at Chichester, cared for by his sister. He was a friend of the English man of letters Samuel Johnson, and of his fellow poet James Thomson, on whose death, in 1748, he wrote his Elegy on Thomson. 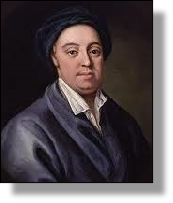 xxxxxCollins' friend James Thomson (1700-1748) was born at Ednam, Roxburgh, Scotland, and attended Jedburgh grammar school before studying at Edinburgh University. He went to London in 1725, and soon afterwards began work on his most famous poem The Seasons, the fourth part (Autumn) being completed in 1730. This was a remarkable work not simply for its idealisation of nature - a powerful romantic theme - but because it was the first poem to take nature as its subject matter, concluding, indeed, with a Hymn to Nature.

xxxxxOther works included To the Memory of Sir Isaac Newton of 1727, the Castle of Indolence, written in 1748 as a warning against idleness, and his famous ode Rule, Britannia, put to music by the London composer Thomas Arne in his Alfred, a Masque of 1740.

xxxxxIncidentally, The Seasons provided the libretto for an oratorio by the Austrian composer Franz Joseph Hayden. Produced in 1801, its delightful musical interpretation of changing events in nature proved highly successful.