xxxxxThe Frenchman Charles François Gounod is best known today as the composer of the opera Faust, based on the play by the German poet and dramatist Johann Wolfgang Goethe and first performed in Paris in 1859. He studied music at the Paris Conservatoire and then in Rome, and turned to composing opera in 1852. Apart from Faust, which became a huge success, his operas Le Médecin Malgré Lui, Mireille and Romeo and Juliette were quite well received. He also wrote a great deal of sacred music, including his Solemn Mass of 1849, his oratorios Redemption and Life and Death, and his Ave Maria, a meditation based on a prelude by the German composer Johann Sebastian Bach. His lamentation Gallia was composed following the French defeat in the Franco-Prussian War of 1870. He lived in England in the early 1870s, and played a prominent part in the founding of the Royal Choral Society. His compositions were full of melody and harmony, and he was a brilliant orchestrator. Faust has been performed in cities across the world and remains a highly popular opera. During his career Gounod met the German composer Felix Mendelssohn and the French artist Jean Ingres. 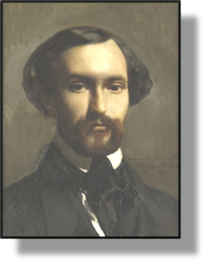 xxxxxThe Frenchman Charles-François Gounod is best known today as the composer of the popular opera Faust, first performed in 1859. Among his other works were his operas Le Médecin malgré lui of 1858, and Romeo and Juliette of 1867, and a large amount of church music, including his Solemn Mass of 1849 and his Meditation of 1889, known as his “Ave Maria”. He studied in Rome in the early 1840s, and lived in England for five years, during which time he played a part in the founding of the Royal Choral Society.

xxxxxGounod was born in Paris and received his early musical training from his mother, a competent pianist. He attended the Lycée Saint-Louis and, after taking a degree in philosophy, began his study of music in earnest, first by private tuition and then at the Paris Conservatoire under the French composer Jacques François Halévy. In 1839 he won the Prix de Rome in music with his cantata Fernand, and this gave him three years of further study in Italy. While in Rome he spent a great deal of his time studying early Italian church music, and was influenced in particular by the works of the Renaissance composer Giovanni Palestrina. During his return journey to Paris he had two of his works performed in Vienna, a mass and a requiem, and visited the German composer Felix Mendelssohn at Leipzig.

xxxxxOnce back in Paris he decided to become a priest, and for the next two years gave much of his spare time over to the study of theology while working as organist and choirmaster at the Church of the Missions Étrangères. In 1846 he entered the seminary of Saint-Sulpice to take holy orders, but the following year chose to leave and return to composing. It was then that he began writing for the operatic stage.

xxxxxHis first attempts, Sapho, performed in 1851, and La Nonne sanglante (The Bloody Nun), three years later, were not well received, and his Messe de Sainte-Cécile of 1855, though more secular in style, also failed to impress. In 1858, however, his comic opera Le Médecin malgré lui  (The Doctor in Spite of Himself) based on Molière’s famous comedy, brought him his first taste of success, and gave him the necessary confidence for his next operatic work Faust. In the meantime, Gounod had been appointed conductor of the Orphéon Choral Society in Paris, and was becoming known for his choral w 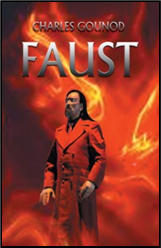 ork, as well as an increasing amount of Church music.

xxxxxGounod began working on Faust in 1852, based on the poetic tragedy of that name by the German poet and dramatist Johann Wolfgang Goethe, and employing a libretto by the Frenchmen Jules Barbier and Michel Carré. Produced in five acts, it had its first performance at the Théâtre-Lyrique in Paris in 1859. It was quite well received and made him the most successful opera composer of his time, though, in fact, even greater acclaim for the work came some years later after Gounod had revised the score and, later still (in 1869) had added a ballet to the performance. Since then it has been produced in opera houses across the world. 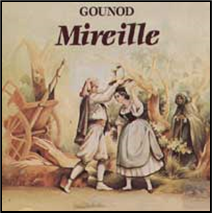 xxxxxIn his future operatic compositions - nine in number - Gounod never surpassed the quality of Faust, though both his Mireille of 1864 and his Romeo and Juliette, based on Shakespeare’s play and produced three years later, could be termed successful. His sacred music was extensive and included oratorios, cantatas, masses and a variety of vocal pieces. Notab

le among this church music were his Solemn Mass  of 1849, his oratorios Redemption and Life and Death, his Ave Maria, a meditation for soprano and instruments, based on a prelude by the German composer Johann Sebastian Bach, and his Gallia, a lamentation for soprano, chorus and orchestra, composed following the French defeat in the Franco-Prussian War of 1870. And during his five years in England in the early 1870s he formed a choir which became the nucleus of the Royal Choral Society. He also composed two symphonies, a number of piano pieces, including the zany Funeral March for a Marionette, and many songs.

xxxxxGounod had the ability to create music which was full of melody and harmony. Musical ideas, he once said, came to his mind like a flight of butterflies, and he had only to stretch out his hand and catch them. He was also an expert orchestrator and composed well for the voice, and when these gifts came together, as they did in Faust and a number of his sacred pieces, his music had a rare and unforgettable beauty. Certainly his music for Faust, though somewhat lacking perhaps in dramatic effect and characterisation, has a lyrical quality which has delighted audiences all over the world, and continues to do so. For his services to music, he was elected a member of the Institute of France in 1866, and made an officer of the Legion of Honour in 1888. 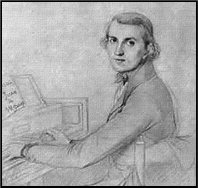 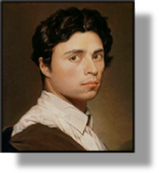 xxxxxIncidentally, while playing the piano during his stay in Rome, the young Gounod was often accompanied by the French neo-classical artist Jean Ingres (illustrated left), an amateur but accomplished violinist. Ingres made a pencil drawing of him in 1842 (illustrated right), and this is now on display in Chicago’s art institute. ……

xxxxx……  Gounod taught occasionally at the Paris Conservatory. One of his students in the 1850s was the French composer Georges Bizet. He produced his The Pearl Fishers in 1863 (Vb), and is best known for his opera Carmen, first performed in 1875.