xxxxxAs we have seen, the British occupied Egypt following the Anglo-Egyptian War of 1882, but they were determined not to become involved in the affairs of the Sudan, then under Turko-Egyptian rule. However, when a rebellion in that country began to grow in strength - started in 1881 by a religious fanatic named Muhammad Ahmad - the British government became concerned. By the end of 1883 this charismatic leader, claiming to be the Mahdi (the messianic redeemer of the Islamic faith) had gained control over much of the Sudan, and had roundly defeated an Anglo-Egyptian army at the Battle of El Obeid. As a result, the British government persuaded the Khedive of Egypt to withdraw his garrisons from his vassal state, and appointed General Charles “Chinese” Gordon, a man who had been governor general of the Sudan, to carry out this task. On arriving at the capital, however, he strengthened the capital’s defences, and in March 1884 the Mahdi laid siege to the city. To meet this threat Gordon called for reinforcements, but the government remained unwilling to support a military intervention. Eventually, after a public outcry, it sent a relief column, commanded by General Lord Garnet Wolseley, but this was delayed by the Battles of Abu Klea and Abu Kru, and arrived two days too late. On January 25th 1885 the Mahdi broke into Khartoum and the entire garrison, including Gordon, was slaughtered. As we shall see, the British returned to the Sudan in the mid-1890s, and their victory at the Battle of Omdurman in 1898 was seen to avenge the tragic event of January 1885.

THE DEATH OF GENERAL CHARLES GORDON 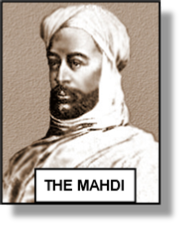 xxxxxItxwas a year before the outbreak of the Anglo-Egyptian War which, as we have seen, took place in 1882, that a serious rebellion erupted in the neighbouring state of Sudan. A charismatic religious fanatic named Muhammad Ahmad (1845-1885) (illustrated), claiming to be the Mahdi, the messianic redeemer of the Islamic faith, led a zealous revolt against the harsh rule of their foreign masters, the Egyptians and their Turkish overlords. Burdened as the Sudanese were by heavy taxes and the cruelty of a repressive regime, he gradually won over the tribes of west and central Sudan and eventually gained sufficient strength to take on the military might of the Turko-Egyptian government. InxNovember 1883 the Ansar - the Mahdi’s devout followers - overwhelmed an Anglo-Egyptian army of some 8.000 near El Obeid in central Sudan, thereby gaining valuable equipment. ThexEnglish commander, General William Hicks (1830-1883) and all his senior officers were killed, and barely 500 men managed to escape the massacre.

xxxxxThe British looked on with concern. From the time of their conquest of Egypt in September 1882 they had insisted that Sudanese affairs were a domestic matter for the Khedive. However, In view of the deteriorating situation in this vast country, in December 1883 the British government, led by prime minister William Gladstone - a man opposed to rash colonial ventures - persuaded the Khedive to withdraw his garrisons and leave the Sudan to its fate. Any military involvement, it was argued, would prove very difficult, time consuming, and highly expensive. To carry out this task of disengagement the government chose General Charles Gordon (1833-1885), a man who had distinguished himself in earlier campaigns - notably during the Taiping Rebellion in China - and for five years, beginning in 1876, had served as governor-general of the Sudan. 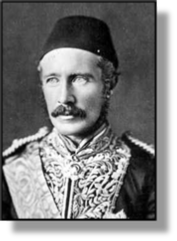 xxxxxIn view of Gordon’s knowledge of the country, the choice might appear to be a good one. But it was perhaps a little questionable to ask a man who had done so much to develop the Sudan to preside over its downfall. Certainly in a letter to The Times in January 1884, just before leaving to take up his appointment, Gordon (illustrated here) made it clear that in his view the correct strategy would have been to defeat the Mahdi in order to avoid the possibility of a threat to Egypt itself. This aggressive policy was supported, among many others, by General Lord Garnet Wolseley. 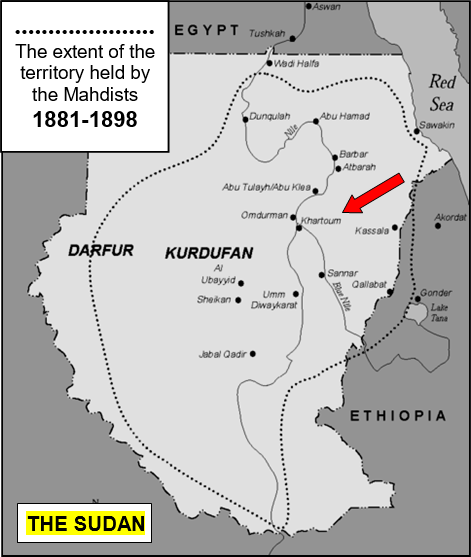 xxxxxOn arrival at Khartoum (arrowed on map), Gordon was warmly welcomed as the saviour of the city and in many respects he acted the part. In the early days he did manage to evacuate 2,500, including many women and children, but he spent most of his time improving and extending the city’s defences. He provided gun boats to patrol the Blue and White Nile to the north and west, and in the south - open to the desert - he built an elaborate system of trenches, set up wire entanglements, and laid down land mines. At various times he asked for troop reinforcements - including a regiment of Turkish soldiers, a unit of Indian troops and 200 British infantry - but on each occasion he was refused. Determined to “smash up” the Mahdi, he then complained bitterly that the government was “abandoning the garrisons” (such as those besieged at Sennar, Tokar and Sinkat). This claim attracted a deal of support at home, and almost brought down the government, but the cabinet refused to be pushed into what it saw as military intervention. 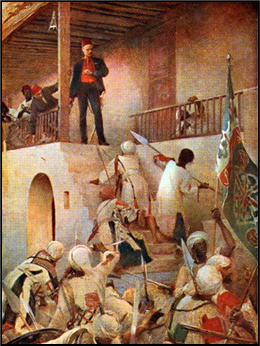 xxxxxThexten-month Siege of Khartoum began in March 1884. The Mahdi force then besieging the city was put at 30,000, but it was increasing daily, and at Suakin in east Sudan Egyptian troops were being repeatedly defeated. A British force was sent, in fact, to hold back the rebels in that area, but in April 1884, after severe fighting, this was withdrawn and, save for Khartoum, the Sudan was abandoned. The city, with a civilian population alone of 34,000, had enough food for just six months. Two attempts were made to break out, in March and September, but both failed and suffered heavy loses. By then the tribes to the north had risen in support of the Mahdi and this more than doubled the attacking force.

xxxxxIn England there was an ever growing demand for the sending of a relief force. Eventually in July the cabinet put plans in motion, but it took several months to set up, and it did not enter the Sudan until January. It was then attacked at Abu Klea on January 17th and two days later at Abu Kru. Commanded by General Lord Garnet Wolseley, the column repelled both assaults, but this only spurred on the Mahdi to press home his attack on the besieged city. The attack was mounted on the night of January 25th 1885. The Nile was low in water and this enabled the city to be approached from both north and south. Entrance was gained in the early hours of the morning and the whole garrison - about 7,000 - was slaughtered, together with 4,000 inhabitants. Many others were captured and taken into slavery. There was sporadic resistance, but the men were too tired and hungry to put up much of a fight. It is not known how Gordon met his death. The popular version is that, defiant to the end and dressed in full uniform, he was killed on the steps of his residence (illustrated here by the Irish artist George W. Joy 1844-1925). It is known, however, that he was beheaded and his head, after being presented to the Mahdi, was put on public display. The advanced party of the relief column arrived within sight of the city two days later. The surviving British and Egyptian troops then withdrew from the Sudan and left Muhammad Ahmed in control of the entire country. He died a few months later, but not before he had established a religious state, the Mahdiyah, based on Islamic Sharia Law.

xxxxxIn the wake of the disaster General Gordon was seen as a hero and a martyr. The British press blamed Gladstone for the debacle, arguing that he should have sent a relief column earlier. Possibly so, though it is likely that it would only have served to bring forward the attack on the beleaguered city. Gordon’s conduct must also be questioned. His stubborn desire to take on the Mahdists somewhat coloured his judgement, and tended to divert his attention from his appointed task. With hindsight, however, it might well be said that, given the circumstances then prevailing in the Sudan in 1884, the task set by the government and assigned to Gordon was not achievable. Gladstone’s government fell the following June, but he was returned to office the next year. 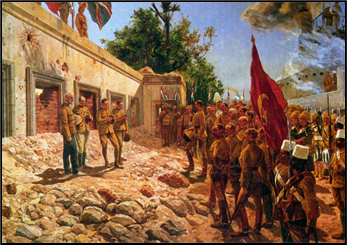 xxxxxAs we shall see, in the mid-1890s the British were back in the Sudan. The Battle of Omdurman in 1898, when the bulk of the Mahdist army was roundly defeated, might be seen as the settling of old scores, but there were, of course, more pressing reasons for Britain’s return to this vast territory. Nevertheless, the tragedy of January 1885 was not forgotten. Two days after Omdurman a memorial service for Gordon was held in front of the ruins of the palace where he was brutally killed (here illustrated).

xxxxxIncidentally, “Gordon of Khartoum” was born in Woolwich, London, in 1833, and educated at the Royal Military Academy there. As a young man he fought in the Crimean War, taking part in the siege of Sevastopol in 1854-5. The square in the centre of Woolwich is named after him. ……

xxxxx…… There are many statues and memorials to him at home and abroad. He is especially remembered in Gravesend, Kent, (illustrated), where, after returning from his gallant service in China in 1865, he worked improving the river defences. A devout Christian with a strong social conscience, he spent his leisure time working for a number of local charities and visiting the sick and elderly. ……

xxxxx…… The Scottish author Arthur Conan Doyle paid tribute to Gordon in The Adventure of the Empty House, one of his Sherlock Holmes stories. In the novel he describes the palace where he was killed. And the English writer Lytton Strachey takes Gordon as one of his biographies in his famous work Eminent Victorians, first published in 1918.