xxxxxSupport for James II remained in Scotland despite the Glorious Revolution of 1688. In July the following year, for example, Viscount Dundee (“Bonnie Dundee”) raised an army and won a resounding victory against government forces at the Battle of Killiecrankie. The rebellion was later crushed, but opposition to William III remained, so the government offered a pardon to all those clans who swore allegiance to the new king. All agreed to do so, but the MacDonalds of Glencoe just missed the closing date. As a result, in February 1692 about 120 members of the Campbells, a rival clan, paid a visit to the MacDonalds and, a week later, rose up against their hosts, killing many and driving out the rest. This massacre, eventually blamed on the Secretary of State for Scotland, intensified Scottish hatred towards the English, as shown in the Scottish support given to the Jacobite rebellions of 1715 (G1) and 1745 (G2). 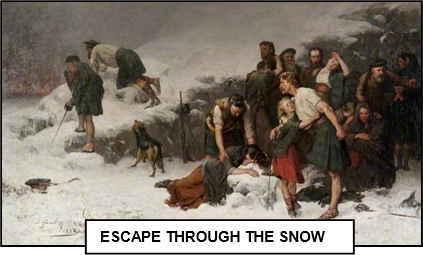 xxxxxDespite the widespread acceptance of the Glorious Revolution of 1688, there was armed resistance to the new Protestant monarchs, William III and Mary II, over the border and, as we shall see, across the Irish Sea. In Scotland, thexrevolt was led by the Scottish soldier Viscount Dundee, a loyal servant of James II. When the king was deposed by William of Orange in December 1688, “Bonnie Dundee” (as he was called) raised an army in the Highlands and went on the attack. In July 1689 he won a resounding victory against government forces in a narrow wooded pass known as Killiecrankie, but during the fight he was mortally wounded. Deprivedxof his leadership, the Scottish rebellion was crushed at the Battle of Dunkeld the following month.

xxxxxBut despite this defeat, many Scottish clans continued to remain loyal to James II. To bring these clans to heel, in August 1691 the government offered a pardon to all those chiefs who swore allegiance to the new monarchs by the end of the year. It was anticipated that a number of the prominent chiefs would refuse to sign but, in fact, all agreed to do so. However, Alexander MacDonald, chief of the MacDonalds of Glencoe, delayed his submission until the 31st December - doubtless as a form of protest. The story goes that he then rode to Fort William in a blizzard, but on arrival found that there was no magistrate there to receive it. He then journeyed to Inveraray and eventually swore allegiance before the sheriff on the 6th January. 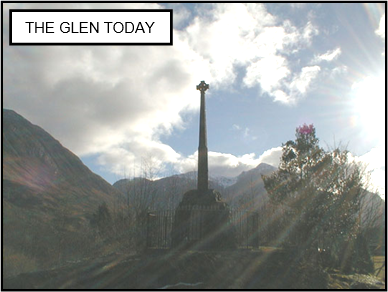 xxxxxAs far as the military authorities were concerned this was a failure to comply with the terms of the amnesty. As a consequence, an order for punishment was issued, signed by William III himself. Sir John Dalrymple, secretary of state for Scotland, was tasked with carrying out the order. He believed, wrongly as it so happened, that the MacDonalds were Roman Catholics and that severe action would be popular with his new master. In February 1692 about 120 members of the Campbells, a rival clan, were sent on a visit to the MacDonalds at Glencoe and, after a week living amicably amongst them, suddenly turned against their "hosts". In the massacre that followed, the chief, Alexander MacDonald, 33 men, two women and two children were butchered. The rest of the clan managed to escape, but many perished in the bitter winter conditions.

xxxxxThe commander of the Campbells, the earl of Argyll, is generally thought to have been implicated in the plan to carry out the massacre, as is one of his officers, Captain Robert Campbell of Glenlyon. Both had good reason to dislike the MacDonalds. However, in 1695 a public inquiry, demanded by the Scottish Parliament, found Sir John Dalrymple responsible for the planning of the outrage. Whoever was to blame, the massacre only served to intensify and prolong Scottish hatred towards the English. As we shall see, the Highland Scots were to show a remarkable readiness in supporting the Jacobite rebellions of 1715 (G1) and 1745 (G2).

xxxxxIncidentally, at the Battle of Killiecrankie, fought in July 1689, the English soldiers used bayonets for the first time.