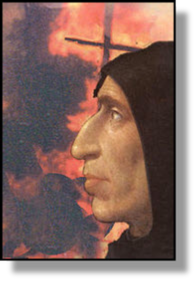 xxxxxThe Italian religious reformer Girolama Savonarola was born at Ferrara of a noble family. He began his ecclesiastical life as a Dominican friar, and early in his career taught at the priory of San Marco in Florence. It was here that, as an eloquent and powerful preacher, he began his moral crusade, calling for a return to the basic Christian virtues and bitterly attacking religious as well as political corruption. Returning to Florence in 1490 after a short time preaching in northern Italy - at the invitation, believe it or not, of Lorenzo the Magnificent (1469 E4) - he then openly attacked the vices and abuses of the Medici family, then ruling the city, and gained much popularity as a result. (The profile of Savonarola is by the Florentine artist Fra Bartolommeo - studied below)

xxxxxWhen the French invaded the city in 1494 and the Medicis were expelled - an event which Savonarola claimed to have foreseen - the reformer turned politician and seized the opportunity to put his somewhat gloomy creed into practice. Establishing a “democratic” republic, he virtually became a dictator, dubbing himself a prophet of God and introducing a programme of strict moral reform. Such was his hold on the populace that in 1494, when he ordered what he called the “burning of the vanities”, thousands of people crowded into the Piazza della Signoria to throw their valuable possessions - jewellery, paintings, books - on to a huge bonfire. He thus set about making Florence into a theocracy, a City of God on earth, and, in so doing, he preached ever louder against the shortcomings of the Church in general and the private life of its leader in particular.

xxxxxThis leader, at the time, was the Borgia Pope Alexander VI, who earlier, in 1493, had applauded Savonarola’s zealous programme of reform and, indeed, had named him the papacy’s first vicar general. He now became much alarmed at the turn of events. He forbade him to preach until an enquiry had been held. An uneasy truce followed, but Savonarola soon returned to the attack, and in 1497 he was excommunicated, an act he simply chose to ignore.

xxxxxBy now, however, his stringent political reforms within the city of Florence, aimed at the repression of vice, were proving increasingly unpopular, and a party of the Medici family (known as the Arrabbiati, “the angry ones”) was gaining support. Then when Savonarola executed five of the Arrabbiati as “conspirators” the populace turned against him. In 1498 he was arrested, tortured, and, after being tried for sedition and “religious errors”, was hanged and burned. A stone plaque in the Piazza della Signoria marks the exact spot where he was executed - very close indeed to where the “burning of the vanities” had taken place four years earlier.

xxxxxSavonarola’s dedication to his cause, though downright fanatical, is to be admired at a time when such outspoken criticism would clearly not be tolerated. He was virtually born to be a martyr. Educated by his paternal grandfather, a man of high religious principles, he had spoken in his youth of “the blind wickedness of the peoples of Italy”. Throughout his life of devotion, this attack upon the sins of society and the corruption and abuses within the church and state never faltered. A man devoted to the study of scripture - and greatly influenced by the writings of the Italian theologian Thomas Aquinas - his major work, Triumphus crucis, was a clear exposition of the Christian faith.

xxxxxThe Italian religious reformer Girolama Savonarola called for a return to the basic Christian virtues and attacked religious and political corruption. When the French invaded Florence in 1494 and expelled the Medici, he seized power and held sway over the city, introducing strict moral reforms. In 1497, however, he was excommunicated and, when he executed five members of the Medici family the populace turned against him. In 1498 he was arrested and executed. A devout, albeit fanatical Christian, he was greatly influenced by the works of the Italian theologian Thomas Aquinas. His major work Triumphus crucis was a clear exposition of the Christian faith.

xxxxxLike Sandro Botticelli, (1478 E4), the Florentine artist Fra Bartolommeo was seriously affected by the preaching and execution of Savonarola. In 1500 he destroyed all his drawings and paintings of the nude figure and joined the Dominican Order. Confining his work to religious subjects, his style was influenced by Raphael and Michelangelo, and he began to use the richer colours of the Venetian school. Among his finest paintings were two deeply moving works, his Madonna of Mercy and his Pietà. 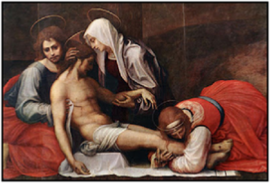 Sandro Botticelli, whose work, as we have seen earlier (1478 E4), was seriously affected by the preaching and execution of Savonarola, the Florentine artist Baccio della Porta (1472-1517) was also moved by the preacher's teaching and martyrdom. In 1500 he suspended his painting career and joined the Dominican Order, taking on the name of Fra Bartolommeo, and, so we are told, destroying all his drawings and paintings of the nude figure.

xxxxxAs a young man he served in the workshop of Cosimo Rosselli - one of the painters of the Sistine Chapel - and his early work The Annunciation shows the influence of the Umbrian artist Perugino, notably in the balance achieved in its composition. After joining the Dominicans, he returned to painting in 1504 and, as might be expected, concentrated upon religious subjects for the rest of his career. His first major work, Vision of St. Bernard, anticipated the style of the High Renaissance, and this trend became more marked after he visited Rome and saw the works of Raphael and Michelangelo. In the meantime he had visited Venice and begun to use the richer colours associated with the Venetian school.