xxxxxThe Gibraltar peninsula, a rock fortress in southern Spain commanding the 20-mile strait which divides Europe from Africa, was captured by the Muslim commander Tariq ibn Ziyad in 711 and named after him (Jabal Tariq meaning Mount Tariq). The Muslims were forced to abandon the fortress in 1462, however, and it was annexed by Spain in 1501. As we shall see, it was captured by the British in 1704 (AN), during the War of the Spanish Succession, and has remained a British possession ever since.

xxxxxThe narrow peninsula of Gibraltar and its 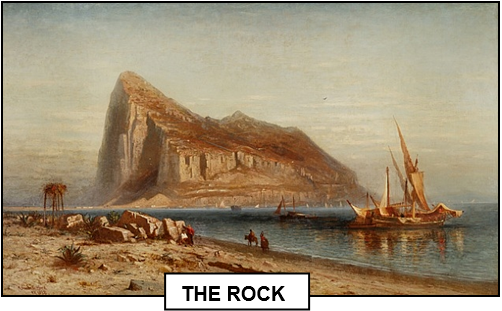 famous Rock is situated on the Mediterranean coast of southern Spain over looking the 20 mile strait which divides Europe from Africa at this point. It is only three miles long and less than a mile wide, and is dominated by a limestone rock rising to 1,396 feet at its southern end. A natural fortress commanding the western entrance to the Mediterranean, it was captured by the Muslim commander Tariq ibn Ziyad in 711, and the rock was named Jabal Tariq (Mount Tariq) in his honour. The word Gibraltar derives from this name.

xxxxxMuslim occupation was finally ended by the Spanish in 1462, and Gibraltar was annexed to Spain in 1501 by Queen Isabella I of Castile and Aragon. As we shall see, it was captured by Sir George Rooke in 1704 (AN) during the War of the Spanish Succession, and the British have remained in possession of the Rock ever since, despite a number of military sieges.

Gibraltar and Mount Abyla, which is situated across the Strait on the Moroccan coast, have been known since ancient times as the Pillars of Hercules. According to classical mythology, Hercules, the Greek hero famous for his courage and strength, created the Strait of Gibraltar by forcing apart the two heights, thus letting the water flow into the Mediterranean from the Atlantic Ocean.