xxxxxAs we have seen (1862), whilst the Union forces met with success in the West - sealed by the Battle of Vicksburg in July 1863 -, in the East the Confederate army won a series of victories in the opening phases of the war. Following their triumph at the Battle of Chancellorsville in April 1863, General Robert E. Lee decided to invade the north once again, hoping to reach Philadelphia - or even Washington - and force the Union to sue for peace. He took his army into Pennsylvania, but at the small market town of Gettysburg he was confronted by a large Union force under the command of General George Meade. The three day battle which followed ended in defeat for the Confederation. On the fist day Union troops managed to seize control of Cemetery Hill, south of the town, and this high ground gave them a strategic advantage. Over the next two days Lee mounted a series of attacks on both flanks of the Federal positions, but proved unable to break through the enemy’s lines. Finally, a full scale frontal attack by 15,000 infantry (“Pickett’s Charge”) was brutally repulsed by accurate artillery and rifle fire, and Lee was forced to lead his army back to Virginia. The Battle of Gettysburg, together with the Battle of Vicksburg in the west, proved a turning point in the conflict. By 1864 the Union’s advantages, such as industrial superiority and greater manpower, began to tell. Lee was pinned down in Virginia by troops under the command of General Ulysses Grant, whilst in the west the Battle of Chatanooga and, later, Nashville, forced the Confederates out of Tennessee. At the same time, General William Sherman, having captured Atlanta in September 1864, made his famous “March to the Sea” through Georgia. As we shall see, in April 1865 General Lee formally surrendered at a ceremony in the courthouse of the Virginian village of Appomattox. The civil war was over, but its cruel consequences were about to begin. 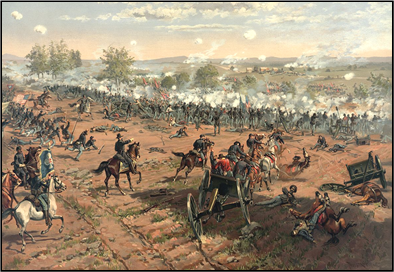 xxxxxAs we have seen, during the opening years of the American Civil War, Union forces in the West proved highly successful under the leadership of General Ulysses Grant. By June 1862 they had seized Memphis, Corinth and New Orleans, and their victory at Vicksburg the following month meant that the Confederation had been split down the middle, north to south. The two sides were never to be reunited.

xxxxxHowever, in the East the Confederate army won the opening battles at Bull Run and, despite their failure to capture the Union capital of Washington, gained a major victory at the Battle of Fredericksburg in December 1862, just before the onset of winter. When fighting was resumed in April 1863 they gained a further victory at the Battle of Chancellorsville, Virginia, and decided to take the battle into the enemy’s heartland. Aiming to penetrate as far as Philadelphia - or even Washington - and force the Unionists to sue for peace, General Robert E. Lee crossed the Potomac with an army of 72,000 men, advanced through Maryland, and entered Pennsylvania. There, however, near the market town of Gettysburg, he ran into the Union Army of the Potomac, under the command of the newly appointed General George Gordon Meade (1815-1872). The run of Confederate successes was about to come to an end. 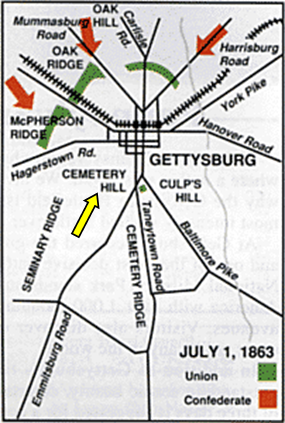 xxxxxThe battle raged over the first three days of July 1863 and proved the longest and bloodiest encounter of the civil war. On the first day, the fighting was centred around the outskirts of Gettysburg with both sides manoeuvring to gain a favourable position.  Early on, Union cavalry and infantry occupied Herr Ridge and McPherson Ridge, low rangese to the north-west of the town, but two Confederate corps overran their positions and forced them southwards. They beat a hasty and, in some cases, disorderly retreat through the streets of the town.  A large number of men were killed in the hand-to-hand fighting and about 500 were captured. In the late afternoon, however, the Union forces regrouped and took up a commanding position on Cemetery Hill, overlooking Gettysburg from the south (arrowed on map). This worried Lee. This high ground was easily defended, provided a good platform for artillery, and straddled the three major roads converging from the south. He ordered one of his commanders, General Richard Ewell, to take the Cemetery Hill “if practicable”, but Ewell decided that an attack would be too risky. If he had made the attempt and it had proved successful, the course of the battle might well have been very different. As it was, Lee was obliged to deploy his Army of Northern Virginia along Seminary Ridge - a stretch of high ground running parallel to the Union’s positions - and then in a semicircular line running through the town and along Hanover Road to a point opposite Culp’s Hill. 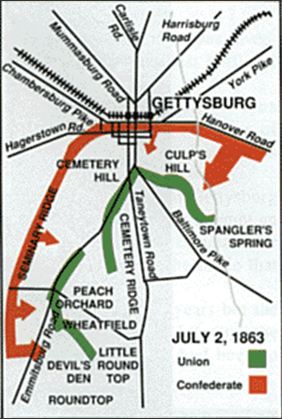 xxxxxBy the next day both armies were up to their full strength. Lee opened the fighting by launching a series of attacks upon both flanks of the Federal line. On the left flank there was fierce fighting around a series of strategic points. Peach Orchard was captured and held for a time, but the Confederate forces failed to take Devil’s Den and were driven back in a ferocious battle for Little Round Top, a rocky hill at the southern end of Cemetery Ridge. The general failure of the Confederate forces was due in part to a lack of coordination on the part of the field commanders. This gave time for the Union forces to be reinforced by some 20,000 men. Towards the end of the encounter, the Southerners were being outflanked by elements of the Union army and were forced to retire, suffering heavy losses in the process. On the Union right a number of attacks were mounted on Cemetery Hill and Culp’s Hill, but despite many casualties the defenders held their lines. At one time Confederate troops did reach the crest of Cemetery Ridge, but were then thrown back by a desperate counter attack. 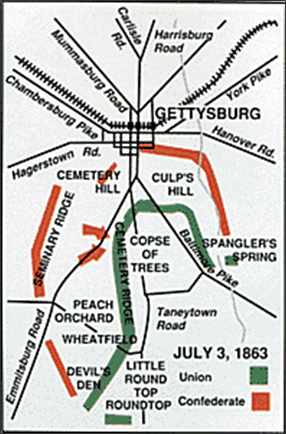 xxxxxThe third day opened with seven hours of fierce fighting around Culp’s Hill. The Confederates were again unable to break through the Union lines, but in the afternoon Lee, confident that one further push would win the day, ordered a massed infantry assault upon Cemetery Ridge. Following a prolonged artillery pounding of the Union’s position - much of which, however, overshot the designated target - a force of some 15,000 infantry, led by General George Pickett, advanced slowly towards the ridge. Having reached open ground it was met by a sustained burst of deadly accurate artillery and rifle fire. Some men managed to reach the enemy’s lines and died in close quarter combat, but nearly half were left dead or wounded on the battlefield, and the rest were forced to retreat. “Pickett’s Charge”, as it came to be known, was the defining moment in the Battle Gettysburg. With ammunition running low and ever mounting casualties, Lee saw caution as the better part of valour, and led the remnants of his army slowly back to Virginia in driving rain. The flooded Potomac held up the retreat for several days, but the survivors eventually crossed the river, assisted by a rear-guard action at  Falling Waters on the 14th July.

xxxxxThe Battle of Gettysburg, together - it must be added - with the Battle of Vicksburg in the west, proved a turning point in the conflict. The Confederates suffered some 28,000 casualties, 5,000 more than the Unionists, and the war might well have ended soon afterwards had Meade followed up his victory with a rigorous pursuit of Lee’s retreating forces, particularly as the Confederates were trapped on the north bank of the Potomac for a number of days. The Union general did send forces in pursuit, but it was a half-hearted attempt and it came far too late. Lincoln was angry at the loss of this “golden opportunity”, and now turned his attention to the war in the West.

xxxxxNonetheless, after Gettysburg and Vicksburg (fought in the same week) the Confederacy was forced more and more on the defensive. Itxdid manage to win a number of battles (such as the Battle of Chickamauga in September 1863), but its hopes of winning an outright victory became more and more unlikely. By 1864 the advantages held by the Union, such as its supremacy in industrial output, manpower, and means of transport, were beginning to tell. Strategically, this allowed Grant to get the better of Lee in a series of bloody battles in Virginia in the summer of 1864, fought mainly in Shenandoah Valley. The Confederates won a number of engagements, but could ill-afford the heavy casualties they suffered. 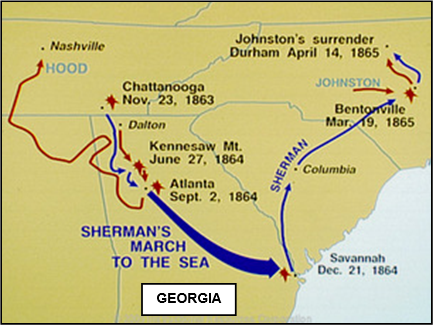 xxxxxMeanwhilexin the West, starting with the Union victory at the Battle of Chattanooga in November 1863, and finishing with the Battle of Nashville in December 1864, the Confederates were forced out of Tennessee. In the meantime, General William T. Sherman (1820-1891) (illustrated), leading an army of 62,000, had captured the city of Atlanta in the September and had begun his famous “March to the Sea”, laying waste parts of Georgia as he did so, and reaching Savannah unopposed in the December.

xxxxxBy 1865, Lee had been forced to retreat to Richmond, his capital in Virginia, whilst in the west the Confederacy had virtually collapsed, hastened by the Union’s decision to grant freedom to the slaves of the Deep South. As we shall see, formal surrender came in April 1865, signed in the McLean House at Appomattox Courthouse between the Confederate commander Robert E. Lee and the Union commander Ulysses S. Grant. The civil war was over, but its cruel consequences were about to begin.

xxxxxIncidentally, the civil war was also fought, albeit on a small scale, west of the Mississippi River. There, Confederate troops attempted to take over Arizona and New Mexico, but were driven out in 1862. Texas was in Confederate hands throughout the war, but could play little part in the conflict after the Union gained control of the Mississippi following the Battle of Vicksburg in July 1863. ……

xxxxx…… Thexsong Marching Thru’ Georgia was composed by the American songwriter Henry Clay Work (1832-1884) the year after Sherman made his historic “March to the Sea” in 1864. It became very popular among Union veterans after the war and, like the Australian folk song Waltzing Matilda, became a famous marching song during the Second World War (1939-1945). Another of his big hits was My Grandfather’s Clock, published in 1876. ……

xxxxx…… Itxwas during the Civil War, in November 1864, that about 800 Union soldiers, mostly irregulars, went on the rampage and destroyed a friendly village of Cheyenne and Arapaho at Sand Creek in Kiowa County, Colorado. Some 200 Indians were killed, nearly all children and elderly men and women. An official enquiry condemned the Massacre at Sand Creek, but no one was arrested, and the memorial at Colorado Capitol lists the event as one of the Union’s great victories. 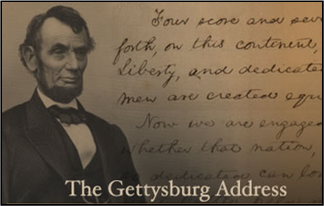 xxxxxIt was in November 1863 that President Abraham Lincoln gave his now famous Gettysburg Address at a ceremony held to dedicate the battlefield as a military cemetery. Thexmain speaker for this occasion, the celebrated politician Edward Everett of Massachusetts - a man renowned for his powers of oratory - spoke for two hours. Lincoln’s speech lasted a bare two minutes! Beginning with the well-known words “Fourscore and seven years ago”, its ten sentences paid tribute to the sacrifice made by the fallen, and called upon the living to ensure that the freedom, equality and democracy for which they had died “shall not perish from the earth”.

xxxxxAt the time of the ceremony, Lincoln’s few, brief words were received without applause and left many of the 15,000 audience totally unimpressed, but over the years this carefully crafted address, delivered with feeling and compact in thought, has become the most celebrated speech in the history of the United States. And in addition, it has proved an inspiration to people across the world who have attained or seek to attain a government “of the people, by the people and for the people”. 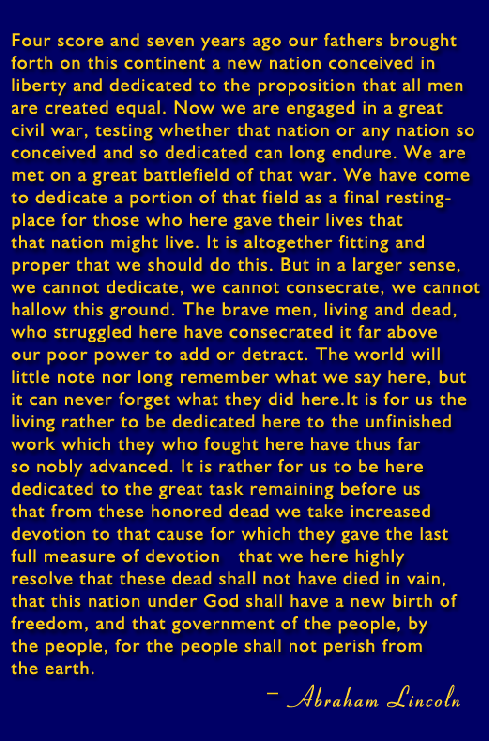