xxxxxThe King George's War in North America, starting in 1744, was simply an intensification of the border conflict which had been raging between the British, French and Spanish colonists for decades. In 1733 the British had strengthened the southern border of their territory by the establishment of Georgia, and this had kept the Spanish at bay in the south. In the north, however, fighting continued along the borders and further inland. Here the major event of the war was the British capture of the French fortress of Louisbourg, taken against all the odds in June 1745. Short of funds, an uneasy peace was finally reached by the Treaty of Aix-la-Chapelle, the settlement which brought an end to the War of the Austrian Succession in 1748.

xxxxxIn North America, the so-called King George's War only served to highlight the bloody conflict which continued to rage between the three colonial powers, Britain, Spain and France, each with the aid of their Indian allies. Here, as we have seen earlier, the British had attempted to strengthen the southern border of their colonial possessions by the establishment of the colony of Georgia in 1733. This did succeed in keeping the Spanish at bay - then occupying Florida - but further north the border fighting with the French continued unabated. 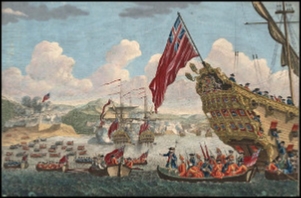 xxxxxDuring King George's War, begun in 1744, conflict intensified, especially along the frontiers of Acadia and New England, and the struggle for control of the interior, notably the Ohio Valley, also became fiercer. As in the past, many of these short, sharp battles proved inconclusive, but in June 1745 a force of 4,000 New England militiamen did manage to overrun Cape Breton Island (then called Isle Royale) and, with the aid of a British fleet, capture the French fortress of Louisbourg (illustrated). Commanding the entrance to the mouth of the St. Lawrence River, and regarded as impregnable, its capture was a morale boost of some importance. The French made two attempts to recapture the fort but without success. 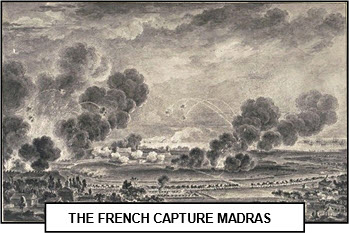 xxxxxIn the meantime, however, the British forces in India had no cause to rejoice. Here the French, under the command of their governor general Joseph François Dupleix, gained the upper-hand. They captured Madras in September 1746, much to the alarm of the British, and succeeded in repelling a number of attacks upon Pondicherry, their administrative centre. But in India, as in North America, hostility was severely restricted by lack of funds. In these far-flung corners of empire, none of the mother countries was willing, or, indeed, able to finance war on a large scale. Thus by 1748 all sides were willing to take part in the Treaty of Aix-la-Chapelle, the peace settlement called to bring an end to the War of the Austrian Succession.

xxxxxIncidentally, the conflict which broke out in India in 1746 - together with two further outbreaks beginning in 1749 and 1757 - are sometimes known as the Carnatic Wars - so named because, for the most part, the fighting took place within the Carnatic Region, a strip of land along the east coast of southern India.