xxxxxThe burlesque The Beggar's Opera of 1728, one of the finest pieces of social and political satire, was immensely successful and brought fame and fortune to the English poet and dramatist John Gay. Written in the form of a ballad opera, the story of Polly's love for the dashing highwayman Captain Macheath is told by dialogue interspersed with popular aires and folk songs. It delighted its audiences by its witty humour, daring satire, and catchy old airs - put together by the German composer John Pepusch. But not everyone shared the public's enthusiasm. The opera's plot, centred around the seedy side of London's low life, was a means of satirising the morals of the upper classes and the Whig administration, led by Robert Walpole. Hardly surprising that Polly, a sequel planned by Gay, was banned! As an accomplished playwright and composer of light verse, Gay was a founder member of the Scriblerus Club, and thus close friends with the Augustan "wits", Jonathan Swift, Alexander Pope, John Arbuthnot and Thomas Parnell. His other works included Trivia, written in the style of Vergil's Georgics, and two brilliant collections of fables. He also collaborated with Pope and Arbuthnot in the writing of the play Three Hours After Marriage. On the music front, he wrote ballads, and put lyrics to a number of songs. He died a wealthy man and was buried in Westminster Abbey. 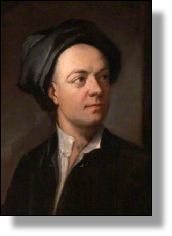 xxxxxThe Beggar's Opera of 1728, a dramatic burlesque by the English poet and playwright John Gay, was an instant and phenomenal success. Itxran for 62 performances, a record for those times, and delighted its audiences by its good humour, light hearted wit, hard-hitting satire, and loads of easy-to-sing songs and folk tunes - put together by the German-born composer John Pepusch (1667-1752). Known as a "Newgate pastoral", (Newgate was a London prison at this time), it told of Polly's love for the dashing highwayman Captain Macheath in the form of a ballad opera in which the story is told by dialogue, interspersed with popular aires and folk songs.

xxxxxBut this unprecedented success was not to everyone's liking. The plot itself - which might well have been suggested by Gay's cynical friend Jonathan Swift - revolved around the low life of London's thieves and prostitutes, and was a veiled but obvious satire upon the vice and hypocrisy of the city's upper c 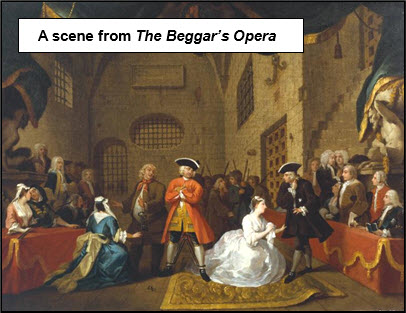 lasses in general, and the Whig administration in particular. Indeed, certain stage characters - including two based on the notorious criminals of the day Jonathan Wild and Jack Sheppard - clearly represented members within the government, none more so than the chief minister, Sir Robert Walpole. It is perhaps not surprising, therefore, that Gay's sequel to his masterpiece, Polly, due to open the following year, was banned by the Lord Chamberlain! This action, however, only served to whet the public's appetite, and the demand for printed copies of the operetta was enormous. It is estimated that Gay made a profit of £1,000 from this sale alone!

xxxxxGay was born in Barnstaple, Devon, England, and attended the local grammar school before working for a short time as a silk merchant's apprentice. In 1708 he published his first burlesque Wine and this started him on his literary carer. His first poem, Rural Sports, was written in 1713, and by that time he had became friendly with Alexander Pope, and the producers of the Spectator, Richard Steele and Joseph Addison. Together with Pope, Swift, John Arbuthnot and Thomas Parnell, the "wits" of the Augustan age in English literature, he was a founder member of the Scriblerus Club, and contributed to the club's Memoirs of Martin Scriblerus, aimed at ridiculing inferior poetry and pedantry. 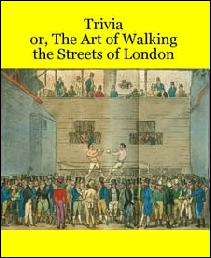 xxxxxGay is remembered above all for The Beggar's Opera - a welcome relief from the florid “Italian” opera then in vogue - but he produced a number of other works. Amongst these were The Shepherd's Week, a collection of mock classical poems, written in 1714, and, two years later, Trivia - or the Art of Walking the Streets of London. The latter, regarded by many as his finest poetic work, described the city scene in much the same way as Vergil described the countryside in his Georgics. He also carried on the tradition of the fable, and in this format excelled in the making of sparkling and witty lines. His Tales in Verse, published in 1727 and 1738, make up the best collection of Fables in English literature. In 1717 he collaborated with Pope and Arbuthnot in the writing of the stage comedy Three Hours After Marriage, and on the musical front he composed lyrics to many songs, and wrote a number of ballads, including Sweet William's Farewell to Black-eyed Susan.

xxxxxThe Beggar's Opera, one of the most successful satires of all time, has secured for Gay a firm place in the history of English literature. A witty and able man, he was one of the leading poets and playwrights in England at this time. He made a fortune out of his literary efforts and, so we are told, lost much of it as a victim of the catastrophic South Sea Bubble. Nonetheless he died a very rich man. He was buried in Westminster Abbey, next to the great poet, Geoffrey Chaucer, where his epitaph, written by Pope, reads:

Life is a jest, and all things show it,

I thought so once, and now I know it.

xxxxxIncidentally, the social satire, The Beggar’s Opera, was the inspiration for The Threepenny Opera, (a dig at capitalism), produced exactly two hundred years later in 1928 by the German playwright Bertolt Brecht and the German- American composer Kurt Weill. It was first made into a film in 1931. ......

xxxxx...... Thexfamous London theatre Covent Garden was opened in 1732 and The Beggars Opera was the first opera to be performed there. Officially named the Royal Italian Opera House, it has indeed become famous for its operatic productions.