xxxxxThe American engineer Robert Fulton invented his submarine Nautilus in 1801. It was a marked improvement on The Turtle, David Bushnell’s submersible of 1775, but it was seen as an “inhuman” weapon and no country was interested. He then experimented with a steamboat on the Seine in Paris and, on returning to New York, launched his Clermont (as it came to be called) on the River Hudson in 1807. At a speed of nearly 5 mph, it proved a great success, and was soon plying a regular passenger service from New York City to Albany. He went on to make steamboats for the rivers Mississippi and Potomac, and a number of city ferries. His last vessel was the Fulton (or the Demologos), the world’s first steam warship. It was built to defend New York against the British, but it never saw active service. Fulton’s inventions gave the impetus to steam navigation, but he was not the first to invent the steamboat. That honour goes to the French nobleman the Marquis de Jouffroy d'Abbans. In 1783 his steamboat, the Pyroscaphe, travelled for 15 minutes on the River Saone at Lyons before breaking up. And the American John Fitch launched a steamboat on the Delaware River in 1786 and, four years later, established the world’s first steamboat service from Philadelphia to Burlington. But the enterprise was not a commercial success, and did not attract the publicity later enjoyed by Fulton’s undertaking in New York. 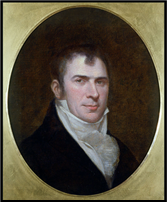 xxxxxAs we have seen, the American inventor Robert Fulton was the engineer who built the first practical submarine. Constructed in 1801, the Nautilus was a marked improvement upon The Turtle, the submersible constructed by the American inventor David Bushnell in 1775 and used unsuccessfully in the American War of Independence. However, no government appeared interested in Fulton’s “atrocious and dishonourable” war machine, and he therefore renewed his efforts on designing and building a steamship. In 1803 he carried out trials on the River Seine in Paris and then, returning to America, produced one of the world’s first successful steamships. Named the Steamboat, and, subsequently, the Clermont, it was launched on the Hudson River in 1807 and, proving commercially viable, was soon sailing between New York and Albany - some 150 miles - on a regular basis.

xxxxxFulton was born in Pennsylvania and started his working life as a portrait painter in Philadelphia, specialising in miniature portraits, painted on ivory for lockets and rings. To further his art studies he journeyed to England in 1787 to work with the American painter Benjamin West. Here, however, he became interested in the technical innovations of the Industrial Revolution, and within a few years had turned his attention to civil engineering. It was at this time that he designed a device for hauling canal boats from one level to another, devised machines for producing rope and sawing through marble, and constructed a mechanical dredger for making canals. His book A Treatise on the Improvement of Canal Navigation was published in 1796, but his ideas were not widely adopted. 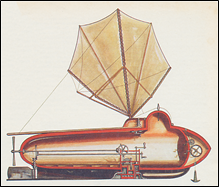 xxxxxHe went to France in 1796, and during the next five years spent much time on developing the Nautilus, assisted by a grant from Napoleon. Constructed of metal in the shape of a fish - to reduce water resistance - it was driven by a hand operated screw propeller, and was manoeuvred by means of horizontal rudders - the modern “diving planes”. Some 24 feet in length, it could accommodate a crew of three, go to a depth of 25ft, and by using tanks filled with compressed air, was able to stay submerged for five hours or more. Ballast tanks were used to lower and raise the vessel, and a mast and sail, folded flat on the deck, were erected when travelling on the surface. Its warhead was a mine which, dragged on a long line, was designed to explode when it made contact with the hull of an enemy ship. Although the Nautilus showed promise, Fulton could drum up no support for the project - seen by many as “inhuman” - and he abandoned the scheme in 1806. As we shall see, however, the submarine was to play a part in the American Civil War some sixty years later, and, in the long term, was to prove one of the most deadly weapons in the history of naval warfare. 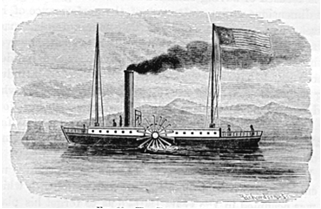 xxxxxFinding no takers for his submersible, Fulton returned to his earlier project, fitting steam engines to ships. Contracted to make a steamboat to operate on the Hudson river, in 1803 he carried out some successful trials on the River Seine in Paris - though the speed of the vessel was little more than walking pace - and then returned to New York in 1807. Here the Clermont (as it was eventually called) was built by a local boatyard. About 135ft in length and 16ft wide, it was propelled by two paddle wheels and driven by a wood-burning steam engine made by the English engineering firm Boulton & Watt. It was completed by August, and then made its maiden voyage up the Hudson River from New York City to Albany, covering a distance of 150 miles in just 32 hours - an average speed of about 4.7 mph. Though little more than a flat-bottomed box with a draft of 7 ft, it had made steam navigation commercially viable. By sail, such a journey would have taken about four days. Fulton was granted a patent and a profitable passenger service was put into operation. The Steamboat - as it was originally called - had arrived.

xxxxxFollowing this success, Fulton designed steamboats for other rivers, such as the Potomac and Mississippi, and ferryboats for river crossings in the cities of New York, Boston and Philadelphia. In October 1814 he completed the first steam warship, fittingly named the Fulton but sometimes called the Demologos. A veritable floating gun platform, it was designed to protect New York Harbour against the British, but peace came in the December so it never saw action.

xxxxxFulton’s Clermont was the first steamboat to gain a large measure of commercial success, thereby ushering in the age of steam navigation, but it was by no means the first steamboat. As early as 1776 the French nobleman the Marquis de Jouffroy d'Abbans, had fitted an engine manufactured by James Watt into a small paddle steamer some 42ft long. This proved a failure, but, as we have seen, in a second attempt in 1783, his Pyroscaphe, propelled by two paddle wheels on the River Saone at Lyons, travelled for fifteen minutes before the pounding of the engine caused it to break up. 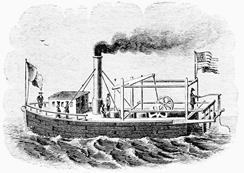 xxxxxAndxone of the earliest recorded uses of steam power afloat was in 1786, achieved by the American inventor John Fitch (1743-1798). He launched a steamboat on the Delaware River, and his second boat, competed two years later, reached a speed of 6 mph while making a number of journeys as far as Burlington, some 20 miles beyond Philadelphia. In 1790 he established the world’s first steamboat passenger and freight service, operating between Philadelphia and Burlington, New Jersey, but the loss of a new steamboat in a storm discouraged investment and, after failing to interest the French government in steam navigation, he returned home a broken man. 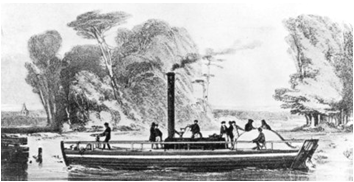 xxxxxInxEurope, the Scottish engineer William Symington (1763-1831), having invented the crank and connecting rod to rotate a paddle wheel, constructed a steam tug for Lord Dundas, a governor of the Forth and Clyde Canal. Named the Charlotte Dundas (illustrated), after his wife, it was tried out in March 1803 and proved highly successful in pulling two heavily-laden barges nearly 20 miles along the canal in the space of six hours. However it was banned because of the damage it might do to the canal banks. Andxin the same year the American John Stevens (1749-1838) of New York designed and built the Polacca, the first steamboat to use a screw propeller. Then in 1807, together with his son, Robert, he built the paddle steamer Phoenix to operate on the Delaware River. To reach its destination the Phoenix sailed from New York to Philadelphia along the coast of New Jersey, thereby becoming the first steam boat to venture out into the open sea.

xxxxxInxthese early days, however, steamboats were confined to inland and coastal waters. For example, the Scottish engineer Henry Bell (1767-1830) launched his own steamship, the Comet, from Port Glasgow in 1812, but this was only used to carry passengers and cargo along the Clyde River. It was not until 1819 that the USS Savannah, a converted coastal vessel, became the first steamship to cross the Atlantic, making the journey from Savannah, Georgia to Liverpool, England in 26 days - though it made much more use of its sails than its steam engine! The following year the first iron ship made the crossing in 22 days. But, as we shall see, it was to be the English engineer Isambard Kingdom Brunel who took steam navigation a big step forward with his Great Western, completed in 1837 (Va). Three years after its maiden voyage, a regular service was in operation across the Atlantic, and by the middle of the 19th century steamships, many of them made of iron, were replacing wooden sailing vessels.

xxxxxIncidentally, while Fulton was in England, working on plans for a steamship, he was helped by Edmund Cartwright. He was the English engineer who invented a wool combing machine in 1789 and later devised a steam engine fuelled by alcohol. ……

xxxxx…… We owe the word “torpedo” to Fulton. Having made an underwater contact mine - the weapon used by the Nautilus - he likened it to the electric ray fish, a sea creature which stuns and weakens its victim by giving it a hefty electric shock. This particular fish is from the family known as torpedinidae, and this term gave the explosive charge its name. The torpedo proved a deadly weapon in naval warfare, especially after it was much improved in the hands of the English engineer Robert Whitehead in 1866. …….

xxxxx…… Fulton’s Nautilus - named after a primitive deep-water mollusc - was the first of a long line of submarines given this title. Perhaps its most famous “descendent” was the American navy’s Nautilus of 1954, the first nuclear-powered submarine. This name was also given to the fictitious submarine in the adventure story Twenty Thousand Leagues under the Sea, published in 1870 by the French science-fiction writer Jules Verne. ……

Xxxxx…… Thexfirst submarine in the modern sense of the word was the Gymnote, a cigar-shaped vessel built of steel and driven by an electric motor. Designed by the French naval architect Henri Dupuy de Lôme (1816-1885) - responsible earlier for the building of La Gloire, the first ironclad battleship - it was completed by his colleagues Gustave Zédé (1825-1891) and Arthur Krebs (1850-1935), and launched in 1888. With a crew of five, it had a range of 125 miles, a speed of six knots when submerged, two torpedoes fitted in external racks, and one of the first periscopes. It aroused much interest among naval experts, particularly in the United States.