xxxxxFrederick II succeeded his father, Frederick William, in 1740 and, as we have seen, plunged his country into the War of the Austrian Succession. His successful retention of the wealthy province of Silesia, however, led to the Seven Years' War in which the Austrian leader, Maria Theresa, had assembled a powerful alliance, including France, to thwart Prussia's territorial ambitions. Opening the war with a surprise attack upon Saxony, Frederick's skill as a military commander brought a series of victories against the French, Austrians and Russians, but by 1759 the strength of the opposition began to tell, and all seemed lost. However, in 1761 the new Russian leader, Peter III, withdrew his forces from the war, and the British, his only ally, began to hold the French in check. Austria then became isolated and agreed to come to terms. By the Treaty of Paris in 1763 (G3a) Prussia retained the coveted province of Silesia, and emerged as one of Europe’s most powerful nations. Later, in 1772 (G3a), as we shall see, Frederick went on to acquire western Prussia in the First Partition of Poland, and, in 1785, to form the League of German Princes, the first attempt by Prussia to assert its leadership over Germany. In domestic politics, he proved, indeed, the prototype of the "Enlightened Despot". As the "first servant" of the state, he introduced improvements in the law, education and agriculture, and encouraged manufacturing industry. And he made some limited progress towards the right of the individual in such matters as free speech and religious toleration. A man of culture himself, he patronized the arts and sciences throughout his life. At his death, he left an efficient, well-organized state, a firm foundation upon which Bismarck was to build a powerful German empire. 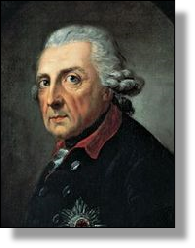 xxxxxAs we have seen, with the death of Emperor Charles VI in 1740, and the succession of his daughter Maria Theresa, a number of states, including Prussia, saw the Habsburg dominions as up for grabs. Frederick II, who had succeeded his father Frederick William earlier that year, lost no time in making the first move in a struggle which came to be known as the War of the Austrian Succession. He invaded Austria, and within less than two years had captured the wealthy province of Silesia, an acquisition which was confirmed by the Treaty of Aix-la-Chapelle which ended the war in 1748. However, he was only too aware that the redoubtable Maria Theresa, having managed to hold on to most of her imperial domains, was determined to recover this province. It was just a matter of time before she made her attempt.

xxxxxThe time came in 1756, with the outbreak of the Seven Years’ War. By then, however, it was not Marie Theresa of Austria who found the odds stacked against her, but Frederick of Prussia. Anticipating the coming conflict, the Austrian leader had reversed her country's traditional policy by making an alliance with France (the so called "Diplomatic Revolution"), and this pact was joined by Russia, Sweden and Saxony, all anxious to thwart Prussia's territorial ambitions. Threatened and isolated - save for the support of Britain and Hanover - Frederick sought defence in attack. He invaded and overrun Saxony in 1756, and advanced into Bohemia the following year. 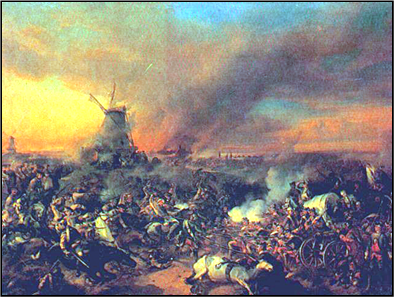 xxxxxIn the first stages of the struggle, the Prussians did well, due in large measure to Frederick's skill as a military commander. They were defeated by the Austrians at the Battle of Kolin, but then went on to gain victories over the French at Rossbach, the Austrians at Leuthen, and the Russians at Zorndorf (illustrated). But by 1759 the tide had begun to turn. Attacked on a number of fronts, Frederick's forces were badly defeated at the Battles of Kay and Kundersdorf, and the following year they were overwhelmed at Landshut. By October 1760, eastern Prussia had been taken, and Russian and imperial troops were in Berlin. But when all seemed lost, victory was snatched from the jaws of defeat. The timely death of the Empress of Russia, Elizabeth Petrovna, brought Peter III to the throne and he, a staunch admirer of the Prussian leader, lost no time in signing a peace agreement. In addition, the British and Hanovarians at last began to make their presence felt on the battlefield, keeping the French in check. By the terms of the Treaty of Paris in 1763 (G3a), Prussia, its possession of Silesia endorsed, emerged as one of Europe's most powerful countries, and Frederick as one of its most successful leaders. 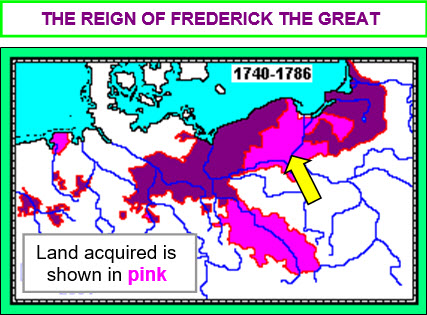 xxxxxIn surviving as a nation, Prussia had paid a high price in both men - some 180,000 - and in the devastation of much of its land. For the remainder of his reign, therefore, Frederick sought, successfully, to keep his realm at peace and restore its economy. Even so his policy of aggrandizement continued unabated. As we shall see, by prior agreement with Russia and Austria, he acquired western Prussia in the infamous First Partition of Poland of 1772 (G3a). This not only added substantially to the nation's size, but also served to join the two parts of Prussia together (arrowed on map). Thenxin 1785, anxious to stop Austria from meddling in German affairs, he took his own step in that direction by forming The League of German Princes - the Furstenbun. It did not survive his death, but it was the first conscious attempt by Prussia to take over the leadership of Germany.

xxxxxNot surprisingly, Frederick also made use of this long period of peace to increase the strength and quality of his army. By the end of his reign, he had doubled its size to 190,000, and created a well-trained, disciplined force which was envied - and feared - by his neighbours. Furthermore, whilst his skill as a military commander was proven and legendary, he also showed remarkable skill as an administrator. The prototype of the "enlightened despot", he saw himself as the "first servant of the state", solely responsible for the well-being of his country and people. As such, he conscientiously involved himself in every aspect of government, and introduced a series of far-reaching reforms. 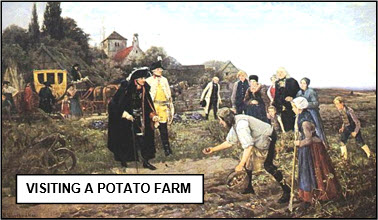 xxxxxIncluded in this progressive programme were improvements in agriculture, such as the introduction of crop rotation and the scientific methods of cattle breeding; the construction of canals and the draining of marshland, notably in the valleys of the Oder and Vistula; and the encouragement of manufacturing industry, like the production of porcelain, silk and tobacco. He also began a system of compulsory education for children of five to fourteen years of age, and, in order to increase the nation's population, welcomed immigrant farmers from all over Europe. And he made, too, a valuable contribution to law reform. In 1747 he issued a new codification of Prussian law, known as the Codex Fridericianus, and this served as a basis for the revised code of 1794.

xxxxxFrederick patronized the arts and sciences all his life, and was himself a cultured man. He was interested in literature, wrote poetry, composed music, played the flute, and was a student of philosophy, history and politics. He corresponded with famous intellectuals of his day and, until they fell out, had Voltaire as a member of his court. He was also a prolific writer and, amongst many works, wrote History of My Time, The Art of War, and Antimachiavel, a work in which he roundly condemned despotic rule. As an "enlightened" despot, he made some limited progress towards the rights of the individual. Torture was abolished save for murder and treason, some freedom of speech was permitted, and all forms of religious opinion were tolerated.

xxxxxThis said, he placed much reliance upon the aristocracy (or Junkers), regarding them as the backbone of the state. As such, they enjoyed a large degree of autonomy within their estates, and it is more than likely that some of Frederick's progressive innovations never reached the lower levels of society. Certainly the serfs remained very much tied to their master's estates. 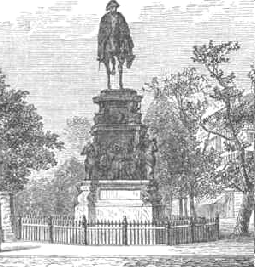 xxxxxBy the standards of the day, Frederick was indeed an enlightened ruler who set new standards by which to measure the value of kingship. Intelligent, energetic, and dedicated to his calling, he won the admiration and the affection of the vast majority of his subjects, and was known by many as "Old Fritz". And by his efforts, he left behind, a nation which had doubled in size and trebled in population; a treasury that was full to over-brimming; an army of considerable strength; and a nation tuned for greatness. His immediate successors did not, could not, measure up to his genius, but even at this early stage, he laid the foundations upon which the Iron Chancellor, Otto von Bismarck, was to build a German empire. He died in August 1786 and, in accordance with his wishes, was buried in a simple grave at his Sans Souci Palace at Potsdam. Illustrated here is the memorial to him on the Boulevard Unter den Linden in Berlin. 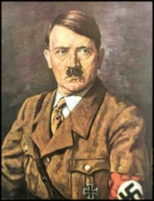 xxxxxIncidentally, Adolf Hitler (illustrated), Germany's leader (fuhrer) in the Second World War, was a great admirer of Frederick the Great. Indeed, in his last weeks, spent in a Berlin bunker in 1945, his propaganda minister, Joseph Goebbels, used to read to him passages from Carlyle's history of his hero. Then, as Soviet troops came ever nearer to Berlin, Hitler had Frederick's body, and that of his father, taken from Potsdam and hidden in a salt mine in Thuringia. After the war both bodies were taken to the Hohenzollern family home near Stuttgart, but in August 1991 the German government removed them and again put them to rest at Sans Souci (French for “carefree”).