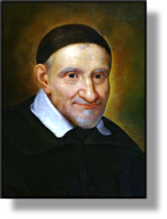 xxxxxIt was in 1622 that Francis of Sales appointed his fellow countryman Vincent de Paul (1581-1660) as superior of the Parisian convents of the Order of the Visitation of Our Lady. Vincent himself went on to help found two charitable orders, The Congregation of the Mission (also known as the Vincentians or the Lazarists) in 1625, and the Daughters of Charity (sometimes called Sisters) in 1634.

xxxxxHe was born of humble origin near Pouy (now called Saint-Vincent de Paul) and was educated by the Franciscans at Dax. After being ordained a Roman Catholic priest in 1600, he graduated from the University of Toulouse in 1604. It would seem that two years later, while journeying from Marseille to Narbonne by sea, he was captured by Barbary pirates and sold into slavery in Tunisia. He managed to escape the following year and, after returning to France via Rome, he became a parish priest in the village of Clichy just north of Paris. Doubtless because of his captivity in Tunisia, it was during this time that he was made chaplain general of the galleys of France and worked to improve the lot of galley slaves. And during the 1620s he founded a number of Confraternities of Charity in and around Paris, organizations in which women from wealthy backgrounds ministered to the needs of the local poor who had fallen sick.

xxxxxIn addition to his duties as a parish priest, he was also chaplain to an aristocratic family, and it was with the aid of this family that in 1625 he founded the Congregation of the Mission. Formed originally to preach the gospel to the peasants on the estate, its work was greatly extended the following year when a community was established at the College des Bons-Enfants in Paris - with Vincent as its first principal. Then in 1632 the order took on the title of Lazarist Fathers when its headquarters were established in Paris at the former priory of Saint Lazare. Apart from the training of young men for the priesthood and general relief work during the French religious wars, the movement founded a number of charitable organizations, including the Daughters of Charity in 1634, a group which sent its sisters outside the convent to minister to the poor, and which was later instrumental in the establishment of the Paris foundling hospital. Vincent de Paul was made a saint in 1737, and from 1855 has been the patron of charitable works.

xxxxxIn 1622 Francis of Sales put his fellow countryman Vincent de Paul (1581-1660) in charge of the Parisian convents of the Order of the Visitation of Our Lady. Vincent went on to found two charitable orders. In 1625 he established The Congregation of the Mission (also known as the Lazarists) to train men for the priesthood and provide relief work during the French religious wars. Then in 1634 this organisation set up the Daughters of Charity (sometimes called Sisters).This group sent its members outside the convent to minister to the poor and, later, was instrumental in the establishment of the foundling hospital in Paris. As a young man Vincent was captured by Barbary pirates and sold into slavery in Tunisia. He managed to escape and, becoming a priest near Paris, was made chaplain general of the galleys of France, working to improve the lot of galley slaves. Since 1855 he has been regarded as the patron of charitable works.

xxxxxThe French Roman Catholic priest Francis de Sales was sent to Chablais, Savoy, in 1594 and, by his pious example and religious reforms, brought the majority of the local Calvinists back to Roman Catholicism. He was made bishop of Geneva in 1602 and, working from Annecy, helped found the Order of the Visitation of Our Lady in 1610. This order of nuns adopted a cloistered life and devoted most of its time to the religious education of women. When he died in 1622 it had 13 monasteries, and this number had risen to nearly 200 by the end of the 18th century. In his major work, Introduction to a Devout Life, written in 1608, he argued that the devout Christian had an important role to play as part of everyday society.

xxxxxThe French Roman Catholic bishop and writer Francis de Sales was born of a noble family in Thorens-Glieres. He was educated at the Jesuit College of Clermont in Paris before studying law at Padua University. After a short time practising law, he was ordained in 1593 and the following year was sent to Chablais, a strongly Calvinistic area in Savoy. Here, by his pious example and a series of reforms based on the dictates of the Counter Reformation, he brought the bulk of the Calvinists back to Roman Catholicism.

xxxxxIn 1602 he was appointed bishop of Geneva and settled at Annecy, the chief town of the Dukedom of Savoy. It was here that the bishop's seat had been re-allocated during the height of the Reformation. And it was from here that he helped found the Order of the Visitation of Our Lady, led by Jane Frances de Chantal (here illustrated). This order, established in 1610, and often referred to as the Order of Visitation Nuns, was originally intended to visit and care for the local poor and sick, but within a few years it adopted a cloistered life and devoted most of its time to 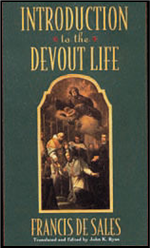 the religious education of women. When Francis de Sales died in 1622 the movement had thirteen monasteries; twenty years later there were 85, and the number reached close to 200 by the end of the eighteenth century.

xxxxxHe was made a saint in 1665 and, since 1923, has been regarded as the patron saint of journalists and writers in general. Apart from his sermons and letters, he is remembered today for his major work, Introduction to a Devout Life, written in 1608. In this he argues that the committed Christian had an important part to play in worldly society, and need not necessarily withdraw into monastic life.