xxxxxEmperor Yung Lo moved into his Forbidden City in 1421. Containing a vast group of imperial buildings in the heart of Peking, work on its construction was begun in 1406. Surrounded by a wall two-and-a-half miles long and over 30 feet high, it was closed (“forbidden”) to commoners and foreigners during the days of the Empire. It once contained some 9,000 rooms, and housed the entire imperial court. The importance of each building was shown by its dimensions, the quality of its wood and carvings, and the colour and type of the roof. Particularly important and magnificent among the palaces, halls and shrines were the Hall of Supreme Harmony - the largest wooden building in China -, The Throne of Heaven, and the Hall of Prayer for Good Harvests. Entrance to the city was via the Gate of Heavenly Peace on one side of the vast Tien-an Men square.

xxxxxWalls, over 30ft in height and extending two and a half miles, enclose The Forbidden City, a group of imperial buildings within Peking’s Inner City, built between 1406 and 1420. These buildings, which included palaces, halls and shrines, were used by the Chinese emperors from 1421 - beginning with Emperor Yung Lo - until China became a republic in 1911. At one time there were no less than 9,000 rooms, used to house the entire imperial court, and the servants, mostly eunuchs, numbered 10,000. 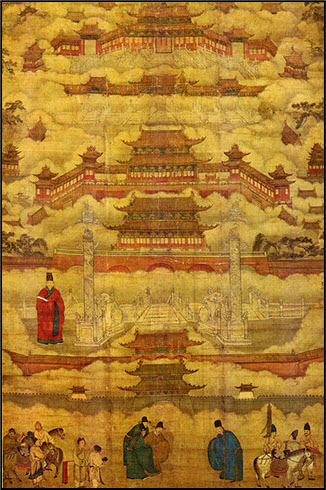 xxxxxUnlike private houses, where layout was generally informal, the halls and courtyards in the Forbidden City were arranged one behind each other along a line going from south to north, this line marking the authority of the ruling dynasty. Thus the importance of a building, be it for ceremonial or religious purposes, was clearly defined by its position, layout, size and style of decoration. For example, the exact dimensions of a particular courtyard surrounding a hall or temple, the height and width of the walls, the amount and thickness of the timber used, and the type of roof construction (together with the colour of its tiles and the quality and number of its carved figures), all testified to the building’s importance within the life of the court.

xxxxxOf the many buildings in this huge compound three are outstanding. Towards the centre was built the Emperor’s throne room, known as the Hall of Supreme Harmony, the largest wooden building in China (illustrated left below). Also built along the south-north axis was the Throne of Heaven (illustrated centre below), and The Hall of Prayer for Good Harvests (illustrated right below), its structure symbolising the four seasons, the twelve months, and the twelve hours of the day. Its present circular form was added in the sixteenth century. These, like many of the other buildings, have been modified and renovated over the years; all three are magnificent examples of Chinese architecture.

xxxxxThe Forbidden City was so-called because, during the time of the Emperors, no commoner or foreigner was allowed entrance without special permission from a court official. Since 1949, when the People's Republic of China was formed, the palaces have been converted into museums and opened to the public. All the major buildings can be seen. Entrance to the city was via the Gate of Heavenly Peace on one side of the vast Tien-an Men square.

xxxxxIncidentally, it was in Tien-an Men square in 1989 that Chinese troops massacred one thousand students and civilians (the number reported at the time) during a peaceful demonstration demanding greater freedom and the introduction of democratic government.