WAR OF THE AUSTRIAN SUCCESSION

xxxxxMaria Theresa had no shortage of enemies when she succeeded her father, Emperor Charles VI, in 1740. She lost Silesia to Prussia early on, but managed to fight off attacks from the French and Bavarians. Furthermore, as we saw in 1743, her allies, the British and Hanovarians, had won a notable victory over the French at the Battle of Dettingen. By this time, however, Prussia had re-entered the war and, under its leader Frederick II, had forced Austria onto the defensive again. Then in 1745 a large French army, having blocked the advance of an allied force at Fontenoy, a few miles outside Tournai, made good use of its superior numbers. The allied commander, the Duke of Cumberland, ordered a direct frontal assault, first by his Dutch troops, and then by his British and Hanovarian infantry, but they made no headway. It was then that Marshal Saxe launched his Irish Brigade. They broke through the allied lines and caused a general retreat. Following this victory, within a year the French had conquered the Austrian Netherlands. The last years of the war also saw attacks upon Austrian possessions in Italy - the Spanish captured Milan in 1745 -, and, as we have seen (1744), there was a flare up of fighting between Britain and France in both North America and India. By 1746, however, all countries were war-weary, and anxious to reach a settlement. This they did at the Treaty of Aix-la-Chapelle in 1748.

xxxxxThe War of the Austrian Succession which broke out in 1740, following the death of the Emperor, Charles VI, had initially gone badly for his successor, his daughter Maria Theresa. Prussia had seized Silesia, and a Franco-Bavarian force had invaded northern Austria and overrun much of Bohemia. In 1742, however, Maria Theresa went on the offensive, regaining her lost territory, and the following year, as we have seen (1743), a combined force under George II defeated the French at the Battle of Dettingen. 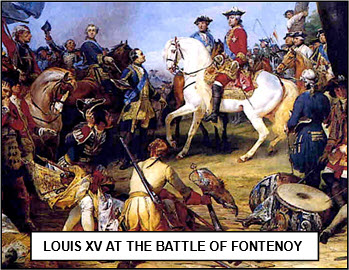 xxxxxButxthe following year, Prussia re-entered the conflict - the Second Silesian War - and the Austrians were soon forced onto the defensive again. Then in May 1745 the French, this time under the command of their brilliant soldier Marshal Maurice de Saxe (1696-1750), took revenge for his country's defeat at Dettingen. An allied army of about 50,000 British, Dutch and Hanoverian troops was making for Tournai, then under siege, when at the village of Fontenoy, just five miles short of their destination, it found its way blocked by a French force of some 70,000 men. The allied commander, the Duke of Cumberland, chose to attack, but an assault by the Dutch ended in failure, and an advance by his British and Hanoverian infantry reached the French lines, but then made little headway. It was at this point that Marshal Saxe launched a sudden 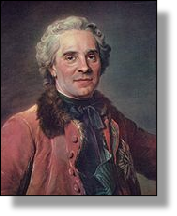 attack by his Irish Brigade, and this broke through his enemies' defences. The allies were able to retreat in good order, but the battle was lost. InxDecember, by the Peace of Dresden, Maria Theresa was obliged to cede Silesia to the Prussians, bringing an end to the Second Silesian War. Thexfollowing year Marshal Saxe (illustrated) completed his conquest of the Austrian Netherlands by defeating the allies at the Battle of Raucoux.

xxxxxAfter the fall of the Austrian Netherlands and the settlement at Dresden, the war in Europe dragged on indecisively, with most fighting - sporadic in nature - confined to the Low Countries and Italy. By this time the Spanish had managed to capture Milan, but for the most part Austria's possessions in Italy remained intact. On the wider, colonial front, as we have seen (1744), the fighting was intensified between the British and French in both North America - where the British captured Louisbourg - and India, - where the French captured Madras. Neither side, however, had the resources or funds to conduct a full-scale war.

xxxxxThe financial burden imposed by this long and bitter War of the Austrian Succession eventually persuaded all powers to reach a settlement. Apart from one vital exception, the Treaty of Aix-la-Chapelle in 1748 virtually nullified all conquests made during the conflict - be it in Western Europe or distant colonial possessions - but its consequences were to prove far more significant than a general restoration of real estate might suggest, because Prussia remained in possession of Silesia.

xxxxxIncidentally, the French philosopher and writer Voltaire wrote a poem about the Battle of Fontenoy in the year that it took place, entitled, as one might expect, Poème de Fontenoy. ……

xxxxx…… The Irish Brigade, serving with the French army, was made up of Irish exiles. It was formed in 1690 - the year of the Battle of the Boyne - when, by arrangement, five Jacobite regiments were sent to France in exchange for a larger force of French infantry, despatched to Ireland to assist in the war against William III. The brigade was not disbanded, in fact, until 1792.