FLORENCE - BIRTHPLACE OF THE

xxxxxIt was in this year, 1436, that the architect Brunelleschi completed the cathedral's magnificent dome. That Florence should be the birthplace of the Italian Renaissance is not really surprising. Rome at this time was far too unstable politically, whilst Florence was strongly governed, highly prosperous, and home to the great patrons of art, the Medici family. This family came to power in 1434 under Cosimo de Medici (1389-1464). He gave generous support to the local sculptors, such as Ghiberti and Donatello, and a large number of artists, including Fra Filippo Lippi, Paolo Uccello and Fra Angelico. But his passion was for building. Under his guidance, architects like Brunelleschi and Michelozzo gave the city its architectural beauty. But Florence had even more to offer. Yet to come, for example, was the great painter Sandro Botticelli, the most generous patron of all, Lorenzo de Medici, and the giants of the High Renaissance, Leonardo da Vinci and Michelangelo.

aaaaaThat Italy should be the home of the Renaissance is hardly surprising, given its historical association with the Roman Empire and its abundance of classical ruins and artefacts. By the same token, within Italy itself, one would have expected Rome to be the birthplace of this cultural rebirth. But that honour fell to the city of Florence. Throughout the fourteenth and fifteenth centuries the political situation in Rome was far too unstable to provide the security and the tranquillity, let alone the financial backing, to be the launching pad for such a cultural revolution. Florence, on the other hand, was politically stable, highly prosperous, and the home of those fabulous patrons of the arts, the Medici family, from 1434 to 1492. 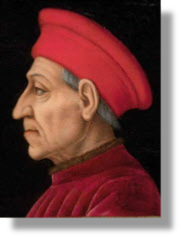 aaaaaThe Medici were an extraordinary family. They came into prominence as merchants and money-lenders in the 1260s, and by the fifteenth century they were one of the richest families in Italy. They came to political power in 1434 under Cosimo de Medici (1389-1464), a shrewd manipulator in both politics and business. The previous year the ruling aristocracy, fearing his growing support for the popular party, had had him imprisoned and awaiting death on the grounds that he had “sought to elevate himself higher than others”. He bribed himself out of prison, however, and, after a short while in exile, returned to Florence on a wave of popular support. From that time forward he never lost hold of the reins of government, always ensuring that his followers were elected to high office, and that Florence held the balance of power between the city states. This posthumous portrait of him was painted by the Italian artist Agnolo Bronzino in the 1500s.

aaaaaOnce politically secure, Cosimo was able to indulge in his passion for building. It was at this time, in 1436, that Brunelleschi completed the Cathedral’s magnificent dome and started on a number of projects, including the building of the rotunda of the Santa Maria degli Angeli. Alsoxemployed on this ambitious building programme was the architect Michelozzo di Bartolommeo (1396-1472). He designed, amongst other works, the Medici-Riccardi Palace, the Medici chapel at Santa Croce and the convent of Saint Marco. Much of the architectural beauty of the city is owed to the skill of such men and, above all, to the generosity of the Medici family.

aaaaaCosimo was himself a humanist. He was a great admirer of the Greek philosopher Plato and, under his guidance, scholars searched for ancient manuscripts, and the University of Florence resumed its teaching of Greek. In addition, he founded the Florence Academy and also established the extensive Medici library. Above all, he was a great patron of the visual arts. Apart from promoting the outstanding architects of the time - notably Brunelleschi and Michelozzo - he befriended as well as supported the sculptors Ghiberti and Donatello, and, amongst many others, the painters Fra Filippo Lippi, Paolo Uccello and Fra Angelico.

aaaaaIt is hard to believe that the city of Florence, which, as we have seen, could boast of such men as Dante, Boccaccio, Giotto, Ghiberti, Donatello and Brunelleschi - to mention but a few - could produce artists of even greater calibre and achievement. But this was only the Early Renaissance. As we shall see (H7), Florence was to be the home of the giants of the High Renaissance, Leonardo da Vinci and Michelangelo. And even before them, in the next reign (E4), was to come a man of hardly less talent, the Florentine painter Sandro Botticelli (1478), together with one of the greatest patrons of the arts, Lorenzo de Medici, known as Lorenzo the Magnificent (1469).

aaaaaIncidentally, the Medici coat of arms is made up of six balls, five red and one blue bearing the golden lily of France - a gift from Louis XI. The Medici (the word means “doctors”) were originally members of the guild of spice merchants and apothecaries (chemists), so the balls are thought to represent pills. Because the Medici became prominent money-lenders, it is from this coat of arms that the pawnbroker’s symbol, - made up of three balls - has evolved. ……

aaaaa…… Asxnoted earlier, the portrait above is by the leading Florentine painter Agnolo Bronzino (1503-1572). He painted numerous portraits of the Medici family and members of the court, as well as frescoes and religious paintings. His portraits are elegant but austere, capturing the arrogance of high society. He was a lifelong friend of the Italian architect and art historian Giorgio Vasari.

xxxxxFra Angelico (c1400-1455) was a painter and Dominican monk. His most impressive panels and altarpieces are to be seen in the monastery of Santo Marco in Florence. These include Madonna of the Star, Coronation of the Virgin, and his best known work, Madonna of the Linen Weavers. He also produced works for the Vatican, and his Christ in Glory surrounded by Saints and Angels, containing some 250 figures, is in the National Gallery, London. His work, calm and devout, combines the decorative Gothic style with the naturalism associated with his contemporaries Masaccio, Ghiberti and Donatello. He owes his ability to create the illusion of depth to his study of Alberti’s theories on perspective.

aaaaaFra Angelico (c1400-1455) from Vicchio in Tuscany was both a painter and a Dominican monk, hence his nickname. He started his artistic career as an illuminator of missals, but went on to produce a number of panels or altarpieces for the monastery of San Marco in Florence. These included Madonna of the Star, Coronation of the Virgin, the Deposition of the Last Judgement and his best known work, Madonna of the Linen Weavers, (commissioned by the linen merchants), which includes a charming frieze of angels playing musical instruments. Then, when his convent at Fiesole moved to San Marco, he painted many frescoes in his new home, including Christ as a Pilgrim and Transfiguration. He also produced works for chapels in the Vatican, and one of his paintings, Christ in Glory surrounded by Saints and Angels, containing some 250 figures, is in the National Gallery in London 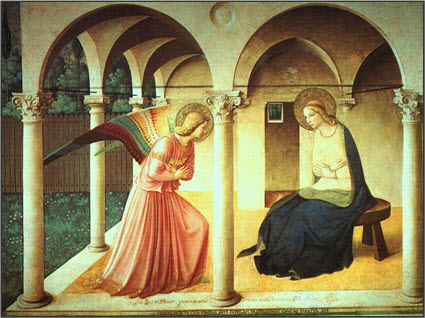 aaaaAs one might expect, all of Angelico’s paintings are concerned with religious subjects, and all are calm and devout in their treatment. In them he managed to combine the decorative Gothic style with the naturalism and realism associated with the Renaissance and readily appreciated in the works of his contemporaries, Masaccio, Ghiberti and Donatello. His talented use of the science of linear perspective, whereby the illusion of depth can be realistically captured (seen to good effect in the illustration on the left) owes much to his study of Alberti’s theories on perspective. This is a detail from his Annunciation, painted between 1438 and 1450.

Shown below are (left to right):The Arrest of Christ, The Coronation of the Virgin, and The Resurrection.

xxxxxThe writer and architect, Leon Battista Alberti (1404-72) was secretary to no less than six popes. He also served at the papal court in Florence where he came to know Donatello and Brunelleschi. His Treatise on Painting, written in 1436 was the first major commentary on the theory of art, and included a study of the science of linear perspective. A talented philosopher and poet, he also wrote a book on architecture and designed a number of buildings, including the facades of the Santa Maria Novella and the Palazzo Rucellai in Florence. 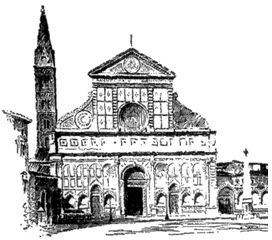 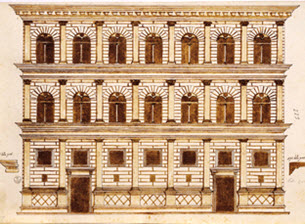 aaaaaThe writer and architect Leon Battista Alberti (1404-72) was born in Genoa and was secretary to no less than six popes. He spent nine years in the papal court at Florence and it was here that he became acquainted with both Donatello and Brunelleschi. His friendship with the latter probably accounts for his major work, Treatise on Painting, written in 1436. The first important commentary on the theory of art, it includes a detailed study of the science of linear perspective, a subject which Brunelleschi had pioneered and used to superb effect when designing his dome for the Cathedral.

aaaaaA man of immense talent, he was also a philosopher and poet, and one of the first organists of his day. While on a visit to Rome in the early 1430s he also gained a knowledge of architecture. He later wrote a book on this subject and made practical use of his knowledge by designing a number of buildings, including the facades of the Santa Maria Novella (illustrated on left) and the Palazzo Rucellai in Florence (illustrated on right).

xxxxxThe Florentine sculptor Luca della Robbia (1400-82) produced a number of major works for the city, none so delightful as the ten marble panels which make up the singing gallery in the cathedral. He also excelled in making glazed terracotta figures in bas-relief, many of them depicting the Madonna. His skill as a craftsman in marble and ceramics was continued by his nephew and pupil Andrea della Robbia. 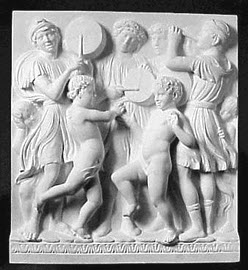 aaaaaFinally, mention must be made of Luca della Robbia (1400-1482) a member of a well-known Florentine family of sculptors and architects. He was responsible for a number of major works in the city, but none so magnificent or delightful as the singing gallery (known as the cantoria), executed for the cathedral. Completed in 1438 and now in the Duomo’s museum, it is made up of ten marble panels in high relief depicting groups of lively choristers, singing, dancing and playing musical instruments. (Illustrated here are boys playing the drums). He also developed a type of glazed terracotta with delicate bas-relief figures, mostly depicting the Madonna or other religious subjects. This work was initially in white and blue, but later other colours were added, enabling the introduction of wreaths of flowers and fruit.

aaaaaIllustrated here (left to right) are Virgin and Child with Lilies, The Ascension, Madonna of the apple, and Christ in prayer.

in marble and ceramics was continued by his nephew and pupil Andrea della Robbia, the artist responsible for the series of round sculptures on the facade of the Foundling Hospital, each depicting an infant in swaddling clothes - completed in 1466.