xxxxxThe Great Fire of London started in Pudding Lane in 1666 and, raging for four days, destroyed four fifths of the old city. It killed fewer than 20 people, but it destroyed 87 churches and over 13,000 wooden homes. The event was dramatically described by the diarists Samuel Pepys and John Evelyn. London Bridge and the Tower of London managed to survive, but St. Paul’s Cathedral was badly damaged. Many people took to the River Thames, whilst others made for the high ground at Highgate and Hampstead. The king visited Moorfields to assure the people that the fire had been “the hand of God”. Grandiose plans for rebuilding the city were quickly produced by Christopher Wren, John Evelyn and Robert Hook, but none was adopted. The massive task of reconstruction was given to Christopher Wren and his pupil Nicholas Hawksmoor, and much had been achieved by 1671. 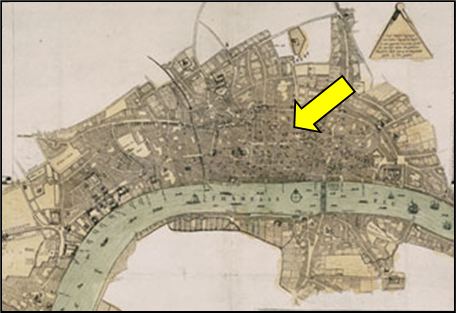 xxxxxThe fire, which began in the house of the king's baker in Pudding Lane, London, in the early hours of 2nd September 1666, raged for four days and destroyed about four fifths of that part of London within the old city walls (arrowed on map). By the time the flames had died down, many civic buildings, 87 churches, and well over 13,000 homes had been destroyed. Considering the extent of the damage, it was surprising that fewer than 20 people lost their lives. In some places the inferno, which eventually spread over more than 400 acres, was stopped by pulling down or blowing up buildings in order to create fire breaks. However, this was not always successful. Samuel Pepys wrote in his diary: "All over the Thames with one's face in the wind, you were almost burned with a shower of fire-drops. ... The houses were burned by these drops and flakes, three or four, nay five or six houses one from another." This is hardly surprising. All the dwellings were attached or very close to each other, built of timber, and coated with inflammable pitch to protect them against the weather!

xxxxxAnd a number of London's landmarks were put at serious risk. The old London Bridge survived because of its stone construction, but some of the shops upon it could not escape the blaze. At one time, the Tower of London was in danger, but was saved by pulling down the houses adjoining the mo 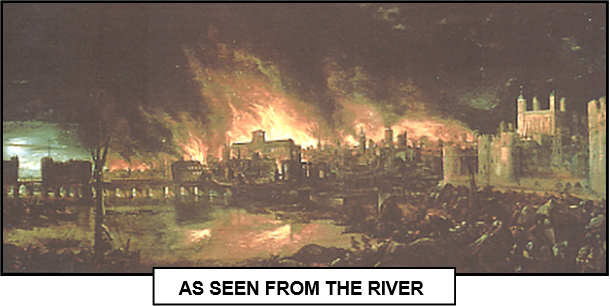 at. St. Paul's Cathedral, however, was surrounded by fire by the late afternoon. Eventually the roof timbers and their lead covering burst into flames and collapsed into the body of the church below, taking with them torrents of molten lead which ran down the adjoining streets, "glowing with fiery redness", as John Evelyn later recorded. Some of the worst damage was done at Cornhill. Here the imposing Royal Exchange with its fine arcade of marble columns was totally destroyed, together with its many fine shops, stocked with precious merchandise from the Orient.

xxxxxWhen the fire first began, matters were made worse by a strong easterly wind. One means of escaping the inferno was to take to the River Thames. This was crammed full with boats as people tried to save as many of their belongings as possible. Pepys later wrote: "Everybody endeavouring to remove their goods and flinging them into the river or bringing them into lighters (open boats)... Poor people staying in their houses as long as till the very fire touched them, and then running into boats.” Others left on foot, passing through the city gates in a constant stream. Many took refuge at Moorfields, whilst others fled to the high ground that makes up Highgate and Hampstead.

xxxxxIn these days each Parish was required to have a supply of buckets to convey water to a number of wooden tubs, and these were then wheeled to the scene of the fire and emptied by hand-operated pumps. For the water to be of any use, the pumps had to be used close to the fire and this meant that 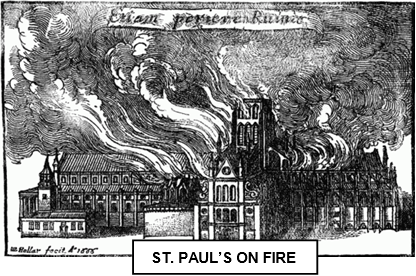 they were often consumed by the flames they were meant to extinguish! The local authority was also bound by law to provide a number of large hooks attached to ropes and long poles. These were used to pull down burning buildings or to create fire breaks, horses as well as men being used to carry out the task. Such methods proved totally inadequate to deal with the fire which swept through the city of London in the September of 1666. As a result, a number of insurance companies came into being over the next few years, and these formed their own fire brigades.

xxxxxBy the early hours of Wednesday the 5th September the wind had dropped and the fire was slowly brought under control. Almost from its very beginnings, however, rumours had spread throughout the city that the fire had been caused by enemies of the state. England was at war with the Dutch at this time, so they were prime suspects, closely followed by the Papists. Later, word went around that a force of some 50,000 French and Dutch were on their way to take over the defenceless city. Such rumours led to attacks upon any foreigner who was acting suspiciously, and the prisons soon housed a large number of suspects. It took a royal visit to Moorfields - where most of the homeless had taken refuge - to calm the situation. Charles told the huge crowd that the fire had been the "hand of God" and not the work of man.

xxxxxJust a few days after the fire, three different sets of plans were put forward for the rebuilding of the city, submitted by the architect Christopher Wren, the diarist John Evelyn, and the scientist Robert Hooke. All envisaged a more regular street plan for the city, with boulevards and open squares, but because the need to provide new homes was so urgent, none, in fact, was adopted. Furthermore, because it was stipulated that all new buildings should be made of stone and brick, the New London that arose from the ashes bore little resemblance to the quaint, half-timbered dwellings of the Old. However, many old streets were made wider and straighter, and by 1671 the majority of the houses had been rebuilt. Today, the Monument near London Bridge marks the spot where the city's worst fire broke out.

xxxxxAs we shall see, the daunting task of carrying out this extensive reconstruction was given to the architect Christopher Wren and his pupil Nicholas Hawksmoor. It was they who were to give the city a new skyline, dotted with dozens of church steeples and dominated by the massive dome of St. Paul's 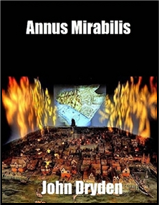 xxxxxIncidentally, in 1667 the English novelist John Dryden published his Annus Mirabilis describing the Wonderful Year of 1666. It not only commemorated the decisive English naval victory over the Dutch in July, but also praised the courage and fortitude of the people of London during the capital's great fire in the September.