xxxxxThe magnificent dome of Florence cathedral was the work of the Italian architect Filippo Brunelleschi. Despite strong competition, in 1420 he was named chief architect of the dome, and he began at once to build the vast cupola. In the early stages, many considered that his plans were totally unworkable, but by improved scaffolding and the inclusion of an inner shell, the dome was completed in 1436 without any central support. The result was a beautifully proportioned cupola, encased by eight external stone ribs, and pleasing the eye by its grandeur, harmony and classical simplicity. Among other works in the city by Brunelleschi are the Foundling Hospital and the churches of San Lorenzo and Santo Spirito. The classical style of these buildings was the result of a visit to Rome around 1401 with his friend the Italian sculptor Donatello. These classical buildings and the Duomo itself are often regarded as marking the beginning of the Renaissance in Europe, though the first signs of this “rebirth” can be seen long before this time. 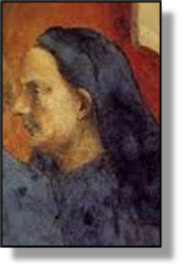 xxxxxFilippo Brunelleschi was the Italian artist responsible for the construction of the magnificent cathedral dome that dominates his native city of Florence. His work marks him out as one of the first and one of the greatest of Renaissance architects. He was born into a wealthy family and was well educated. Early on, he trained and worked as a goldsmith and sculptor, and he was one of the seven artists who competed for the commission to make the reliefs for the bronze doors of the Florence Baptistery. Despite his brilliant trial panel - The Sacrifice of Isaac - the competition was won by the Florentine goldsmith Lorenzo Ghiberti, and it was probably because of this setback that Brunelleschi turned his hand to architecture. It was a setback that was to prove a blessing in disguise.

xxxxxBrunelleschi began building the vast cupola of the duomo (the city’s Gothic cathedral) in 1420. Work on the cathedral had begun in 1296 under the direction of the Italian architect Arnolfo di Cambio, but had run into trouble over the structural difficulties encountered in the making of the vault. Despite bitter argument amongst the architects of the day as to how the job should be tackled, no solution was found and the work remained unfinished. In 1418 a competition was held and models were invited to show how a dome could be constructed. Many submitted solutions, including his rival Lorenzo Ghiberti, but this time it was Brunelleschi who won the day. In 1420 he was named chief architect of the dome project, a position he kept until his death in 1446. 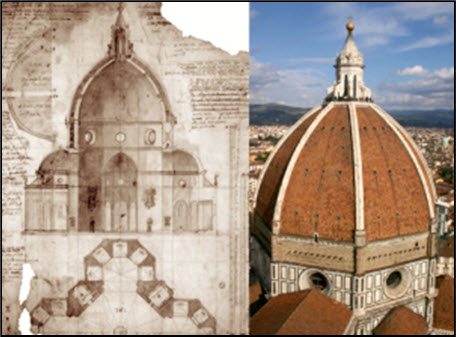 xxxxxHis octagonal dome, 130 ft in diameter and 300 ft high, is a masterpiece of construction and a joy to behold. At the drawing-board stage and during the early period of development, the plans were considered by many to be totally unworkable, but with the aid of improved hoists and scaffolding, the use of lighter stoneware, and the inclusion of a self-supporting inner shell, Brunelleschi was able to complete the dome without any central support. And the eight stone ribs which spanned the roof (in the Gothic tradition) provided the framework for that beautifully proportioned cupola that was to become such a magnificent feature of the Florentine skyline. Completed and consecrated in the year 1436, the dome revived the classical form in its simplicity, proportion and linear perspective, pleasing the beholder by its grandeur, harmony and air of tranquillity. The lantern, the small, decorated cupola on the top of the dome, was designed by the architect in the same year, but not completed until 1467. 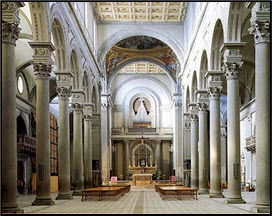 xxxxxBrunelleschi’s other works include the Foundling Hospital in Florence - his first major commission - the church of San Lorenzo, built for the Medici family (interior illustrated); the Church of Santo Spirito, begun in 1436, and the elegant Pazzi chapel commissioned by the wealthy family of that name, and built adjacent to the monastic church of Santa Crose. The classical style of these buildings - with arches, columns, pilasters, and friezes all designed to form one harmonious whole - improved in refinement and delicacy as his work progressed. It is clear that he came to admire Roman architecture and sculpture when he paid a visit to Rome around the year 1402 in the company of his friend, the Italian sculptor Donatello. It must be said, however, that while he initiated the elements of classical style in his buildings, there was still much of the Romanesque and late Gothic to be found in his architecture.

xxxxxFollowing his death in 1446, Brunelleschi was buried in the Basilica de Santa Maria del Fiore, beneath the dome he had planned and built. Just inside the entrance to the cathedral an epitaph reads: “Both the magnificent dome of this famous church and many other devices invented by Filippo the architect bear witness to his superb skill. Therefore, in tribute to his exceptional talents, a grateful country that will always remember him buries him here in the soil below”. Today, the building of the dome for Florence Cathedral, and Brunelleschi’s other works, are often regarded as marking the beginning of the Renaissance in Europe, the rebirth or rediscovery of the art and ideas of the ancient civilisations of Greece and Rome. It must be recognised, however, that signs of a Renaissance or re-birth can be seen long before this period.