xxxxxWith the capture of Cordoba by Ferdinand III in 1236 (H3), followed by the taking of Seville in 1248, only a small area in and around Grenada remained in Arab hands. As we have seen, in 1340 (E3) the Muslims did try to retake the peninsula, but they were soundly beaten and forced to return to North Africa. By this time Spain was made up of two large kingdoms, and with the marriage of their leaders, Ferdinand of Aragon and Isabella of Castile, in 1469, the unity of the country was in the making. At this time, however, both kept their crowns as "Catholic Monarchs". Nonetheless, they were united in their aim to rid Spain of any Arab occupation. As we shall see, this was accomplished in 1492 (H7) with the capture of Grenada and its fortified palace of Alhambra.

xxxxxIt was the Battle of Las Navas de 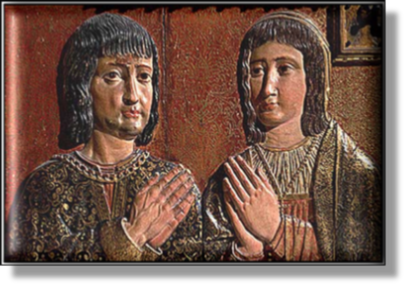 Tolosa in 1212 (JO) which marked the beginning of the end for Almohad rule in the Iberian peninsula. With the coming to power of Ferdinand III, determined to push the Moors out of Spain, their fate was sealed. In 1236 (H3) he captured the town of Cordoba, and after this one city after another fell to the Christian forces, strengthened by a large number of crusaders. When Seville was taken in 1248, only a small area in the south-east corner of Spain remained in Arab hands, centred on the city of Granada and its fortified palace of Alhambra. As we have seen, the Muslims did, in fact, make another attempt to take the peninsula in 1340 (E3), but having invaded and taken Gibraltar, their forces, under the command of Abu al-Hasan, were decisively beaten and had to make a hasty retreat back to North Africa. 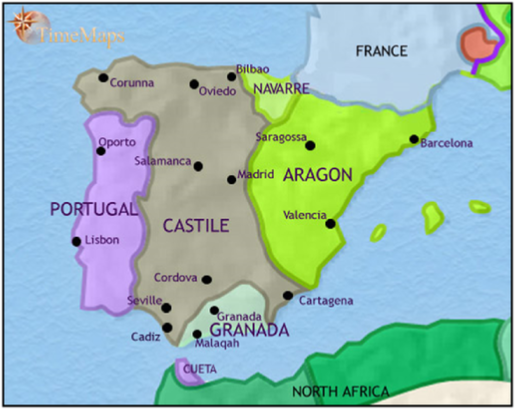 this time Christian Spain consisted of two great kingdoms. In the west was the Kingdom of Castile and Léon, with such centres as Asturias, Cordoba and Seville, and in the east was the Kingdom of Aragon, including Barcelona, Valencia and the Balearic Islands. In 1469, with the marriage of the leaders of these two powerful kingdoms, Ferdinand of Aragon (1452-1516) and Isabella of Castile and Léon (1451-1504), the stage was set for the making of Spain as a nation state. This was not, however, the immediate effect. Both leaders were anxious to maintain their sovereignty over their own kingdoms. Although both became joint rulers of Castile in 1474 and of Aragon in 1479, and both were referred to as the “Catholic Monarchs”, the union at this stage was not one of kingdoms but of crowns. Some reforms were introduced in the judicial system and royal administration, but the kingdoms differed greatly in size, wealth and institutions and it was to take some time before a meaningful unity evolved. Following the death of Ferdinand in 1516, however, his grandson, Charles, became the first king of Spain and, four years later, Holy Roman Emperor with the title Charles V.

xxxxxBut there was certainly agreement between the two kingdoms on one question: the need to complete the La Reconquista (The Reconquest). As we shall see, this was accomplished in 1492 (H7) with the capture of Granada and its fortified palace of Alhambra, the last Muslim stronghold in Spain.