xxxxxThe fanatical Almohads, having displaced their rivals, the Almoravids, began to hold sway in Spain by about 1172 onwards, confirming their hold with a sound victory over Alfonso VIII, king of Castile, at the Battle of Alarcos in 1195. But, as we have seen, their own days were numbered. Seventeen years later in 1212 (JO) a united force from Castile, Aragon and Navare won a significant victory over them at Las Navas de Tolosa, and this proved the beginning of their end. In 1236 the King of Castile and Leon, Ferdinand III, began a highly successful campaign. With the capture of Seville in 1248, only Granada remained in Moor hands. As we shall see, another Arab invasion was launched from North Africa in 1340 (E3), but it was repulsed within a few months of landing, and Granada was eventually captured in 1492 (H7).

xxxxxThe Almohads, a fanatical Muslim dynasty, held sway over much of Spain from about 1172 onwards, displacing the Almoravids in the Iberian peninsula after roundly defeating them in their native land of Morocco. In the early days of their conquest they proved a formidable force. In 1195, for example, the then king of Castile, Alfonso VIII, was soundly beaten by them near the fortress of Alarcos. Indeed, as we have seen, it was not until 1212 (JO), seventeen years later, that the united forces of Castile, Aragon and Navare, took on the army of the Almohad Sultan, An-Nasir, and convincingly won the Battle of Las Navas de Tolosa. 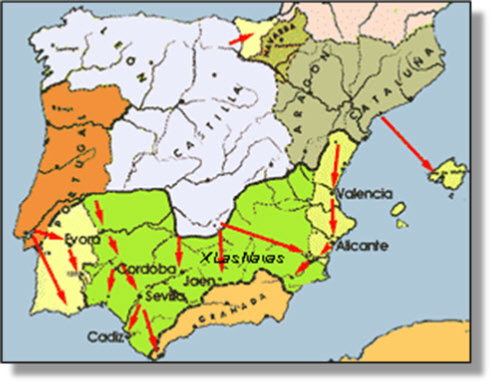 xxxxxThis Christian victory proved the beginning of the end for the Almohads. They never recovered their former power. In 1236 the king of Castile and Leon, Ferdinand III, determined to push the Moors out of Spain, attacked and captured the town of Cordoba. This success marked the beginning of a highly successful campaign. One city after another fell to the Christian forces, strengthened by a large number of crusaders, and when Seville was captured in 1248, the only centre of importance still held by the Muslims was Granada and its fortified palace of Alhambra. Surprisingly, this city survived for two and a half centuries and was the last to fall to the Christians. There were occasional skirmishes along the city walls but, for the most part, Granada remained isolated and at peace. Indeed, during the last half of the fourteenth century it became an important centre of learning.

xxxxxAs we shall see, in 1340 (E3) the Moors did make an attempt to recapture their lost ground in Spain, but the invasion was repulsed, and Granada was eventually captured in 1492 (H7), thereby bringing an end to the Arab occupation. 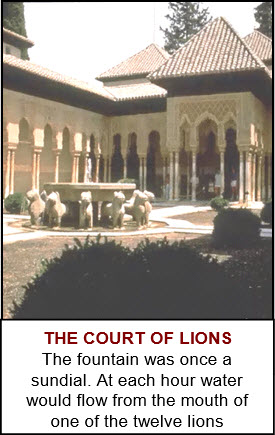 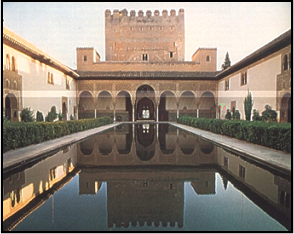 xxxxxThe building of the Alhambra Palace was begun in 1238 and was not completed until about 1358. Its entrance was defended by the Alcazaba or citadel, and parts of the massive walls, towers and ramparts of this fortress can still be seen today. The palace itself provides a fine example of Moorish architecture. There are six courts within the building. One, the Court of the Myrtle Trees, is particularly noted for its Muslim patios, whilst another contains a central fountain supported by twelve lions in white marble. Among the many halls and chambers is the Hall of the Ambassadors, one of the most ornately decorated rooms in the palace. The name Alhambra means "red" and derives from the colour of the rough-hewn bricks used in the building of the outer walls.

xxxxxIncidentally, in 1912 the French composer Claude Debussy wrote a piano piece entitled La Puerta del Vino (The Wine Door), named after the gateway in the palace where wine was distributed. He never visited Grenada, but his music brilliantly captured the mood of the Moorish setting. ……

xxxxx…… And the Spanish composer Francisco Tárrega (1852-1909) wrote a classical guitar piece named Tales of the Alhambra in 1896, the same title as that given earlier to a collection of stories by the American writer Washington Irving, published in 1832.