xxxxxThe gunpowder plot, aimed at blowing up the royal family and members of the Lords and Commons, was planned for the opening of Parliament in November 1605. A protest against the oppressive anti-Catholic laws, it was instigated by Robert Catesby and set up by Guy Fawkes, a soldier of fortune. But one of the conspirators warned a relative not to attend the opening of Parliament, and this gave the game away. Fawkes was caught in a vault below the House of Lords, and most of the other plotters were captured later. All were found guilty of treason and hanged, drawn and quartered in January 1606. There followed Protestant reprisals against Catholics, and the anti-Catholic laws were more rigorously enforced.

xxxxxThe Catholic conspiracy to blow up King James I, and his wife and eldest son, together with members of both the Lords and the Commons, was planned for the state opening of Parliament on the 5th of November 1605.

xxxxxThe plot was formed in protest against the oppressive anti-Catholic laws being enforced by James I at this time. It was Robert Catesby, a country gentleman from Warwickshire, who was the instigator of this daring but simple plan. He enlisted the support of his cousin Thomas Winter and his friends Thomas Percy and John Wright, together with a soldier of fortune called Guy Fawkes. Then, having established that there was indeed a vault which extended beneath the House of Lords - as Catesby had suspected - they rented this cellar in the Spring of 1605. Over a period of time, Fawkes then smuggled in some 20 barrels of gunpowder, hiding them under piles of coal and bundles of firewood. It was to be his task to set fire to the gunpowder by a fuse and then make his escape to Flanders.

xxxxxIn the meantime, however, Catesby, anxious to broaden support for the scheme, increased the number of conspirators. This proved a fatal mistake. One of these newcomers, Francis Tresham, warned his Catholic brother-in-law, Lord Monteagle, not to attend parliament on the 5th of November. Monteagle became suspicious and alerted the government. In the late hours of the 4th of November the cellar was searched and Fawkes was found preparing to set fire to a store of gunpowder. Under torture on the rack he confessed to his own part in the plot and, later, revealed the names of his associates. Catesby, together with thirteen other conspirators, managed to escape from London, but four days later they were cornered in Holbeche House, Staffordshire. Catesby and three others were killed resisting arrest, but the remainder were captured and taken to London. All were convicted of high treason and, together with Guy Fawkes, were hanged, drawn and quartered on the last day of January 1606. 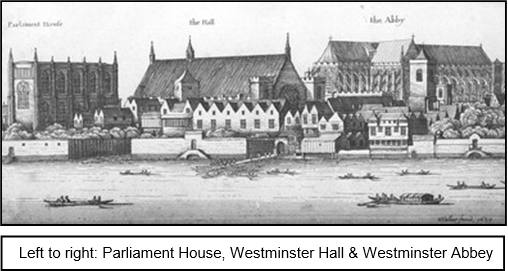 xxxxxThe aim of the plot had been to wipe out king and parliament in one gigantic explosion so that, in the ensuing confusion, the Catholics could seize the reins of government. The result, in fact, was the complete opposite. There were Protestant reprisals against Catholics, and the laws against them were more rigorously enforced. The recusancy law, in particular, which imposed fines on anyone who refused to attend Anglican services, was strenuously applied.

xxxxxIn the wake of their fortunate escape, members of parliament decreed that the 5th of November should be a day of thanksgiving. As a result, Guy Fawkes Day continues to be celebrated with bonfires, fireworks and the burning of a "guy". But, as we shall see, the searching of the vaults before the opening of each new session of parliament was not instituted until the so called Popish Plot of 1678 (C2). 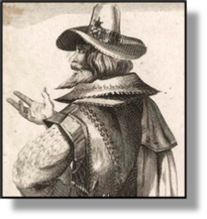 xxxxxRobert Catesby (1573-1605) (illustrated), the chief instigator of the Gunpowder Plot, was a member of a staunch Roman Catholic family in Warwickshire, and soon became known to the authorities as a potential trouble-maker. In 1601 he had taken an active part in the unsuccessful rebellion against Elizabeth I, led by the Earl of Essex, and for this he had been imprisoned and fined. Angered at the new monarch's failure to provide greater toleration towards English Catholics, he conceived the idea of this audacious plot as early as May 1603. In January 1604 he began to assemble a group of Catholic extremists, including the soldier Guy Fawkes. As an unknown, Fawkes was assigned the task of getting the gunpowder into the cellar and igniting it at the appointed hour. The other conspirators, many of them known to be ardent Catholics, dispersed in order to avoid suspicion. 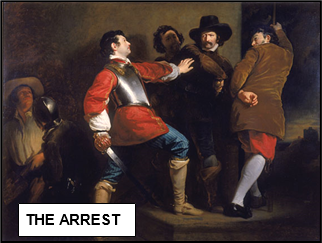 xxxxxHad matters been left there, the plot might well have been successful and, in that event, the course of English history would certainly have been changed, for better or worse. But it was at this juncture that Catesby, wanting to broaden the base of the conspiracy, invited support from other committed Catholics, and a hint of the plot fell into the wrong hands. As we have seen, Catesby and his fellow conspirators paid for this breach of confidence with their lives.

xxxxxToday, Guy Fawkes (1570-1606), the man tasked with lighting the fuse, is the best known member of the Gunpowder Plot. He was born at York, a member of a prominent Yorkshire family. He was Protestant by birth, but he became a Roman Catholic after his widowed mother married a man of Catholic persuasion. In 1593, in search of adventure and not wishing to live in Protestant England, he enlisted in the Spanish army in Flanders and distinguished himself three years later while taking part in the successful capture of Calais in the war against the French.

xxxxxIt was in April 1604 that Catesby, anxious to enlist a man who was not known to the authorities and who, as a soldier, had a knowledge of explosives, sent one of the conspirators to the Netherlands to see Fawkes. Although not fully aware of the part he was to play in the scheme of things, Fawkes agreed to join the conspiracy and returned to England. The rest is history. It is said that, following his arrest, he was tortured so badly that he hardly had the strength to climb the scaffold which, be it noted, had been erected opposite the Parliament building he came so near to destroying.