xxxxxAs we have seen, in 1882 the British, the masters of Egypt, decided to withdraw the Egyptian troops from the Sudan, then in a state of rebellion. There followed the siege of Khartoum and the killing of General Gordon and his garrison. In the late 1890s, however, fearing that other colonial powers, particularly the French, might seize the headwaters of the Nile - vital to Egypt’s survival - the British decided to re-conquer the Sudan. This was achieved by General Kitchener at the Battle of Omdurman in September 1898, but by then the French had put into operation a plan to unite their African colonies from west to east, thereby stopping the British from achieving a similar project north to south. Furthermore, with the support of the Ethiopians they planned to invade the Sudan and threaten Egypt by gaining control of the upper waters of the Nile. In July 1898 a small French force, led by Captain Marchand, crossed Africa from Senegal and, reaching Fashoda in the Sudan, claimed the area around the White Nile as a French protectorate. Kitchener, fresh from his victory at Omdurman, assembled a sizeable force and, travelling by boat, reached Fashoda in the September, but Marchand refused to vacate the area, and there followed a diplomatic row between France and Britain which almost led to a full-scale war. Eventually, however, the French realised that they were at a military disadvantage, and their troops were withdrawn. The “Fashoda Incident” caused ill-feeling between the two countries, but the fact that the crisis was solved diplomatically proved a turning point in Anglo-French relations, and, because of the growing might of Germany, it actually led to the Entente Cordiale of 1904.

xxxxxAs we have seen, after the British took over control of Egypt in 1882, following the Battle of Tel el Kebir, the British government decided that the Egyptian garrisons in the Sudan should be withdrawn. It was considered that this vast country to the south of Egypt, then in the throes of a rebellion by a religious fanatic, would be too expensive to pacify and too difficult to administer. It was during this withdrawal that Khartoum, the capital, was besieged by the Mahdists and General Charles Gordon and his garrison of 7,000 men were slaughtered when the city was finally entered in January 1885.

xxxxxTowards the end of the century, however, the British were forced to change this decision. Other European nations - such as Belgium, Italy and France - were beginning to see the Sudan - not yet colonized - as an area for occupation and exploitation. This alarmed the British government. If the Sudan were invaded and occupied, then the headwaters of the Nile, so vital to the political and economic stability of Egypt, would be in the hands of - and under the control of - a foreign power. It was for this reason that in March 1896 a large army commanded by General Herbert Kitchener was ordered to invade and re-conquer the Sudan. It was not until September 1898, however, that the victory at the Battle of Omdurman virtually secured the country for the British and by then it was too late. A French contingent had already arrived at Fashoda on the White Nile and claimed the area as a French protectorate. 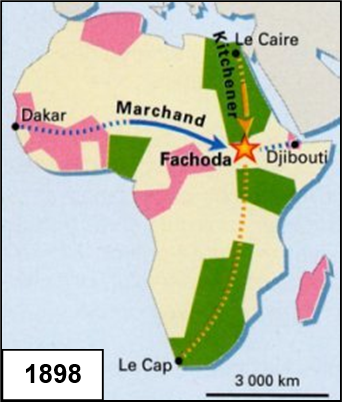 xxxxxFor some years the French had shown an interest in the African coastline along the Red Sea following French exploration of the area in the mid-19th century. In the 1880s they entered into trade agreements with a succession of Somali Sultans and, as a result, were granted a protectorate (French Somaliland) over the area known as Djibouti on the Gulf of Tadjoura. Then in 1896 their interest in the region was further heightened. In that year, as we have seen, they gave advice and war equipment to the Ethiopians, and this helped them to defeat an Italian invasion at the Battle of Adowa. In recognition of their assistance, their neighbours allowed them to use Ethiopia as a staging ground for incursions into southern Sudan. It was at this point that the French conceived the idea of laying on a military expedition that would march from West Africa - where they already had sizeable possessions - to Fashoda in southern Sudan, an ideal location for the building of a dam to divert - and thereby reduce - the upper waters of the White Nile. Such a project, they anticipated, would link French possessions across Africa from west to east (from the Niger to the Nile); prevent the British from joining up their territories from north to south (Cairo to Cape Town) - the life-long dream, as we have seen, of the British diamond magnate Cecil Rhodes - and possibly, by impeding the flow of the Nile, force the British out of Egypt. Thus the small settlement of Fashoda, by being at the point where the colonial ambitions of Britain and France crossed and clashed (see map), was set to become the centre of a major international crisis. 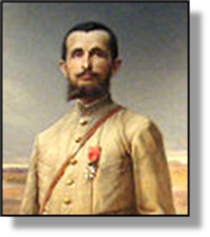 xxxxxThexNile Expedition, led by Captain Jean-Baptiste Marchand (illustrated), and made up of seven French officers and 120 Senegalese infantry, set out from Dakar on its ambitious and arduous mission in June 1897. It travelled up the Congo as far as Bangui, and then after a mammoth 14 month trek by foot and boat across the heart of Africa - much of the territory unchartered - the small contingent reached Fashoda in July 1898. There it raised the French flag and set about repairing the town’s dilapidated fort. According to a pre-arranged plan, it was due to meet up with two expeditions coming from the east, across Ethiopia, but neither turned up. Instead, in September Marchand was faced with the arrival of a sizeable Anglo-Egyptian force aboard five steamers. Having learnt from one of the Mahdist prisoners that a small French contingent had arrived at Fashoda, General Kitchener had quickly assembled a powerful flotilla and set off to put into effect what the re-conquest of the Sudan had all been about - the safeguarding of the upper waters of the Nile. But Marchand politely told the British commander that he was staying put. Kitchener, showing a great deal of restraint (especially since he had overwhelming superiority in manpower and firepower), raised the Union Jack alongside the Tricolour, set up camp, and left the politicians to sort it out. 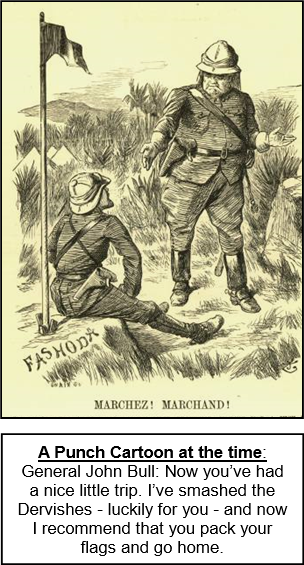 xxxxxThe military confrontation at Fashoda led to several weeks of intense negotiation between London and Paris, and public outrage in both countries reached to fever pitch. In October both nations began to mobilize their navies in preparation for war. The British claimed that the Sudan was an Egyptian protectorate and that, by their victory over the Sudanese at the Battle of Omdurman, they had re-conquered the country for the Khedive. The French argued that they had every right to possess the Upper Nile region because the British had failed to achieve an “effective occupation”, a requirement laid down by the Berlin Conference of 1884. What eventually brought about a settlement, however, was the practical realisation on the part of the French that they were not in a position to win in the dispute. Their army was far larger than that of the British, but it would have to be transported, and this would be a hazardous operation given the strength of the British navy. Furthermore, at ground zero - the area under dispute - the small French force would quickly be overwhelmed. And there was, too, a wider consideration. France was growing ever more concerned about the growing might of her land neighbour Germany. This was not the time to involve the country in a colonial war about a remote corner somewhere in Africa. On the 3rd November the French government ordered Major Marchand (promoted soon after arriving at Fashoda) to withdraw from the Sudan and return to France via Djibouti. He was much aggrieved at the decision, but he was obliged to obey. 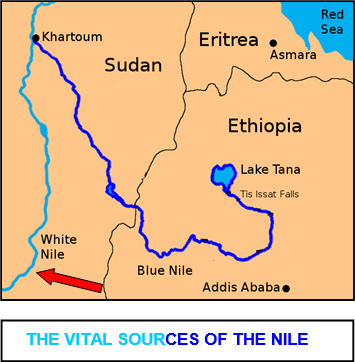 xxxxxThe settlement of the Fashoda crisis put an end to what came to be called “the race for the Nile”. There were three losers. Firstly, the French failed in their bid to establish a continuous band of colonies across Africa - aided and abetted by Ethiopia, their friend of convenience -, a move that would have enhanced their own position in Africa and, at the same time, curbed the power of Britain, their colonial rival. Secondly, there were the Russians, who as allies of the French, had themselves been drawn into the affairs of Ethiopia. They were never to realise their dream of gaining a foothold in Africa at the mouth of the Red Sea as a counterweight to Britain’s control of Egypt and the Suez Canal, and as a possible launching pad for a colonial future in Africa. And thirdly, there were the Ethiopians. Fresh from their great victory over the Italians at the Battle of Adowa, they embarked on territorial expansion in 1897 and by July had reached the White Nile and raised the Ethiopian flag alongside that of the French – their position arrowed on map above. But the capitulation of the French over Fashoda put an end to such grand ideas. In March 1902 the Ethiopian leader, Menelik II, was obliged to sign a treaty with Great Britain in which he renounced any claims to the east bank of the Nile, and pledged not to redirect any waters of the Nile’s tributaries without British permission. The sources of the Nile which, in the words of the young Winston Churchill, “are as much an integral part of Egypt as the roots are an integral part of a tree”, were firmly under British control.

xxxxxThe ill-feeling between the Britain and France took some time to die down. Indeed, the French were decidedly anti-British during the Second Anglo-Boer War that began the following year. However, a settlement of the Fashoda dispute in March 1899 by which the French were allowed to expand eastward up to (but not including) the Nile watershed, somewhat took the sting out of the dispute. Furthermore, the fact that the two armies at Fashoda had not fought each other on the spot, and that

the matter had been eventually resolved by diplomatic means was a turning point in Anglo-French relations. Given the changing balance of power on the European continent, it paved the way for a rapprochement between the two nations, the Entente Cordiale of 1904. This eventually developed into a military alliance against Germany in the First World War. 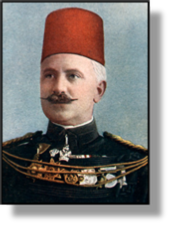 xxxxxIn the Sudan, there was much to be done. Following the final defeat of the Mahdist forces at the Battle of Umm Diwaykarat in November 1899, work was begun on the administration of the country. An Anglo-Egyptian Condominium was set up by which sovereignty was jointly shared by the Khedive and the British crown, though, in reality, the control of the country was largely in the hands of the British. The executive power was invested in a governor-general, nominated by the British government, and his first task was to restore order throughout the country. The northern region of the Sudan was pacified within a short time, and steps were taken to modernise the administration, but in the south the keeping of the peace proved the major task. LordxKitchener served as the first governor-general, but he was soon succeeded by General Sir Francis Reginald Wingate (1861-1953) (illustrated), a man who knew the Sudan well and, like Lord Cromer (1841-1917) in Egypt, introduced reforms, encouraged development, and greatly improved the lives of the ordinary people.

xxxxxIncidentally, earlier in his career Major Jean-Baptiste Marchand (1863-1934) had taken part in the French conquest of Senegal, and in 1889 had been severely wounded during the capture of Diena in Mali. He later fought with the French expedition to China during the Boxer Rebellion of 1900, and was promoted to the rank of general during the First World War.