xxxxxThe English archaeologist Arthur Evans, son of John Evans, an amateur archaeologist and coin collector, began digging on the island of Crete in 1900, and within six years had uncovered the huge palace of Knossos, over five acres in size and made up of a maze of store rooms and chambers, all joined by numerous tunnels and staircases. This revealed Europe’s oldest civilisation, a Bronze Age civilisation which flourished between 3000 and 1400 BC, and predated the Mycenean Civilisation in Greece. He named it the Minoan Civilisation after Minos the mythical King of Crete. He worked intermittently on the site until 1931, unearthing a wide range of artefacts, including miniature sculptures, ornate pieces of metalwork and jewellery, and a large range of pottery from primitive vessels to delicate vases with exquisite designs. His reconstruction of the buildings and the impressive frescoes they contained was somewhat overdone, but it did give some idea of the grandeur of the palace in its heyday. Evans was curator of the Ashmolean Museum in Oxford for over twenty years, and during this time did much to improve the layout and expand the contents. 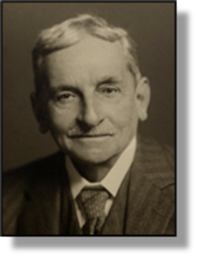 xxxxxIt was in 1900, while digging at Knossos on the island of Crete, that the English archaeologist Arthur Evans discovered Europe’s oldest civilisation. His unearthing of a vast and magnificent palace complex revealed a hitherto unknown Bronze Age civilisation that flourished between 3000 and 1400 BC, predating that of the Mycenean Civilisation in Greece. Hexnamed it the Minoan Civilisation, after Minos the mythical King of Crete. His excavations at this site continued for some thirty years and revealed, in addition to a wealth of Minoan artefacts and hundreds of inscribed clay tablets, an even earlier culture belonging to the New Stone Age.

xxxxxEvansxwas born at Nash Mills in Hertfordshire, the son of John Evans (1823-1908), a distinguished amateur archaeologist and coin collector who made his name as an authority on the Neolithic and Bronze Age periods in Great Britain and Ireland. Arthur, the eldest son, was educated at Harrow School, and then studied modern history at Oxford from 1870 t 1874. A young man who was determined to follow in his father’s footsteps, it was while at Oxford that he embarked on a series of intrepid journeys, accompanied by one or other of his brothers. He visited Hallstatt in Austria - a Celtic archaeological landmark - travelled to the Balkans, adventured into the Carpathians, and explored Finland and Lapland on foot. Throughout his travels he made notes on the places he visited, the people he met, and the artefacts he found, and these provided articles for the Manchester Guardian newspaper. On gaining his degree he spent four months studying at Gottingen University before resuming his travels, this time to Bosnia Herzegivina in the Balkans, where a rising against the Turks was in progress. Then in a later visit to Dalmatia to study Roman antiquities, he was accused of supporting a popular uprising and spent some weeks in prison at Ragusa (now Dubrovnic) before being allowed home.

xxxxxIn 1884 Evans was appointed the curator of the Ashmolean Museum in Oxford. During his tenure, which included his early years excavating in Crete, he totally reorganised the museum, modernizing its layout, extending its floor space and substantially increasing its contents. Apart from donating many of his own Cretan antiquities, he added his father’s extensive archaeological finds, together with the valuable Fortnum Collection of finger rings, Italian majolica (tin glazed pottery) and Renaissance bronzes, amassed over many years by the antiquarian C.D.E. Fortnum.

xxxxxIn 1893 he made his first visit to Crete to study the prehistory of the island. He examined the inscriptions engraved on ancient seal stones, and the following year announced the discovery of a pre-Phoenician script, later designated Linear Script B. Then in 1896, after carrying out a careful exploration of the island, he made public his theory that the Mycenaean civilisation that had flourished on the Greek mainland between 1600 to 1100 BC had had its origins in Crete. The opportunity to prove this claim had to be postponed for two years due to the Greco-Turkish War that broke out over Crete in April 1897, but with the Turkish withdrawal from the island in 1898, work could begin. The following year he bought a tract of land which included the settlement of Knossos (see map above), and built a house overlooking the site (which he named Villa Ariadne after the daughter of King Minos). He began his excavations in 1900 and these continued, intermittently, until 1931. However, with the assistance of a large labour force he had uncovered most of the site - over five acres in size - by 1906.

xxxxxHis digging unearthed the ruins of the Bronze Age palace of Knossos, constructed after the destruction of an earlier palace - a single building with a central courtyard - around 1700 BC (probably due to a huge earthquake in the Aegean Sea). The vast, elaborate complex that replaced it had more than a thousand chambers, built on three or four different levels and joined by numerous passages and staircases. There was evidence of a highly decorated throne room and banqueting hall, and a large number of workshops, store rooms, and places of worship. Some of these showed the remains of colourful frescoes, many showing pictures of the bull, in keeping with mythical legend. It was evident, from the vastness of the complex and the one-time splendour of the buildings, that Knossos had been the ancient capital and cultural centre of the island. Furthermore, by an examination of Egyptian artefacts found on the site, Evans came to the conclusion that the Minoan civilization was in existence before the Mycenean Civilisation, discovered recently on the mainland of Greece by the German amateur archaeologist Heinrich Schliemann. It was at its height from 1700 to 1450, during which time it rivalled the cultural achievements of Egypt and Mesopotamia, and influenced artwork and the making of fine products - such as jewellery and gold and silver vases - on the Greek mainland (though subsequent research has shown that Evans tended to over estimate the impact of Minoan culture in this respect). 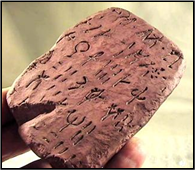 xxxxxApart from the numerous frescoes, there was a wide range of artefacts found within the palace, including a number of miniature sculptures, some intricate metalwork, and a quantity of exquisite jewellery in gold and silver, all on a small scale. The pottery, which made up a large bulk of the finds, spanned the years from the most primitive of vessels to delicate vases of various shapes and sizes, many adorned with floral motifs or decorated with abstract designs on a black glaze. Also found were a number of giant jars to hold wine, olive oil or grain. In addition, hundreds of clay tablets, some 3000 in all, came to light, inscribed with two scripts, named Linear A and Linear B. The first, the language of Minoan Crete, has yet to be deciphered, but the second (illustrated), examined earlier by Evans, was confirmed in 1952 as an early Greek dialect.

xxxxxEvans continued to work in Crete up to 1931. He was appointed professor of prehistoric archaeology at Oxford in 1909, and was knighted two years later. From 1894 he lived at Youlbury, the name of his house on Boars Hill near Oxford. His writings included Cretan Pictographs and Prae-Phoenican Script, published in 1895, Scripta Minoa in 1909, and his major work The Palace of Minos, a work of four volumes completed in 1935. He died in 1941 during the Second World War. Evans was an accomplished archaeologist, noted for his imaginative flair and bounding energy. His work in Crete, advancing as it did the knowledge of eastern Mediterranean prehistory, was an outstanding achievement. The German Henry Schliemann, whom Evans knew, had planned to dig in Crete, but he died before he could do so, and it was left to Evans to discover the Minoan civilisation, ancestor of classical Greece and Europe’s first civilisation.

xxxxxIncidentally, the first man to uncover part of the palace at Knossos was not Evans but Minos Kalokairinos (born 1843), a local merchant who had an interest in antiquity. He discovered two of the palace store rooms in 1878, but the Turkish owners of the site then put a stop to his digging. The island had gained its independence by the time Evans began his excavations. ……

xxxxx…… When he died Evans left word that part of his estate was to be sold to the Boy Scout Movement “at a reasonable price”. Today Youlbury Camp, a 42 acre site in Oxfordshire, is used by Guides, schools and youth clubs as well as Scouts. …… 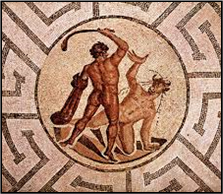 xxxxx…… It was the ground plan of the palace with its maze of rooms connected by narrow passages that reminded Evans of the “labyrinth” in the mythical story of King Minos and provided the name for the Bronze Age civilisation. Minos offended the gods and they punished him by making his wife fall in love with a bull. She gave birth to the Minotaur, a monster half man and half bull, and Minos had the labyrinth built to hide away this frightening beast. It was eventually slain by Theseus, the son of King Aegeus of Athens. As Schliemann earlier found, these legends from Greek mythology, though fanciful in themselves, often had their roots in a measure of historical fact. 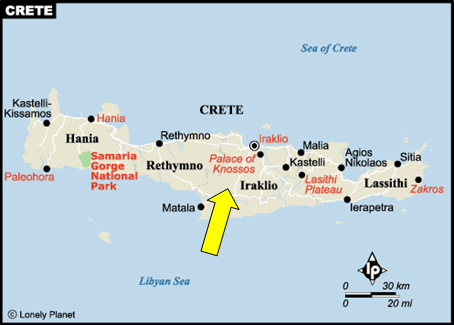 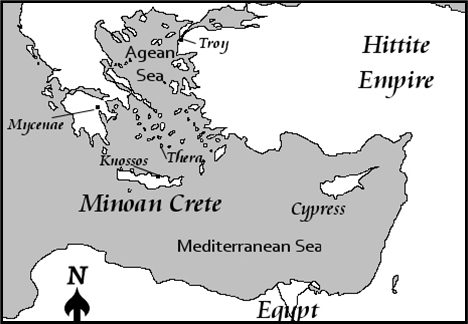