Victoria: by the society portrait photographer Alexander Bassano of London (1829-1913), 1887. Durbar: coloured lithograph from the book The History of the Imperial Assemblage at Delhi, prepared and published by the English historian James Talboys Wheeler (1824-1897), 1878, artist unknown, photo: Adfasd Pictures, Images and Photos. 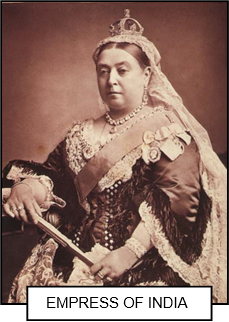 xxxxxThe title of Empress of India was conferred on Queen Victoria by the Royal Titles Act of 1876 and proclaimed at the Delhi Durbar in May the following year. The new viceroy of India, the Earl of Lytton, wrote to the Queen describing the scene on the Plain of Delhi, where the proclamation was made in front of “a vast concourse of native Princes and nobles from all parts of India”.

xxxxxInitiated by the prime minister Benjamin Disraeli, the imperial title greatly pleased the Queen, and doubtless contributed to the slow recovery she was making following the death of Prince Albert in 1861. She had always shown an interest in imperial matters (and in India in particular) but, this apart, she had wanted the title for personal and, it can be said, understandable reasons. There were three emperors on the continent - in Russia, Austria and Germany - and Napoleon III had held the title for eighteen years after seizing power in France in 1851. Furthermore her 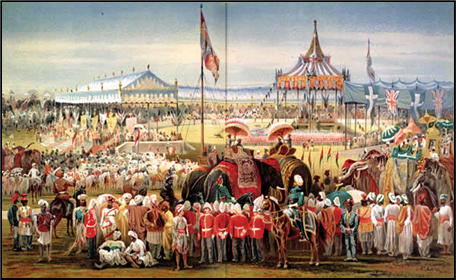 daughter Victoria, the Princess Royal, had married the heir to the German imperial throne and would become an Empress when he became Emperor (as he did in 1888). It seemed improper that the Queen should be outranked by her daughter in this way.