xxxxxThe writer George Eliot, pen name of Mary Ann Evans, produced her first major novel, Adam Bede, in 1859. This was followed by The Mill on the Floss in 1860, and Silas Marner the following year. Her masterpiece, Middlemarch, produced in serial form in 1871 and set amid the troubled times of the first Reform Bill of 1832, was noted for its complex story, made up of a number of interwoven plots. In these works in particular, she revealed her exceptional gifts as one of the most outstanding realists of Victorian fiction. They demonstrated above all the depth of her psychological insight into the makeup of character, and her deep and sympathetic understanding of the lives of ordinary people, be it in a rural setting or a provincial town. Her writing had an impact on the development of the modern novel, and influenced in particular the American novelist Henry James. Her Scenes from Clerical Life, a collection of her earlier stories, impressed both Charles Dickens and William Thackeray. A highly intelligent woman with a mind of her own, for many years she lived with the critic George Henry Lewes, a married man. This affected her standing in general society, but her talent was recognised in literary circles, and her brilliant portrayal of everyday life earned her an international reputation. Among the writers she knew were Thomas Carlyle and Herbert Spencer. 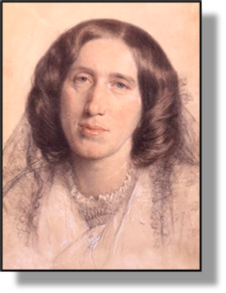 xxxxxThe English novelist George Eliot, the pen name of Mary Ann Evans, was born at Chilvers Coton in Warwickshire. She attended the local school at Nuneaton, and then a boarding school in Coventry. Her father, an estate agent, insisted that she had a strict religious upbringing, but in the early 1840s she rebelled against Christian dogma and went on to translate works by two well known critics of the bible, the German theologians David Friedrich Strauss and Ludwig Feuerbach. She moved to London after the death of her father in 1849 and, joining a band of avant-garde intellectuals, became assistant editor of The Westminster Review, a journal edited earlier by John Stuart Mill. Here she came to know the leading literary figures of the day, including Thomas Carlyle and Herbert Spencer.

xxxxxItxwas via the Review that she also met the critic George Henry Lewes (1817-1878). He was married but separated from his wife, and from 1854 Eliot lived with him until his death in 1878. He it was who, realising her talent, started her on her literary career. He encouraged her to write fiction under a pen name, and he dealt with publishers on her behalf. Her first piece, The Sad Fortunes of the Reverend Amos Barton, was produced in Blackwood’s Magazine in 1857. It was an instant success, and the following year this story and a number of other short stories, including Mr.Gilfil’s Love Story and Janet’s Repentance, were published under the title Scenes from Clerical Life. 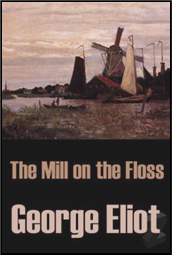 xxxxxSurprised and encouraged by the success of these first attempts, she turned to writing full-length novels.

was published in 1859, and this revealed her exceptional gifts as a writer, establishing her reputation - even at this early stage - as one of the most outstanding realists of Victorian fiction. It demonstrated, as did her later novels, the depth of her psychological insight into the makeup of character, and her astute and compassionate understanding of the lives of ordinary people, faced with the social and moral stresses of the day, and the twists 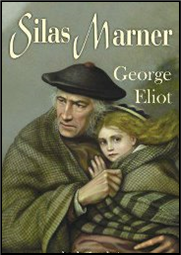 and turns of fate. This was followed by The Mill on the Floss of 1860 - a semi-autobiographical work which ends in tragedy - and Silas Marner the following year, the moving tale of a weaver whose lost gold is more than compensated by his love for a small child. All three novels were close studies of rural life as observed in her home county of Warwickshire, and each contained a strong element of moral judgement.

xxxxxIn 1865, following a fact-finding trip to Florence, she produced her historical romance Romola, centred around the life and times of Girolamo Savonarola, the 5th century Italian preacher and reformer. This appeared in serial form in the Cornhill Magazine, then under the editorship of William Thackeray, and earned her a huge sum for those times, said to be around £10,000. Then, following a foray into politics with Felix Holt the Radical, she produced Middlemarch in 1871. Published in serial form over two years and set amid the troubled times 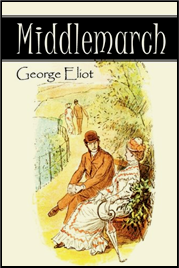 of the Reform Bill of 1832, it was remarkable not only for its true-to-life portrayal of every class of society in an English provincial town, but also for the complex tale it weaved in tracing four well defined but interwoven plots. Her realistic analysis of the large number of characters involved, many featuring in more than one of the basic stories, together with her deep and sympathetic understanding of the day-to-day social and personal problems these diverse characters faced, made this one of the greatest realist novels of all time.

xxxxxDaniel Deronda, a visionary novel about the prospects of a Jewish state in Palestine, was written in 1876, two years before the death of Lewes. His death saddened her deeply, and for some months she shut herself away from society. Then in May 1880, at the age of 61, and just seven months before her own death, she married John Cross, (1840-1924) a banker and long time friend. Among her other works was her collection of essays, The Impressions of Theophrastus Such, published in 1879, and her poetic works, which included The Spanish Gypsy and The Legend of Jubal and Other Poems.

xxxxxEliot was buried in Highgate cemetery, London, and enshrined in Westminster Abbey in 1980, the centenary of her death. A highly intelligent and gifted woman, she gained international fame as a master of moral realism in the literary world, though her unconventional behaviour raised eyebrows in society at large. She had a mind of her own, and in both religion and her personal relationships she was prepared to challenge social convention. Her work had an impact on the development of the modern novel and influenced, in particular, the American novelist Henry James. Her Scenes from Clerical Life impressed both Charles Dickens and William Thackeray. 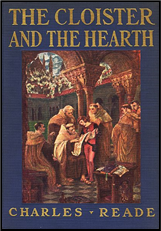 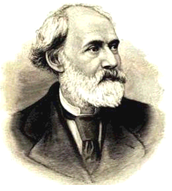 xxxxxAnother English writer of this period who highlighted some of the appalling social conditions of the time was the novelist Charles Reade (1814-1884). After producing for the stage, he began writing a series of fourteen novels in which he exposed and denounced a variety of social ills. His It is Never Too Late to Mend, for example, published in 1856, criticised the appalling living conditions of those committed to prison, whilst the general lack of care and ill-treatment of mental patients was condemned in his Hard Cash of 1863. He is remembered today, however, for his The Cloister and the Hearth, published in 1861, a well written medieval romance tracing the adventures of the father of the Dutch humanist Desiderius Erasmus.

xxxxxIncidentally, his Foul Play of 1868, co-produced with the Irish-American playwright Dion Boucicault (1820-1890), drew attention to the overloading of merchant vessels - termed “coffin ships” - and played a part in bringing about the safety measures proposed and eventually achieved by the social reformer and member of parliament Samuel Plimsoll (1824-1898). By the Merchant Shipping Act of 1876 a “plimsoll line” had to be painted on the hull of all merchant ships to indicate the legal level to which a vessel could be safely loaded. A memorial to Plimsoll was later erected on Victoria Embankment in London.