xxxxxAs we have seen, in 1839 (Va) the French painter Louis Daguerre invented a photographic process known as the “daguerreotype”, and in the same year the English chemist William Henry Fox Talbot introduced the “calotype process” whereby many prints could be made from a single negative. Taking advantage of these improvements, in 1888 the American inventor George Eastman came up with an inexpensive handheld box camera and the slogan “You press the button. We do the rest”. Known as a “Kodak” and using celluloid roll film, this camera could be sent back to Eastman’s factory at Rochester, New York, when the film had been used, and then returned to its owner with the film processed and a new one already loaded. This idea proved immensely popular, and became even more so in 1900 when the Kodak Brownie enabled the film alone to be removed and sent for processing. By that year this quality camera was selling for as little as a dollar, and by the mid 1920s the Eastman Kodak Photographic Company was trading worldwide, and had the monopoly of the market in the United States. As a result, Eastman made a vast fortune, but he introduced a profit-sharing scheme for his employees, and he gave enormous amounts of money towards public health and places of learning, such as the Massachusetts Institute of Technology and Rochester University. A brilliant inventor and entrepreneur he made photography a popular pastime at the press of a button. Furthermore, as we shall see, his introduction of the celluloid roll film made a very valuable contribution to the development of motion pictures, and the production of Thomas Edison’s Kinetoscope, a peep-show of moving pictures, in 1891. 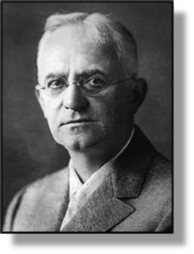 xxxxxEarlier in the century, as we have seen, the French painter Louis Daguerre and the English chemist William Henry Fox Talbot made important advances in the development of photography. In 1839 (Va) Daguerre invented a single-image process, and his prints or “daguerreotypes” became widely used throughout Europe and North America. And in the same year Fox Talbot, by his “calotype process” - whereby multiple prints could be made from a single negative - anticipated the very lines along which modern photography was to develop. Fox Talbot himself claimed that he had based the art of photography “on a sure foundation”.

xxxxxGeorge Eastman (illustrated above) was the man who built upon this foundation, and, as it proved, on a very large scale. His production of the “Kodak” box camera in 1888, plus his introduction of celluloid roll-film just a year later, made photography a relatively inexpensive pastime, and one that became immensely popular with the public at large. And, as we shall see, the introduction of celluloid film in the form of a roll enabled Thomas Edison’s company to make one of the first successful motion picture peep shows in 1891.

xxxxxEastman was born in Waterville, New York. His family moved to Rochester, New York, when he was five and it was there that he went to school. He showed scant ability in his studies, and, following his father’s death, he left school at fourteen to help his mother make ends meet. He worked for a time as an office boy in an insurance firm, but in 1874 he managed to get a job in the Rochester Savings Bank. His increased salary enabled him to indulge in his pet hobby, photography, and he bought a camera and all the paraphernalia that went with it - tripod, glass plates, bottles of chemicals and measuring glasses. Gifted with an inventive mind and a good business sense, within three years he had perfected a machine which, by producing dry pre-coated plates, replaced the wet plate then in use. In April 1880, quick to sum up the commercial potential, he set up the Eastman Dry Plate Company in Rochester, and was soon mass producing dry plates for an expanding photographic industry. 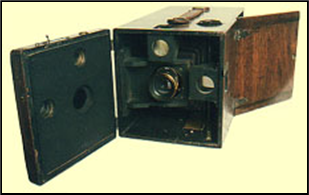 xxxxxSpurred on by this success, and determined to simplify the photographic process, he then set about replacing the dry plate with a 20-foot roll of flexible sensitized paper which was long enough to take 100 exposures, and rolled up on a spool. It was this system that he incorporated into his simple, handheld box camera named the “Kodak” (illustrated). Produced in 1888 and not over expensive, it was an outstanding success, made the more so by Eastman’s brilliant and true-to-its-word slogan “You press the button, we do the rest”. Once the film was finished the amateur photographer - a rapidly growing breed - simply sent the camera to Rochester, and it was returned with the film processed and a new film loaded, ready for use. Refinements quickly followed. The spool, originally fitted externally, was accommod 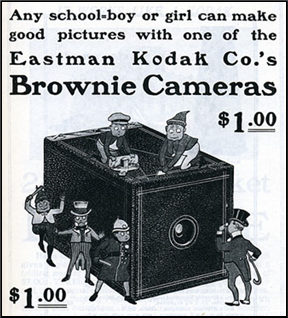 ated inside the box, and the following year the paper roll was replaced by a roll of transparent celluloid film (The brainchild, in fact, of the American clergyman Hannibal Goodwin in 1887.) Then in 1890 Eastman introduced the “Brownie”. This was a box camera designed along the same lines, but it was less expensive, and the spool was able to be removed, doing away with the need to send the whole camera back to the factory.

xxxxxSuch was the demand for this revolutionary idea that in 1892 he established the Eastman Kodak Photographic Company, again at Rochester, and became one of the first firms to mass-produce not only cameras, but also film and a variety of photographic accessories. By the turn of the century the company was selling a pocket-size camera for as little as a dollar, and come the mid 1920s, it was trading worldwide and had a virtual monopoly of the photographic industry in the United States. As director of the company he was one of the first to introduce a profit sharing scheme for his employees, and to offer them life insurance and disability pensions.

xxxxxQuite apart from becoming one of the world’s leading industrialists, Eastman was also one of the outstanding philanthropists of his time. Few men since or after him have given so generously to worthy causes. It is estimated that he donated more than $75 million to various projects. His contributions included large amounts to the Massachusetts Institute of Technology, endowments for the establishment of the Eastman School of Music in 1918 and, three years later, a school of medicine and dentistry at the University of Rochester. Just before his death he set up dental clinics in a number of European capitals, including London and Paris.

xxxxxEastman was ever full of new ideas, and a brilliant entrepreneur, but, privately, he was a very modest man who shunned publicity. Ironically, despite his generous contributions to public health, and his own private fortune, he was struck down in his last years by an incurable disease of the spine and could do nothing to alleviate his suffering. The pain became so acute that in March 1932 he took his own life with a single gunshot to the heart. A note he left read: “My work is done. Why wait?”. The funeral was held at St. Paul’s Episcopal Church, Rochester, and he was buried in the city in the grounds of the company he had founded at Kodak Park. 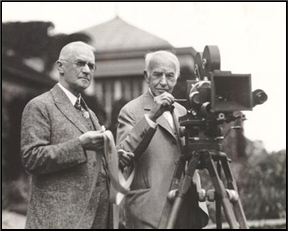 xxxxxEastman did not only succeed in making photography an inexpensive and popular pastime at the press of a button. His major contribution to the development of the camera also played a vital part in the invention of motion pictures. As we shall see, his celluloid roll-film was used by Thomas Edison’s laboratory at West Orange, New Jersey, and made a most valuable contribution to the success of the Kinetoscope, a peep-show of moving images, invented in 1891. The photograph shows Eastman and Edison together in 1928, with Eastman on the left.

xxxxxIncidentally, the trademark “Kodak”, adopted by Eastman in 1888, is not named after any person or thing. He thought the letter “K” had a good ring about it, and just came up with a short, sharp word that began and ended with this letter! …… 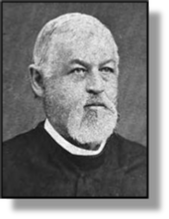 xxxxx…… ThexAmerican clergyman Hannibal Goodwin (1822-1900) of Newark, New Jersey, in his search for a non-breakable and transparent material to record the images he used in his bible teaching, appears to have been the first person to come up with the idea of using celluloid film in a roll. He patented the idea in 1887, but the patent was not granted until September 1898, and he died of an accident in 1900. In the meantime Eastman began using celluloid film in 1889. According to some he developed this by using his own process, but others accused him of appropriating Goodwin’s invention. Eventually, in fact, Eastman was found guilty of so doing in 1914, and was obliged to pay a large sum in compensation. ……