xxxxxIn 1722 the Dutch admiral Jacob Roggeveen became the first European to set foot on Easter Island in the south-east corner of the Pacific. He only stayed there a few days, but he later described the awesome array of huge man-like statues, standing along the coast and worshipped by the natives. The Spanish visited the island in 1770, and they were followed by the British and French, but it was claimed by Chile in 1888. The statues, made of soft volcanic rock, are thought to date from 1000 to 1500 AD.

xxxxxThe Dutch admiral Jacob Roggeveen was the first European to set foot on Easter Island. He landed there in 1722 during a crossing of the Pacific from east to west. He only stayed on the island a few days, but afterwards described an awesome array of huge standing statues in human form, many mounted on funeral platforms along the coast, and all facing inwards. Here, natives of mixed race worshipped the stone figures, and prostrated themselves before the rising sun. He noted that some of the inhabitants were "white men" and that their earlobes had been split and were hanging down to their shoulders.

xxxxxThe native name for the island was Te Pito te Henua (Navel of the World) or Rapa Nui (Great Rapa), but Roggeveen named it Paaseiland (Easter Island) in memory of the day the island was first sighted, and this name has been retained. It is situated in the lonely south-east corner of the Pacific Ocean, some 2200 miles from Chile to the east, and over 1000 miles from Pitcairn, the nearest inhabited island, to the west. It is only 55 square miles, and has three extinct volcanoes. The inhabitants are now known to be of South American and Polynesian origin, descendants of two ethnic groups known as the "Long Ears" and "Short Ears". Following Roggeveen's discovery, the Spanish visited the island in 1770, followed by the British and the French, but in 1888 it was taken over by Chile and is now administered by that country. 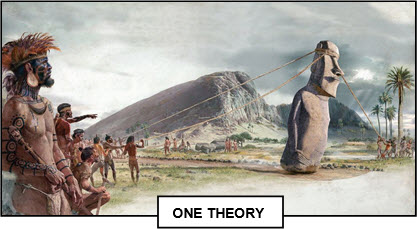 xxxxxIn subsequent scientific expeditions, the statues were found to be carved from soft volcanic rock - plentiful on the island - and most of them stand ten to twelve feet high, though there is one of 37 feet. Many remain unfinished, and there is an enormous one of 66 feet, lying in the quarry where the statues were made. They depict the human form from the waist upwards and all have huge heads and elongated ears and noses. Most are thought to date from the period 1000 to 1500 AD, and were at one time objects of veneration, possibly representing important personalities from the past. How these vast statues - some weighing up to 50 tons - were transported from the quarries and then raised upright remains something of a mystery. It is supposed that they were dragged along by hundreds of men pulling on long ropes, and then hauled upright inch by inch. The island also has a large network of underground caves, but as the natives lived in long, narrow huts, these were probably used for storing food and implements.

xxxxxDuring his voyage across the Pacific, Roggeveen also discovered the northern islands of the Society group, and a number of the Samoan islands.