xxxxxThe Czech Antonín Dvorák, a prolific composer, gained international fame with his lively Slavonic Rhapsodies and Dances of 1878 and 1886. Assisted in his career by the German composer Johannes Brahms, whom he met in 1873, he became the first Bohemian composer to gain worldwide recognition and, together with his countryman Bedrich Smetana, was a founder of Czech national music. He composed in all forms, but excelled in orchestral works and church and chamber music. His music, full of enchanting melody and largely based on the folk songs and dances of his homeland, proved highly patriotic at a time when there was a strong political movement for independence from Austrian rule. Today, however, he is particularly remembered for his New World Symphony, produced in 1893 during a three year visit to the United States, and containing themes from the melodies of the deep South and American-Indian music. Essentially, his music was in the classical tradition of Beethoven and Brahms, but his early work was also influenced by Richard Wagner. He paid a number of visits to England and, via his friendship with Pyotr Tchaikovsky, gave two concerts in Moscow. He was director of the New York National Conservatory of Music during his stay in America, and ended a successful career directing the Conservatory in Prague, a city in which he spent much of his life. 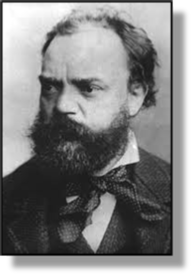 xxxxxThe Czech composer Antonín Dvorák gained international recognition with his two sets of infectious Slavonic Rhapsodies and Dances of 1878 and 1886. He became one of the most versatile and admired composers of his time. Much of his music - which included nine symphonies, choral works, and a wealth of chamber music - expresses his love for his homeland Bohemia, but he is especially remembered today for his New World Symphony (his ninth) of 1893, written in America, and including folk themes from that country’s deep south and American-Indian music. He was director of the New York National Conservatory of Music for three years, and ended a successful career directing the Prague Conservatory. Together with his fellow countryman Bedrich Smetana, he was a founder of Czech national music.

xxxxxDvorák was born at Nelahozeves, a Bohemian village just north of Prague, where his father was an inn-keeper and owned a butcher’s shop. He was likely destined to become an apprentice butcher, but as a lad he liked the popular peasant songs, was a keen member of the local church choir, and, taught by his schoolmaster, showed an exceptional ability as a violinist, playing at the inn and at dances and musical events in the village. In 1855 he was sent to the nearby town of Zlonice to take lessons in German and music, and such was his musical talent that two years later his teacher persuaded his father to send him to a school in Prague to study the organ and musical composition. An uncle met the cost, and it proved the beginning of his career as a composer, though he certainly didn’t realise it at the time.

xxxxxOn completion of the two-year course Dvorák returned home and made a living by playing the viola at various local functions, and taking on a few private pupils. Eventually he earned a place in the concert band of the local composer Karel Komzak. Meanwhile, in his spare time, he turned his hand to composing. By 1862 he had produced two symphonies, some chamber music and a number of songs, and it was in that year that he joined the orchestra of the Prague National Opera, playing the viola. There he was encouraged by the conductor Bedrich Smetana, a composer and fellow countryman whose music, reflecting his love for Bohemia, was to prove an inspiration. Over the next ten years he produced a varied selection of compositions - songs, overtures and chamber music -, including his Symphony Bells of Zlonice and his song cycle Cypresses. These won him favour, and by the early 1870s - now working as organist at St. Adalbert Church in Prague - a number of his works were being heard in concert in Prague. Then came the break-through. In 1873 one of these pieces, his patriotic cantata Hymnus, brought him public recognition, and the following year he was awarded the Austrian state prize for composition. One of the adjudicators for this award was the German composer Johannes Brahms (illustrated above). He befriended the young Bohemian composer, recommended him to his publisher Fritz Simrock, and enabled his music to be published and performed in Germany. 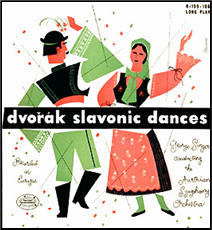 xxxxxWith the support and advice of his mentor Brahms, his music steadily gained popularity. His Moravian Duets for soprano and contralto, composed in 1876, were well received, and international fame came two years later with his vivacious Slavonic Rhapsodies and Dances. Taken straight from the music of his own country, these lively and expressive pieces were highly praised by the leading critics and musicians of the day. Fervently nationalistic, they captivated audiences at home, and spread Bohemian dance forms abroad, be it the polka, the fiery furiant or the dumka with its slow, melancholy passages. They were followed by a number of notable works, including Serenade for Wind Instruments, the first of his string quartets, his powerful sixth symphony, his Violin Concerto and his Scherzo Capriccioso, a selection of colourful “musical sweetmeats”.

xxxxxDvorák made his first visit to England in 1884 to conduct his moving Stabat Mater, (premiered in Prague in 1880). This work was well received, and in subsequent visits he conducted a number of works composed for the English, including his seventh symphony for the Philharmonic Society in 1885, the oratorio St. Ludmilla for the city of Leeds in 1886, and his Requiem Mass for Birmingham in 1890. And in 1890 he paid a triumphal visit to Moscow to attend two concerts arranged for him by his friend Pyotr Tchaikovsky. His visits to the United Kingdom added to his reputation in the United States, and in 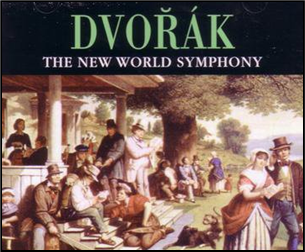 1892 he accepted an invitation to become the director of the newly established National Conservatory of Music, based in New York. He held this post for three years and spent some time in the Czech colony of Spillville in Iowa. It was while in America that he produced his now famous New World Symphony (his ninth) a work full of melody which captures in part the spiritual melodies of the deep South and the characteristic themes of American-Indian music. The first performance, held in Carnegie Hall, was a phenomenal success and marked the pinnacle of his career. Also to this period belongs his “American” String Quartet.

xxxxxDvorák returned to his beloved Bohemia in 1895, and his final years saw the completion of his Cello Concerto, his delightful piano cycle Humoresques, and a number of string quartets and symphonic poems. In 1901 he was appointed director of the Prague Conservatory, and in the same year the fairy tale Rusalka, the most successful of his ten operas, was staged at the Prague National Theatre. He spent much of his time on his country estate at Vysoka, bought in 1885, but died in Prague - the city where he had spent most of his life - in 1904. His funeral was a day of national mourning.

xxxxxEssentially, Dvorák’s music was in the classical tradition of Beethoven and Brahms, but his early works were also influenced by Richard Wagner, whom he met when playing in the orchestra of the Prague National Opera. His compositions had an inexhaustible supply of melodic wealth, and, based as they were on the tunes and rhythms of the folk songs and dances of his homeland, they expressed his love of Bohemia at the very time when there was a strong political desire for freedom from Austrian rule - not achieved, in fact, until fourteen years after his death. A prolific composer, he worked in all forms, and this makes his achievement the more remarkable. He is best known for his orchestral music, but much of his finest work is to found in his chamber music, notably his string quartets.

xxxxxAlong with his fellow countryman Bedrich Smetana, who also had a passionate love for his homeland, he helped to lay the foundations of the Czech nationalist movement in music. It was Smetana, 17 years his senior, who, as we have seen, founded that movement, but it was Dvorák, by the beauty and spontaneous freshness of his music, who popularised it. There are sad and serious moments to be found in his work, but in general his compositions are fresh and optimistic, and some are lively to say the least. And running through them all is the constant reminder of his great talent for rhythm and melody.

xxxxxDvorák came from humble, peasant stock, and despite the international fame he achieved, he remained a modest man of the people. He was devoted to his family, had a deep love of nature, and - perhaps a little surprisingly - had a real and knowledgeable interest in train engines. The first Bohemian composer to achieve worldwide recognition, his personality as well as his musical talent made him the idol of Prague. The famous German conductor of his time, Hans von Bulow, ranked him next to Brahms as the most gifted composer of the day. 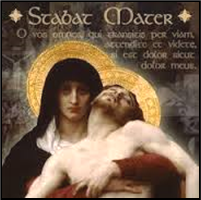 xxxxxIncidentally, his Stabat Mater was a particularly distressful piece for Dvorák personally. It was while working on this religious cantata that he lost all three of his then living children. His daughter Josefa died two days after birth in 1875, and both his 11-month daughter Ruzena and his 3-year old son Otakar died in 1877. The work was eventually given its first performance in Prague in December 1880. Based on an ancient Roman Catholic poem recording the anguish of the Virgin Mary at the crucifixion of her son, this hymn was also an outpouring of his own grief. The Dvoráks later went on to have a family of six children. ……

xxxxx…… The Slavonic Dances were originally written as piano duets. Soon after their composition however - at the request of his publisher - he orchestrated them, and this is the form in which they are popularly known today. ……

xxxxx…… Dvorák made two triumphant tours of the United States, and he gained much from them. “This country”, he commented, “is full of melody, original, sympathetic and varying in mood, colour and character to suit every phase of composition.” …… 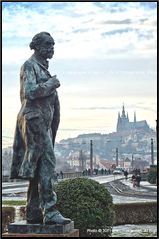 xxxxx…… In 1890 the University of Prague conferred upon him a Doctorate of Philosophy. In gratitude Dvorák dedicated his next work, his exuberant Carnival Overture, to the university. A carnival - from the medieval Italian meaning “farewell to meat” (“carne vale”) - was originally a festival for feasting and merrymaking, held before the onset of Lent - a period of fasting in the Christian calendar. ……

xxxxx…… This statue of Dvorák is in front of the Rudolfinum Music Hall in the centre of Prague, the city he loved and served so well.