xxxxxThe Englishman John Dryden was an accomplished dramatist and poet. His play The Indian Emperor made his name in 1665, and was followed by The Indian Queen, a part operatic work containing music by his contemporary Henry Purcell. As a restoration dramatist, many of his plays were coarse in humour, such as his Love in a Nunnery, Marriage à la Mode and All for Love, based on Shakespeare’s Antony and Cleopatra and often considered his finest work. But he also wrote heroic tragedies, and his State of Innocence of 1667 was a stage adaptation of John Milton’s Paradise Lost. Apart from his poem Annus Mirabilis, published in 1667, he wrote The Hind and the Panther - defending Roman Catholicism - and some brilliant satires about current political disputes. In 1668 his essay Of Dramatic Poesy contributed to his reputation as the father of English literary criticism. Later he turned to translation, such as The Works of Virgil, in order to make a living. The grandeur of his poetry did much improve the clarity of the English language. He was made Poet Laureate in 1668, the first official appointment, but lost the title in 1688. 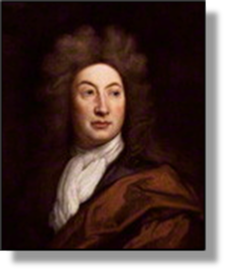 xxxxxThe Englishman John Dryden was an accomplished poet - noted particularly for his satirical verse - as well as being one of the most outstanding of the Restoration dramatists. He also gained a reputation for his literary criticism and translation work. He was born in Aldwinkle, Northamptonshire, and, after attending Westminster School and studying at Cambridge, he moved to London in 1657, working for the Commonwealth government. He wrote Heroic Stanzas to mark the death of Cromwell, and attended his funeral along with John Milton and Andrew Marvell, but the following year he turned royalist (or Tory) and published his Astraea Redux to celebrate the restoration of the monarchy, and then his Panegyric on the Coronation in 1661. Anxious as always to keep in favour at court, he converted to Roman Catholicism following the accession of James II, but this time lost out when the Glorious Revolution brought a Protestant to the throne three years later! 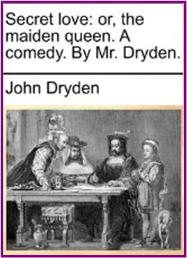 xxxxxHe produced his first successful play, The Rival Ladies, a tragicomedy in verse, in 1664, and followed this up a year later with The Indian Emperor, the work which made his name as a playwright and set him on a lucrative career for the next twenty years. The Indian Queen, part operatic, was written in collaboration with Sir Robert Howard, and contains music by the contemporary English composer Henry Purcell. As a restoration dramatist many of his plays were coarse in humour, and their plots were contrived to that end - an inevitable reaction to the closure of the theatres and the prudery of Puritanical rule during the days of the Commonwealth. It was now, as Dryden aptly put it, "tart and cheesecake time" Among such plays were Secret Love (a particular favourite of the king), An Evening's Love, and Love in a Nunnery. Indeed, so crude was one of these - The Kind Keeper - that it was banned as indecent! His comedy Marriage à la Mode of 1673 was particularly popular, and his All for Love, produced in blank verse five years later, was based on William Shakespeare's Antony and Cleopatra, and is considered by some as his finest work. In addition, however, Dryden also produced heroic tragedies set around major events of history and mythology, like his Conquest of Granada of 1672, and his Troilus and Cressida, six years later. The State of Innocence, first performed in 1667, was a stage adaptation of John Milton's Paradise Lost.

xxxxxAs a poet, his major critical essay of 1668, entitled Of Dramatic Poesy, was highly thought of, and it was this work - together with the essays which prefaced many of his plays - that earned him the reputation as the father of English literary criticism. These essays doubtless played a major part in his appointment as Poet Laureate in 1668 - the first to receive the title by letters-patent - a post which he lost, together with his pension, following the Glorious Revolution of 1688, and the return of a Protestant king. From that time onwards he struggled to survive. 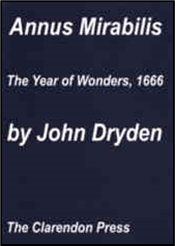 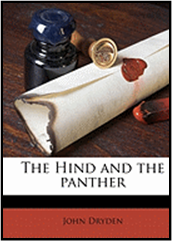 xxxxxApart from his Annus Mirabilis of 1667 (in praise of the year 1666), his poetic work included the allegorical poem The Hind and the Panther - a defence of Roman Catholicism - and A Song for St. Cecilia’s Day, set to music by Purcell. A later work, his parable Absalom and Achitophel, produced in 1681, was a brilliant satire on the current political dispute over Shaftsbury's Exclusion Bill. Here he used a biblical setting to attack with wit and delicate irony the Whig attempt to replace the Duke of York (the future King James II) by the king's illegitimate son, the duke of Monmouth. This was followed by a very personal attack upon Shaftsbury himself in his poem The Medal. Likewise his Mac Fleknoe, was a scathing assault on his literary opponent, the playwright and Whig propagandist Thomas Shadwell (c1642-1692). In these and his other works, the authority and grandeur of his verse prompted the 18th century writer Samuel Johnson to remark "Dryden found English poetry made of brick, and left it made of marble". But those who were the target of his biting wit were no so kindly disposed towards him! 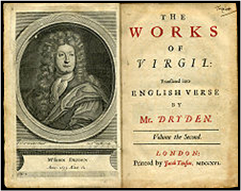 xxxxxIn later life he turned to translation in order to make a living. He translated The Works of Virgil, the Roman poet, and in his Fables Ancient and Modern, completed the year before his death, he produced verse adaptations of Homer, the Latin poet Ovid, the Italian poet Giovanni Boccaccio, and the English poet Geoffrey Chaucer. Also during this period he produced the Ode Alexander's Feast, another work set to music by Purcell.

xxxxxDryden was an early and active member of the Royal Society. He was elected in 1663 and from the start showed a determination to improve the order and clarity of the English language. He was the leading wit at the lively gatherings at Will’s Coffee House, and he so dominated the literary world during his career that this period is sometimes referred to as the "Age of Dryden", a term which, as we shall see, was later replaced by the "Augustan Age" to incorporate the works of such writers as William Congreve, Alexander Pope, Joseph Addison, and Jonathan Swift. Dryden, a man of many literary talents, died in May 1700, and was buried in Poets' Corner in Westminster Abbey. 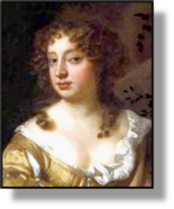 xxxxxIncidentally, the king's famous mistress, Nell Gwyn (1650-1687), whose first job was selling oranges outside Drury Lane Theatre, London, became an actress at the age of 15, making her debut in Dryden's The Indian Emperor. Charming, witty and vivacious, she was well suited for parts in Restoration comedies, and Dryden created a number of roles with her in mind. The portrait here is by the Dutch artist Peter Lely.

xxxxx…… Attributed to Dryden is the word "biography", first put on paper in 1683 when he was writing about Plutarch, and also the description of the poet Geoffrey Chaucer as "the father of English poetry".

xxxxxLike Dryden, the English dramatist William Wycherley (1640-1716) also excelled in restoration comedy. His ribald, highly witty and satirical comedies, much admired by the king, included Love in the Wood, The Country Wife, The Gentleman Dancing Master and The Plain Dealer. As we shall see (1693 W3), his work was to be followed by the polished, refined style of the English dramatist William Congreve. 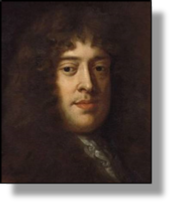 xxxxxDryden was a leading figure in Restoration Comedy, with some 30 tragedies, comedies and operatic-type works to his credit. Another who excelled in this genre was the English playwright William Wycherley (1640-1716). After leaving Oxford University, he enjoyed a life of pleasure, and won the king's favour with a series of ribald comedies. His first work, Love in the Wood, produced in 1671, was well received, and was followed by The Country Wife (scene illustrated below), The Gentleman Dancing Master, and The Plain Dealer.

xxxxxHis plays provided a feast of farce, course humour and witty dialogue, and his use of satire was particularly spiteful. His comic situations were sometimes used to criticise the follies and foibles of a fashionable society to which, in fact, he himself belonged. 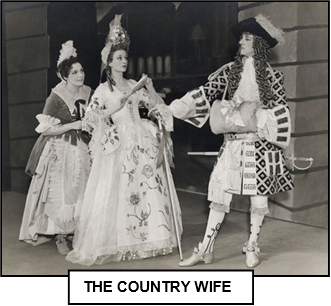 xxxxxAt the age of 40 he married a strict Puritan, the wealthy Countess of Drogheda, who, so we are told, was terminally ill at the time. When she died a year later, therefore, her will was contested and he became involved in a lengthy and expensive legal wrangle. He eventually ended up in a debtors' prison for seven years, and would have been there much longer had James II not paid off most of his debts and granted him a pension. Wycherley died in 1716, but long before his death, as we shall see (1693 W3), the English dramatist William Congreve was writing plays which, by their polished style and delicacy of feeling, compared favourably with any that he or, indeed, Dryden had produced.

xxxxxSamuel Butler (1612-80) was another poet and satirist at this time. His fame rests almost entirely on his mock-heroic poem Hudibras. This work, poking fun at the extreme Puritan, proved immensely popular in the restoration period. Published in three parts, starting in 1663, it was centred around the bizarre adventures of a Presbyterian knight and his squire Ralpo - clearly inspired by the novel Don Quixote by Miguel de Cervantes. Another work, The Elephant in the Moon, ridiculed the dogmatism often shown by members of the newly formed Royal Society. Although his writing was admired by the king, he received no financial reward and died a poor man. His satire had a strong influence on the Irish writer Jonathan Swift, author of Gulliver’s Travels in 1726 (G1). 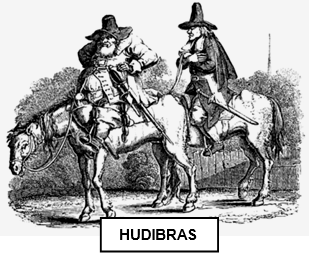 xxxxxAnother English poet and satirist at this time was Samuel Butler (1612-1680), whose fame rests almost entirely on his long mock-heroic poem entitled Hudibras. This work, poking fun as it did at the extreme Puritan - be it his bigotry, pedantry, selfishness or hypocrisy - proved immensely popular in the restoration period, and was particularly appreciated by the king. Published in three parts (1663, 1664 and 1678), it was centred around the bizarre adventures of the hero, a Presbyterian knight, and his squire Ralpho, and was clearly inspired by the novel Don Quixote, the work of the Spanish writer Miguel de Cervantes. 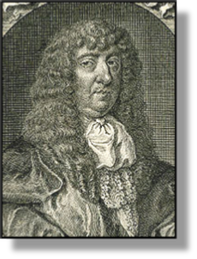 xxxxxButler was born near Pershore in Worcestershire, the son of a farmer. He was educated at King's School, Worcester, and after serving as a page for the Countess of Kent, joined the household of Sir Samuel Luke, a Presbyterian colonel in the Parliamentary army. Here he met a large number of Puritans attached to the military, and these doubtless provided him with material for his masterly verse satire. At the restoration of the monarchy he served for a while as steward of Ludlow Castle in Shropshire, and it was at this time that he started writing what is today regarded as one of the best burlesque poems in English literature. Also worthy of mention is a work published in 1676 which holds up to ridicule the dogmatism often shown by members of the newly founded Royal Society. It tells of a tale of research in which a mouse, trapped in a telescope, is taken to be (as the title has it) The Elephant in the Moon. Such satirical writing had a strong influence on the Irish writer Jonathan Swift, author of Gulliver's Travels in 1726 (G1).

xxxxxThe latter part of his life was spent in the household of George Villiers, the 2nd Duke of Buckingham. Despite the king's undoubted liking for his work and, so we are told, the promise that he would be considerably rewarded for it, no financial assistance ever came his way, and he died a poor and disappointed man. In 1759, close to a century after his death, two volumes of his satirical works were published under the title Genuine Remains in Verse and Prose of Mr. Samuel Butler.

xxxxxIncidentally, Hudibras contains a number of expressions which, over the years, have become well-known phrases, like "looking a gift-horse in the mouth".