xxxxxThe real Richard Whittington earned his living as a London cloth merchant. He was elected lord mayor of the city in 1397, 1406 and 1419. He amassed a vast fortune and advanced money to both Henry IV and Henry V. He left most of his money to charity, some being used for the rebuilding of Newgate Prison. In fact, he had very little in common with the legendary figure, Dick Whittington. He was a poor orphan who, deciding to leave London, was enticed back by the bells of Bow and, as they predicted, became Lord Mayor. He made his fortune by way of his cat who, having been put aboard a boat for North Africa, earned a large sum by scaring off a plague of rats in Barbary. It is not clear how Richard became connected with Dick, but the first reference to the tale appeared in 1605.

xxxxxRichard Whittington was probably born in Gloucester, the son of a knight. He earned his living in London as a cloth merchant and in 1393 was made an alderman of the city. He was elected Lord Mayor of London in 1397, and then again in 1406 and 1419. He amassed a fortune in his business and later advanced large sums to both Henry IV and Henry V. Upon his death he left most of his money to charity, some of it being used for rebuilding Newgate Prison and repairing St. Bartholomew’s Hospital.

xxxxxIt is not clear how he became connected with the legendary Dick Whittington, because, in fact, they have very little in common. According to the legend, Dick was a young orphan lad who, together with his cat, went to London to seek his fortune. He could only find work as a dish-washer, so he gave his cat over to a ship bound for North Africa, and started to walk out of London. Just outside the city, however, he heard the bells of Saint Mary-le-Bow and they seemed to be saying: “Turn again, Whittington, Lord Mayor of London”. He took their advice and discovered that his cat had made him a fortune, having been sold for a large sum in Barbary in order to rid the region of a plague of rats. He settled in London, was eventually elected Lord Mayor, and lived happily ever after. The first reference to the tale appeared in 1605. 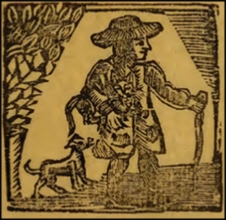 xxxxxIncidentally, tradition has it that anyone born within the sound of “Bow Bells”, the bells of St. Mary-le-Bow in the City, is a true London “Cockney”. The church was badly damaged during the Second World War, but the bells were recast from the old metal and restored in 1961. ……

xxxxx…… To this day an ancient milestone on Highgate Hill, London, is preserved as the one on which Dick Whittington was said to be resting when he heard the “Bow Bells” calling him back.

Whittington: from the title page of The Famous and Remarkable History of Sir Richard Whittington, Three Times Lord-Mayor of London, produced in 1770 by the English printers Thomas Fleet (1732-1797) and John Fleet (1734-1806) – Boston Public Library, Massachusetts, USA.