xxxxxAs we have seen, the death of Emperor Charles VI in 1740, and the succession of his daughter Maria Theresa, opened up a power struggle in Europe. Sensing the collapse of the Habsburgs, Prussia seized Silesia, and the following year a Franco-Bavarian force invaded Austria and Bohemia. All seemed lost for Austria's new ruler, but Maria Theresa stood firm and then, going onto the offensive, drove the French and Bavarians out of her lands. Meanwhile, in 1743 an army of Austrian, British and Hanovarians, led by George II, met up with the French at the Bavarian village of Dettingen. The French had a larger force, and held a good defensive position, but their commander chose to attack. The assault was repulsed, and a counter attack put the French infantry to flight. By now, however, the Prussians had re-entered the war. While their king, Frederick II, waged a successful campaign, the French, as we shall see, were to take their revenge for Dettingen at the Battle of Fontenoy in 1745.

THE WAR OF THE AUSTRIAN SUCCESSION

xxxxxAs we have seen, the War of the Austrian Succession broke out following the death of the Emperor, Charles VI, and the succession of his eldest daughter Marie Theresa in 1740. Sensing the collapse of imperial power, Frederick II of Prussia overran Silesia, and this victory signalled a general assault upon the Habsburg Empire. Spain, Bavaria, Saxony, France and Sardinia joined in a coalition against Austria, and in 1741 a Franco-Bavarian force occupied northern Austria and invaded Bohemia. All seemed lost, but Marie Theresa stood firm. Then, having gained the support of Britain and Holland, she went on the offensive, driving the French and Bavarians out of her lands and invading Bavaria. 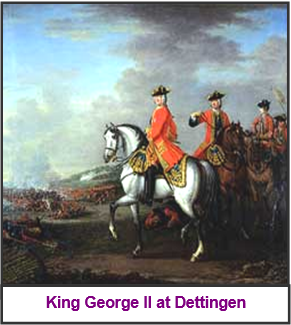 xxxxxIt was as part of that campaign that, in June 1743, a combined force of 42,000 British, Austrian and Hanoverian troops, led by George II, confronted the French at the Bavarian village of Dettingen. The French, under the command of Adrien-Maurice, Duc de Noailles, and numbering about 50,000 men, held a commanding position. Their front was protected by an area of boggy ground, and they held the bridges on the river to their rear. But instead of waiting for the enemy to attack, the Duc de Noailles ordered his cavalry to charge against the British infantry. After an initial break through, the charge was repulsed, and King George led his cavalry in a counter charge. The French line broke and large numbers of their infantry perished, cut down by the advancing cavalry or by plunging into the river.

xxxxxThe Battle of Dettingen was a decisive victory for Austria and her allies, but by this time the powerful forces of Prussia had returned to the attack in what came to be known as the Second Silesian War. In a two-year campaign (1744-5) Frederick II won a string of victories against the Austrians and, as we shall see, these victories, together with the French triumph at the Battle of Fontenoy in 1745, was to bring Marie Theresa to the n

xxxxxIncidentally, taking part in the fighting at Dettingen - the last battle in which a British monarch led his troops in the field - was the Duke of Cumberland (later to be nicknamed "Butcher Cumberland" for his brutal treatment of the Jacobite rebels of 1745) (illustrated), and the soldier James Wolfe, victor of the Battle of Quebec in 1759.

xxxxxIt was in 1740, during the War of Jenkins’ Ear, that the British Commodore George Anson (1697-1762) set sail on his eventful voyage around the world. He lost five of his six vessels and, with his men, suffered great hardships, but, having captured a Spanish treasure ship in the Pacific, he returned home in 1744 with an enormous amount of booty. He fought in the War of the Austrian Succession, defeating the French off Cape Finisterre and later, as first lord of the Admiralty, he did much to prepare the navy for its successful role in the Seven Years War. He is best remembered today, however, for his account of his epic journey, published as Voyage Around the World in 1748. 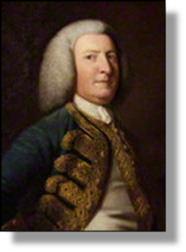 xxxxxThe British victory on land was matched at sea by the exploits of Commodore George Anson (1697-1762). As we have seen, Britain was in conflict with Spain as early as 1739 following the outbreak of the so-called War of Jenkins’ Ear. As a contribution to the war effort, in 1740 Anson set sail with six vessels to seek out and capture Spanish treasure ships in the Pacific. It proved a somewhat arduous voyage. Three of his vessels were destroyed while rounding Cape Horn and, after raiding Spanish mining settlements in Chile, he was down to one, the Centurion. He and his crew then crossed the Pacific, suffering terrible hardships en route, but were rewarded with the capture of a large Spanish treasure galleon just off the coast of the Philippines. He sold his spoil in Canton, China, for some £500,000 - a surprising achievement in itself - and then returned home after a trip around the world lasting three years and nine months.

xxxxxAnson was made a rear admiral on his return and, four years later, after defeating a powerful French fleet off Cape Finisterre - during the closing stages of the War of the Austrian Succession - he was created a baron. He became first lord of the Admiralty in 1751, and the reforms he introduced during his two terms of office contributed greatly to the efficiency and success of the British fleet during the Seven Years' War (1756-1763). He greatly expanded the size of the Navy, improved the conditions of service for both officers and me 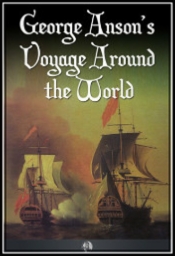 n, and streamlined the structure of command. He also introduced the blue uniform for the commissioned officer, and was responsible for having the Marines transferred to naval command. William Pitt the Elder, speaking in the House of Lords in 1770, declared that the naval successes of the Seven Years War were due to “his wisdom, his experience, and his care”.

xxxxxToday, however, Anson is best remembered for his account of his epic journey, published as Voyage Around the World in 1748. Within a year of its publication this story of hardship and courage had been translated into seven European languages.