xxxxxFollowing the sudden death of the Russian Tsar, Alexander I, in December 1825, a group of young army officers, influenced by the liberal ideas current in Western Europe, attempted to prevent the accession of Nicholas I in favour of his brother Constantine. The revolt, however, was poorly organised and divided in its aims. Some of the leaders sought a constitutional monarchy, whilst others favoured various levels of representative government. The major uprising of the so-called Decembrists took place in St. Petersburg. Three regiments refused to pledge their loyalty to the new Tsar and were attacked by loyalist troops. The revolt was quickly crushed. Five rebels were executed, some thirty imprisoned, and more than 250 banished to Siberia. Such was the grip held upon the reins of government by the Romanov dynasty that it was not until 1905 that the next major attempt at revolution took place. 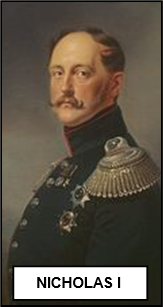 xxxxxThe sudden death of Tsar Alexander I in December 1825 sparked off the first major rebellion against the Romanov dynasty. An attempt was made to overthrow the new Tsar, Nicholas I (1796-1855), by a group of young officers seeking political reform. In many respects this insurrection came as no surprise. Quite apart from the autocratic rule of Alexander - which had become more stringent during the latter years of his reign - the French Revolution and the Napoleonic Wars had brought many Russians - and particularly members of the army - into contact with the more liberal régimes of Western Europe. Furthermore, the resounding victory of the Russians over Napoleon had aroused a patriotic feeling amongst the mass of the people, and there were young men among the educated classes who thought it possible to harness this new sense of national identity in support of their ideas of political reform.

xxxxxUnfortunately, the Decembrists, as they came to be called, had no clear aim and thus no decisive leadership. Made up, in the main, of disenchanted young army officers, many belonging to Russian secret societies bent on different levels of reform, they were divided both in their objectives and in the strength of their commitment. Some, taking advantage of the confusion which followed the sudden death of Alexander, sought to put his brother Constantine on the throne as a constitutional monarch; others favoured varying levels of representative government; and a minority called for a full-scale revolution and the abolition of serfdom 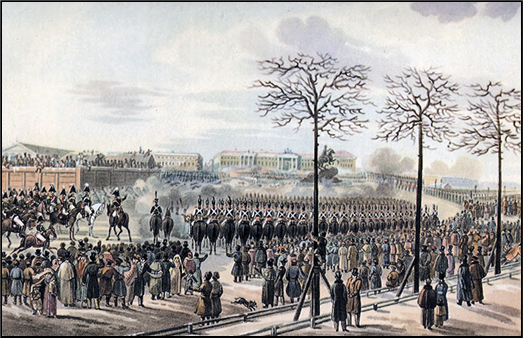 xxxxxThe major protest broke out in Senate Square in St. Petersburg on December 26th. Here, persuaded by members of the Northern Society, a leading dissident group, three regiments refused to pledge their loyalty to Nicholas I and demanded the accession of his older brother Constantine - unaware that he had secretly declined the throne in favour of Nicholas. The new Tsar acted decisively. The troops were fired upon by loyalist forces and about 80 soldiers and civilian onlookers were killed, and many more wounded. As a result, the rebellion broke up in disorder. After an extensive inquiry in which Nicholas himself took part, 289 Decembrists were put on trail. Eventually, five were hanged, 31 were imprisoned, and the remainder were banished to Siberia.

xxxxxIn fact, this poorly organised act of defiance was doomed to failure from the start. Such was the grip that the Tsars had upon their régime, that it was to take close on a century before sufficient force could be mustered to topple the dynasty from power. Indeed, the events of December 1825 served to make matters worse for those seeking even a modicum of reform. Nicholas, having been obliged to seize his throne by a show of force, now turned to more repressive measures - not that he wanted much persuasion in that direction. Strongly opposed to liberal reform (and more so after the revolutions of 1848), he established a secret police department in order to enforce total obedience to his authority, and imposed a strict censorship on all publications.

xxxxxFuture Russian revolutionaries came to regard the Decembrists as martyrs to their cause, and that is exactly what they were. Popular discontent continued and terrorist movements became increasingly more active, but it was not until 1905, in the reign of Edward VII, that a rebellion of any size or consequence broke out. By then, strikes and riots among the industrial workers, and mutinies within the armed forces made possible a revolution which held out some hope of success. 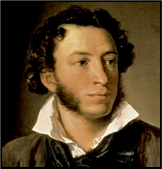 subzero weather conditions. After the killings, it is said that the blood stains were covered over with new snow, and that both the dead and wounded were dumped through holes made in the ice which covered the Neva River. ……

xxxxx…… The Russian poet, novelist and dramatist Aleksandr Pushkin, whilst taking no active part in the uprising, was in favour of social and political reform and wrote a number of poems in support of the rebellion’s ideals and aims.