xxxxxThe English ironmaster Abraham Darby discovered a cheaper method for smelting iron in 1709. He purified coal by heating it in brick ovens, and then used the resulting coke to fuel the iron smelting furnaces. This innovation gave a massive boost to the country’s manufacturing industry at the very time when Thomas Newcomen’s steam engine was about to produce a vast new market for iron. His son, Abraham, made over 100 Newcomen cylinders and, as we shall see, his grandson, Abraham Darby III, constructed the world’s first cast-iron bridge in 1779 (G3a).

xxxxxThe Englishman Abraham Darby was born near Dudley in xxxxxx Worcestershire. Soon after training as an engineer he set up his own business in 1698 at the age of 21 and, four years later, employed a number of Dutch brass founders, first at his works at Bristol - where he established his Bristol Iron Company - and then later at Coalbrookdale in Shropshire where low-sulphur coal was readily available. 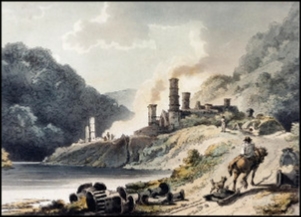 xxxxxIn those days furnaces used charcoal for the smelting of iron, but with the growing scarcity of wood this method was becoming progressively expensive. In 1709 Darby discovered an alternative and cheaper process. By a series of experiments he found a way of purifying coal by heating it in brick ovens and then using the resulting "coke" to fuel the iron smelting furnaces. The substitution of coke for charcoal also made possible the use of much larger blast furnaces, and this reduced further the cost of production. Such a revolutionary innovation gave a massive impetus to the country's manufacturing industry at the very time when the invention of the steam engine by Thomas Newcomen was about to create a vast new market for iron.

xxxxxIn the meantime, Darby found it possible to manufacture thinner castings in the making of domestic pots and utensils, and these compared favourably with the more expensive versions in brass. And such skills in the manufacture of iron were not lost on future generations. His son, Abraham Darby made over one hundred Newcomen cylinders, and, as we shall see, in 1779 (G3a) his grandson, also an Abraham Darby (III), constructed the world's first cast-iron bridge. The Darby family played no small part in the early days of the Industrial Revolution.