xxxxxAs we have seen, it was the French inventor Joseph Niépce who, in 1827 (G4), produced the first permanent photograph - a blurred image of his back courtyard. The exposure time required, however, was up to eight hours or more, and it was in an attempt to reduce this time that he went into partnership with Louis J.M. Daguerre, a Parisian painter. In 1839 Daguerre managed to cut this time considerably by a single-image process which used plates coated with iodized silver. He sold the idea to the French government that year, and his prints or “daguerreotypes” were soon being produced across Europe and North America. And when the Hungarian mathematician Jozsef Miska Petzval invented his improved lens in 1841, cutting the exposure time to well below a minute, photography became a flourishing business, especially in the United States. As we shall see, his method was eventually superseded by the negative/positive process invented by the English chemist William Henry Fox Talbot. Known as calotype or talbotype, this was able to produce a number of prints from a single negative. 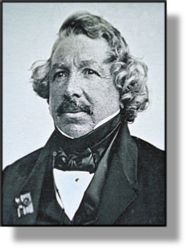 xxxxxAs we have seen, it was the French inventor Joseph Niépce who, in 1827 (G4), produced the world’s first permanent photograph taken from nature - a blurred black and white image of the courtyard at the back of his house. This was a remarkable achievement, but there remained the problem of the very long exposure time needed to produce the photograph, a matter of eight hours or more. It was because of his failure to reduce that time, either by chemical or optical means, that in 1829 he decided to go into partnership with Louis J.M. Daguerre, a Parisian painter and printmaker (illustrated), who was fascinated by the idea of photography, and very keen to develop this new art form.

xxxxxNiépce never lived to see any significant reduction in the exposure time, but Daguerre, using his partner’s materials and literally stumbling by chance upon the solution, succeeded where he had failed. By 1838 he had reduced the exposure time considerably by means of a single-image process which used copper plates coated with silver nitrate. In January the following year, 1839, a detailed account of this new method was given to the Académie des Sciences by the French physicist François Arago, and in August of that year Daguerre made the method public, naming it the “daguerreotype process”. Such was the response to this invention that within a matter of months Daguerre and Niépce’s son Isidore were able to sell the process to the French government in return for generous government pensions. 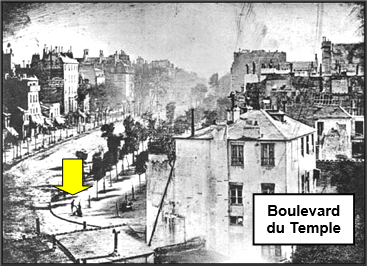 xxxxxThe Daguerre process spread rapidly - it reached the United States just four weeks after being launched - and soon “daguerreotypes” of famous landmarks in Europe and North America were being produced in large numbers. Atxfirst the exposure time could be as much as an hour - making portraits impractical - but with the improvement of lenses, notably by the Hungarian mathematician Jozsef Miska Petzval (1807-1891) in 1841, exposure time in ideal lighting conditions could be as little as 20 to 40 seconds. From then on the production of daguerreotypes became a flourishing industry, particularly

in the United States, where studios and galleries were set up in the major cities, and travelling photographers roamed the country in specially fitted-out wagons. The daguerreotype illustrated here is by Daguerre himself, produced in 1839. The picture of a boulevard, it shows (inset) the outline of a man having his shoes polished. He was probably the first person ever to appear on a photograph!

xxxxxDaguerre added to his fortune in 1839 by the publication of a best-seller, the instruction manual entitled An Historical and Descriptive Account of the Various Processes of the Daguerreotype and the Diorama. As we shall see below, his method was eventually superseded by the negative/positive process, sometimes known as calotype or talbotype. Invented by the English chemist William Henry Fox Talbot, this was able to produce a number of prints from a single negative.

xxxxxIncidentally, in 1840, using the daguerreotype process, the American astronomer John Draper (1811-1882) took the first photograph of the moon which showed any features. Meanwhile the French physicist Armand Fizeau (1819-1896), the first man to measure the speed of light on the Earth’s surface (achieved in 1849), began to take an interest in photography. In collaboration with his fellow scientist and countryman, Léon Foucault (1819-1868), he also adapted the daguerreotype technique for use in astronomy, and in 1845 took the first detailed pictures of the Sun’s surface. Six years later Foucault, by a series of experiments, gained fame by proving that the Earth rotates about its axis. He received the Copley Medal from the Royal Society in 1855, and was appointed physicist at the Imperial Observatory in Paris.

xxxxxThe English chemist William Henry Fox Talbot (1800-1877) became interested in photography in the early 1830s, and in 1835 succeeded in producing an image of a lattice window at Lacock Abbey, his home in Wiltshire. Like Daguerre he experimented with the use of sensitized paper, and made public his method, known as “calotype” eight months before the Frenchman published his findings in 1839. This process, the first negative/positive method, was superior to daguerreotype because it enabled multiple prints to be made from a single negative, a major feature of modern photographic processing. He later improved the quality of his prints by using printable steel plates and muslin screens as part of the printing process. In 1846 he published The Pencil of Nature, the first book to contain original photographs. Apart from his outstanding contribution to the development of photography, Talbot also wrote on mathematics, physics and astronomy, and as a classical scholar he played a part in deciphering cuneiform inscriptions from the ancient city of Nineveh in Assyria. 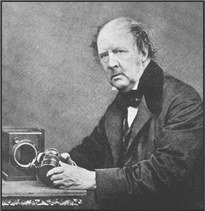 xxxxxThe English chemist William Henry Fox Talbot (1800-1877) came up with a similar method to the daguerreotype at almost the same time as its French inventor, and, in fact, managed to make known his results in January 1839, eight months before Daguerre went public. Born in Melbury, Dorset, and educated at Harrow and Trinity College, Cambridge, he first became interested in photography while on holiday at Lake

Como, Italy, in the early 1830s. He tried to record images studied through a camera obscura and a camera lucida, and, on his return, he succeeded in producing an image of a lattice window (illustrated) at his home, Lacock Abbey in Wiltshire, in 1835. Produced by using sensitized paper, it is the earliest known surviving negative on paper.

xxxxxBy 1841 Talbot had much improved his use of light-sensitive paper in his developing technique, and it was in that year that he patented his calotype process (“calotype” coming from the Greek for beautiful), the very first negative/positive method. This refinement, which enabled multiple prints to be made from a single negative, was a decided advance on the daguerreotype, and marked the beginning of the modern photographic process. Not surprisingly, it earned him a medal from the British Royal Society. 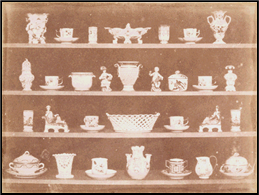 xxxxxIn 1843 he produced a photographic enlarger and then three years later completed the publication of his The Pencil of Nature, the first published work containing original photographs. Published in six installments, its 24 plates illustrated the very beginnings of photography seen through pictures of design and architecture. Illustrated here is one of the plates, entitled Articles in China. Then later, in the 1850s, he improved the definition of his images further by using printable steel plates and muslin screens as part of the printing process.

xxxxxThe two Frenchmen Joseph Niépce and Louis Daguerre can rightly claim to have played a fundamental part in the invention of photography, but Talbot’s pioneer work, particularly in 1830s and 1840s, also made a vital contribution to this new art form, and anticipated the lines upon which it was to develop. Indeed, some would argue that he was justified to a large extent when he later wrote:

I do not profess to have perfected an art, but to have commenced

one, the limits of which it is not possible at present exactly to ascertain.

I only claim to have based this art on a secure foundation.

xxxxxIndeed, it was on this secure foundation that the American inventor George Eastman was to build, and on a grand scale. As we shall see, his famous handheld “Kodak” camera, produced in 1888 (Vc), was to bring photography to the masses at the “press of a button”.

xxxxxIncidentally, Talbot was a talented man in other disciplines. He published a number of works on mathematics, physics and astronomy, and he was among the first of the classical scholars to decipher the cuneiform inscriptions then coming to light during the discovery of the ancient city of Nineveh in Assyria. A museum dedicated to his work was opened at Lacock Abbey in 1975. ……

xxxxx…… The camera lucida, which Talbot used during his holiday in Italy and which awakened his interest in photography, was invented by the English chemist William Hyde Wollaston in 1807. It was an optical instrument which helped the artist to make a more accurate tracing of a particular object. It was while viewing pictures through this instrument (and the camera obscura) that, as Talbot later wrote, “the idea occurred to me - how charming it would be if it were possible to cause these natural images to imprint themselves durably and remain fixed upon the paper." …… 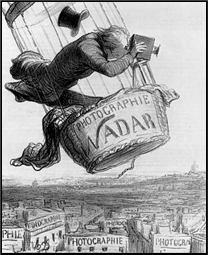 xxxxx…… As we have seen, the astronomer John Herschel, son of the famous astronomer Sir William Herschel, and close friend of the inventor Charles Babbage (1833 W4), was also keen on photography, a word he himself coined, together with the terms negative and positive. In 1839 his own research convinced him of the value of sensitized paper in the developing process. ……

xxxxx…… Thexfirst aerial photograph was taken in 1858 by Nadar (1820-1910), the adopted name of the French portrait photographer and ca 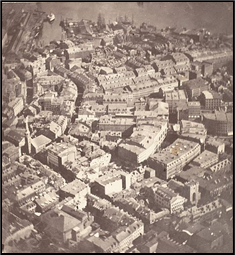 ricaturist Félix Tournachon. He took the photograph from his own huge balloon named The Giant, and it was this balloon that inspired the French science-fiction writer Jules Verne to write Five Weeks in a Balloon. And Nadar himself was the inspiration for one of the characters in Verne’s From Earth to the Moon. The illustration above is by the French caricature artist Honoré Daumier in 1862. ……

xxxxx…… ButxNadar’s early photographs from the air were lost, so the oldest extant aerial photograph is a view of Boston (illustrated), taken by the American photographer James Wallace Black (1825-1896) from a tethered balloon in 1860.