xxxxxThe French writer Savinien Cyrano de Bergerac is best known for his prose fantasies the Comical History of the States and Empires of the Moon, published after his death in 1656, and a similar history of the Sun, six years later. The earliest examples of science fiction, these satires were meant to be humorous, but they also served to cut man down to size. Among other works was his The Pedant Imitated, a comedy of 1654, later used by Molière as part of his play The Cheats of Scapin. He is also remembered for the quality of his letters and his powerful criticism of The Fronde. Today, his name is known as the title of a play by the French writer Edmond Rostand, first performed in 1897 (Vc). Possessed as Cyrano was of a rather large nose, Rostand weaves a work of both comedy and pathos around Cyrano’s emotional traumas in his efforts to declare his love for the attractive Roxane.

Bergerac: after the French engraver Zacharie Heince (1611-1699) – National Library of France, Paris. Rostand: detail, from The Critic: An Illustrated Monthly Review of Literature, Art and Life, published in 1901, photographer unknown. 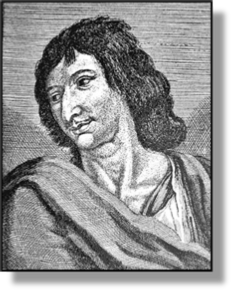 xxxxxThe French writer Savinien Cyrano de Bergerac, endowed with a large nose but, so it would seem, a heart to match, joined the corps of guards at the age of 19 and showed a great deal of courage before being wounded at the Siege of Arras in 1640. He left the army the following year and studied under the philosopher, scientist and mathematician Pierre Gassendi. It was during this period that he wrote the two satirical works by which he is best known, the Comical History of the States and Empires of the Moon, published posthumously in 1656, and a similar history of the Sun, published six years later. These prose fantasies - some of the earliest examples of science fiction - were later combined and translated in 1687 under the title Journeys to the Moon and Sun (illustrated below). 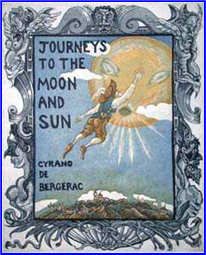 xxxxxIn such fantasies he was likely influenced by the two earlier works about the moon, written by the English clergymen Francis Godwin - The Man in the Moone - and John Wilkins - Discovery of a World in the Moone -, both published in 1638 (1662 C2). But whilst these imaginary journeys into space were clearly intended to be humorous, they also had a serious side to them, aimed as they were at poking fun at the contemporary belief, both religious and scientific, that humans were the very centre of creation. He saw the need to cut man down to size. And true to all works of science fiction, these stories anticipate a number of scientific developments, including the sound recorder and the atomic structure of matter!

xxxxxApart from these far-fetched, satirical comedies his plays included a classical tragedy, The Death of Agrippine - regarded by the church as blasphemous - and the comedy The Pedant Imitated, both published in 1654. The latter, a lively work which borders on the obscene, was admired by the French playwright Molière and he used it as a basis for part of his play The Cheats of Scapin, a comedy in which the central figure, Scapin, wears a large hooked nose. Cyrano's letters mark him out as a master of baroque prose, and he is remembered as a political commentator for his vitriolic pamphlet attacking the men of The Fronde. 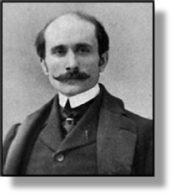 xxxxxBut for most people, the name Cyrano de Bergerac conjures up the romantic hero of a romantic play of that name, produced by the French writer Edmond Rostand (illustrated), and first performed in Paris in 1897 (Vc). Based loosely on the 17th century satirist - who, it would appear, was a great one for getting into scrapes - it tells of the emotional trauma 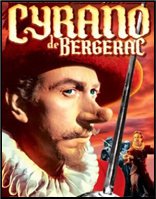 s suffered by Cyrano. Despite being a chivalrous, witty man of many manly and refined talents, he is convinced that he will never win the affection of the lovely Roxane, the woman he loves, because of his embarrassingly large nose. Only at the point of death does the gallant Cyrano confess his love! The play, a skilful blend of comedy and pathos, proved a great success, not only in France, but in other European countries and the United States. It has since been adapted for both film and television.