xxxxxAs we have seen, having landed in Scotland in July 1745 and mustered a sizeable force, the Young Pretender invaded England in the November. He reached Derby, but lack of support forced him to retreat back to the Highlands by the end of the year. Here in April 1746 his force of some 5,000 men joined battle with a much larger army of Redcoats on Culloden Moor, close to Inverness. The Jacobites, made up of Scots, Irish and French, were no match for the disciplined soldiers of the crown, led by the Duke of Cumberland. They were routed within 40 minutes, and a thousand lost their lives. The young prince managed to escape to France, helped in part by Flora MacDonald. She took him to Skye, disguised as a spinning maid. In the meantime the Highlanders were savagely treated. Many were tracked down and executed, and harsh laws were passed against them to reduce the power of the clan chiefs. The Jacobite cause was lost, kept alive only in legend, ballad and romantic literature.

xxxxxAs we have seen, having landed in Scotland in July 1745, Charles Edward Stuart, son of the Old Pretender, had rallied a large number of his countrymen to his cause - mostly Highlanders. The aim was to overthrow the Hanovarian dynasty in favour of his father, dubbed James III. After taking Edinburgh and winning the Battle of Prestonpans, he invaded England in the November and, with a force of some 5,500 men, reached as far south as Derby. Finding, however, that English support was meagre, and that the French, despite their promises, were not coming to his aid, it was at this point that he turned back and made for the Highlands. It was there that a British army, led by the Duke of Cumberland, met up with his motley force, just six miles east of Inverness in April 1746. 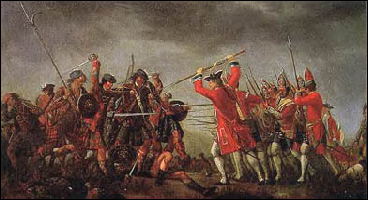 xxxxxAt the Battle of Culloden Moor the Jacobite force of some 5,000 men was heavily outnumbered by the Redcoats, and the fighting quality of the two sides was equally at odds. The English army was a trained and disciplined force, whereas the Jacobites, whilst totally committed to their cause, were not drilled in the art of fighting. Co-ordinated firepower won the day. The English opened with a volley of musketry. The Jacobites, a fairly undisciplined force made up of Scots, French and Irish, then charged forward but, having broken through the enemy's first line, were met with a volley of musket fire from the second line. Those who survived fled in confusion, and hundreds were cut down by the English cavalry, hot in pursuit. Not surprisingly, the battle only lasted 40 minutes. In that time it is estimated that 1000 Jacobites were killed, compared with some 50 Redcoats. A further 1,000 were either killed or captured in the weeks that followed, hunted down by the government forces.

xxxxxItxis hardly surprising that the Duke of Cumberland, third son of George II, should earn the title of "butcher", not only for the battle itself, but for the brutal repression of the Highlanders in the years that followed. In contrast, on his return to England, the great George Frederick Handel composed "See the Conquering Hero Come" in his honour, and a flower, the Sweet William, was named after him - but becoming known as "Stinking Willie" or "Sour Billy" north of the border!

xxxxxThis battle, the last major engagement to be fought on British soil, put an end to the Jacobite cause. Bonnie Prince Charlie managed to escape the carnage, and his exploits after the battle have been duly romanticised over the years - and understandably so - but, in fact, his plight was a desperate one. With a price of £30,000 on his head, he wandered through the Highlands for some five months, relentlessly pursued by the British army and a bevy of spies. He was never betrayed by his Highlanders, however, and it was thanks to a small band of loyal supporters, which included a young woman named Flora MacDonald, that he was able to escape to France in the September. It has been suggested that he paid secret visits to England in 1750 and 1754. Be that as it may, his cause was a lost one. He was later expelled from France, and, after some travelling, he eventually settled in Italy. It was here, calling himself the Count of Albany and drinking to excess, that he died in Rome in January 1788.

xxxxxRomantic notions aside, Charlie's escape from Scotland in 1746 might not have been possible without the assistance of Flora MacDonald (1722-90). She was the daughter of Ranald MacDonald, a farmer on the island of South Uist in the Hebrides. The Young Pretender, following his defeat at Culloden, took refuge in the Hebrides, and it was here that he met Flora. In order to help his escape, she allowed him to join her party, disguised as an Irish spinning maid with the name of Betty Burke. By this means he was able to make his way to the island of Skye.

xxxxxOn Skye they parted company, but the English got to hear of her part in the escape. She was imprisoned in the Tower of London, but was pardoned the following year. She married three years later, and in 1774 she and her husband emigrated to North Carolina. They eventually returned to Skye, and it was there, at Kingsburgh, that she died, aged 68. The English man of letters Samuel Johnson met her during his visit to Scotland in 1773, and described her as a courageous woman “of soft features, elegant manners and gentle presence.” Like Bonnie Prince Charlie himself, she has become the subject of many romantic ballads and legends.

xxxxxIn the aftermath of the Forty-five, nearly 1000 rebels were condemned to death, including a number of nobles. In addition, in order to integrate Scotland - and especially the Highlands - more fully into the rest of the kingdom, laws were passed. Certain statutes required oaths of allegiance to the Hanovarian dynasty, whilst the Abolition of Heritable Jurisdiction (Scotland) Act of 1747, for example, stripped the clan chieftains of their military and judicial powers over their members. Estates of those Highlanders who had supported the rebellion were confiscated, and to cut all the Highland chiefs down to size and reduce their traditional authority, their arms were seized and the wearing of kilts and tartans, a means of identifying the different clans, was banned (and not made legal again until 1782). 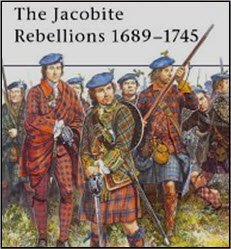 xxxxxFor all intents and purposes, Culloden had put an end to the Jacobite cause, in the military if not the political sense. Perhaps the lack of support for Charles Edward Stuart was not all that difficult to understand. There are those who argue that, had he continued on to London (and got there!), he may well have been successful in gaining the crown. That would seem unlikely. The attitude to monarchy had changed considerably since the reign of James II nearly sixty years earlier, the continual development of parliamentary democracy, though in its infancy, had seen to that. Furthermore, the Young Pretender was regarded as a pawn in the hands of the French, and this was certainly not in his favour. Roman Catholic France, quite apart from being Britain's chief commercial and imperial rival, smacked of absolute government and religious persecution. And south of the border, let's face it, the Scottish Highlanders - the bulk of Jacobite support - were seen as terrifying barbarians! And there was, too, the not inconsiderable economic factor. Scotland was allied peacefully with England, and England provided access to a large and growing free market. It was not the time to rock the boat. The Jacobite movement was destined to continue, but only in ballad, legend and romantic literature.

xxxxxIncidentally, the historical background to Tom Jones, the novel by the English novelist Henry Fielding, published in 1749, was based on the Forty-Five Rebellion, and Kidnapped, the adventure novel by the Scottish writer Robert Louis Stevenson, first published in 1886, was centred around real events in the aftermath of the uprising. ……

xxxxx……  The portrait of Flora Macdonald above is by the Scottish artist Allan Ramsay.

xxxxx…… Thexfamous song about the escape of Bonnie Prince Charlie and the hope for his return, Will ye no’ come back again, was written some years later by the Scottish songwriter Lady Carolina Nairne (1766-1845). Set to a traditional Scottish folk tune, it was one among a large number of Scottish aires that she wrote or modified during her life time. She also wrote With a Hundred Pipers and All and All, and The Auld House, a song about her birthplace in Gask. ……

xxxxx…… I myself visited the battlefield of Culloden in 1979 and was moved to write a poem! Should you care to read it please scroll down!

On that fateful day on Culloden Field,

Blade clashed with blade, or hacked upon shield,

There were shots and shouts 'mid a sea of red

Which swept o'er the fallen, the dying, the dead;

And hopes died too, above the glen,

The hopes of a King in the hearts of men,

And the Highlands paid a pitiful price

For the courage of their sacrifice.

I stood today on Culloden Field,

The noise of the battle now stifled, stilled,

No red upon the deep, lush green,

Yet a spirit disturbed that peaceful scene;

Did I not hear, on the edge of the breeze,

The sound of the pipes, faint 'mid the trees,

A ghostly wail with more intent

Than the long sad notes of a Scottish lament?

As I took my leave of Culloden Field,

Where we, as a nation, had died and killed,

Where a bold rebellion, halted crushed,

I heard again on the wind afloat

The distant cry of a piper's note,

And I pondered anew on those bygone wars

And the spirit born of a long-lost cause.