xxxxxThe Venetian Bartolomeo Cristofori, an accomplished harpsichord maker, invented the piano in 1709, though the term “harpsichord” was at first retained. This instrument, unlike the harpsichord, had the ability to vary the volume of the sound by varying the amount of pressure placed on the keys, achieved by using a hammer action in striking the strings. By 1726 he had produced an instrument which was very similar in mechanism to a modern piano. Three have survived. It came to be used in Germany and, with improvements, was the type of instrument played by such masters of the keyboard as Haydn and Mozart. 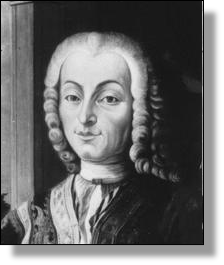 xxxxxBartolomeo Cristofori was born in Padua in the Republic of Venice, but very little is known about his early life. By the turn of the century, aged about 50, he was clearly an accomplished harpsichord maker. At that time he was working in Florence for Prince Ferdinando de Medici, and an existing three keyboard harpsichord, dated 1702 and bearing the arms of the Prince, was very probably made by his hand.

xxxxxIt would seem that it was in 1709 that he invented the piano, though the term "harpsichord" was at first retained. His new instrument was known as a "harpsichord that plays soft and loud" because, unlike the harpsichord, it had the ability to vary the volume of sound by varying the amount of pressure placed on the keys. This important innovation was achieved by replacing the plucking of the strings of a harpsichord with a hammer action that could strike the strings to a lesser or greater degree. By all accounts he had manufactured four such "pianos" within three years, and by 1726 had produced an instrument which, apart 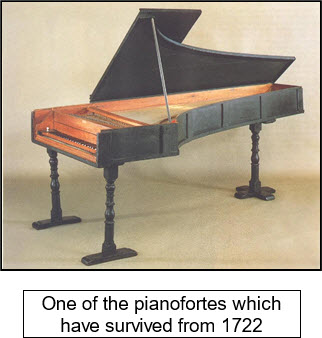 from having a less powerful tone, was very similar in mechanism to a modern piano. Three of his instruments have survived.

xxxxxAsxis often the case, for many years the new instrument was largely ignored in his own country, but became known and used elsewhere, notably in Germany. Here in the 1760s the piano builder Johann Stein (1728-1792) made improvements to the key mechanism and produced the type of pianoforte which was to be played by such masters of the keyboard as Haydn and Mozart. Otherxpiano builders who made modifications and improvement to this instrument were the Scotsman John Broadwood (1732-1812) in the 1780s, and the Frenchman Sébastien Érard (1752-1831) around 1810.

xxxxxIncidentally, in Italian, Cristofori's new keyboard instrument was known as a gravicembalo col piano e forte, and it is from here that we have derived our word "pianoforte" (literally soft-loud) - generally shortened to "piano". ……

xxxxx…… As we shall see, later in the century the Italian composer and virtuoso Muzio Clementi was to play a big part in developing the technique of piano playing, and in making improvements to the instrument itself.