xxxxxThe basic cause of the Crimean War was the continuing decline of Turkey and its Ottoman Empire, and the fear by Austria, Britain and France that Russia would use this as an opportunity to increase its power in the Black Sea and the Balkans. As we have seen, Catherine the Great had gained a foothold on the north coast of the Black Sea in 1774 (G3a), and taken over the Crimea nine years later. In the Balkans, the Treaty of Adrianople in 1829 had given the Russians some control over Moldavia and Walachia, and in 1833 the Treaty of Unkiar-Skelessi had virtually put the Ottoman Empire under Russian protection. This agreement had been replaced by a European guarantee, but in 1852 when a dispute arose as to which Christian Church should control the Holy places in Turkish-held Palestine, Tsar Nicholas used this squabble to dabble once again in Turkish affairs. He came out in support of the Orthodox Christians, and suggested that Russia should occupy Constantinople and take control of the Turkish Straits (giving access to the Mediterranean) on a “temporary” basis. Britain advised Turkey to reject that proposal and, as a result, Russia went on the offensive and took over Moldavia and Walachia. Turkey, confident of British and French support, declared war on Russia in October 1853, and two months later lost its fleet at the Battle of Sinope. As we shall see, in March 1854 the British and French did come to the support of the Turks, and that year saw the major Battles of Alma, Balaclava and Inkerman. 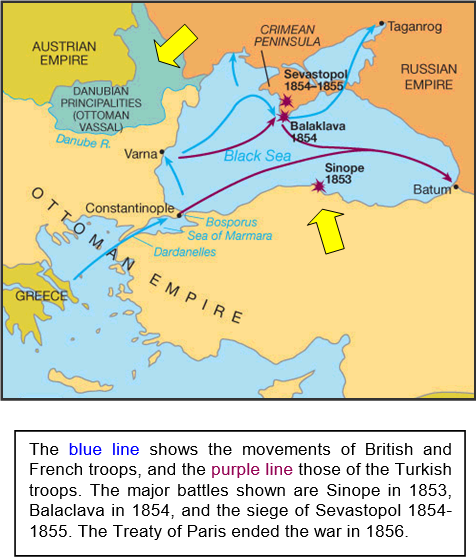 xxxxxThe root cause of the Crimean War was the continuing decline of the Muslim state of Turkey, the ineffective ruler of a vast but shrinking Ottoman Empire which, at one time, had stretched across large parts of Africa, Asia and Europe. As the “sick man of Europe” went into decline, and his subject lands began to totter, a number of European countries - notably the empires of Austria and Russia and the colonial powers of Britain and France - became anxious to gain from any imminent collapse and, more to the point, to stop any rival from doing likewise. The country most likely to benefit from the fall of the Ottoman Empire was undoubtedly Russia, and this sounded alarm bells in a number of European capitals. For many years, as we have seen, the Russians had been anxious to reach the Black Sea and gain access to the Mediterranean. Peter the Great had attempted but failed in this quest, but Catherine the Great had gained a foothold on the north coast of the Black Sea in 1774 (G3a), and had annexed the Crimean peninsula nine years later. 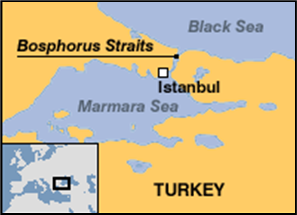 xxxxxThere had then followed a steady Russian advance into the Balkans. With the overthrow of Turkish authority in Greece, the Treaty of Adrianople of 1829 had given the Russians a commanding voice in the Turkish principalities of Moldavia and Walachia (in today’s Romania), as well as access to the Mediterranean via the Turkish (Bosphorus) Straits (illustrated left). Thenxfour years later came the Treaty of Unkiar-Skelessi, whereby Russia virtually became the sole protector of the ailing Ottoman Empire. Such a step, however, was opposed by countries in Europe and the Middle East in general, and regarded as totally unacceptable by three nations in particular. For its part, Austria was alarmed at the growing influence of Russia in the Balkans, whilst Britain and France feared that the Russians might well gain unilateral command over the Turkish straits and become a threat to their colonial and commercial interests in the Mediterranean. In 1841 these three states intervened and managed to replace the Unkiar-Skelessi agreement with a broader protectorate over the Muslim Empire, guaranteed by European states in unison, rather than by Russia acting alone.

xxxxxBut this diplomatic solution only served to postpone a conflict in the making. In 1852 Tsar Nicholas, believing that Western Europe would not wish to be openly embroiled in Balkan affairs, and, further, that he could depend on the friendship of his neighbour, Austria, latched on to a religious squabble in Turkish-held Palestine. The dispute, which centred around whether the Roman Catholic monks or the Orthodox Christians should control the Holy Places in Bethlehem and Jerusalem, gave him the opportunity to intervene once more in Turkish affairs. Having come out in favour of the Orthodox Christians, and demanded the safeguard of those then living in the Ottoman Empire, the Tsar suggested a partition of the Balkans and a short-term Russian occupation of Constantinople and the Turkish straits. When Turkey, on the advice of the British, rejected such a proposal, the Russians went on the offensive. In July 1853 they invaded the Danubian Principalities of Moldavia and Wallachia (shown by arrow on large map above) and refused a compromise settlement. As a consequence, the Turks, confident of British and French support (if not that of Austria), took up arms in the October. The Crimean War , the first major European conflict since the Napoleonic Wars, was under way. 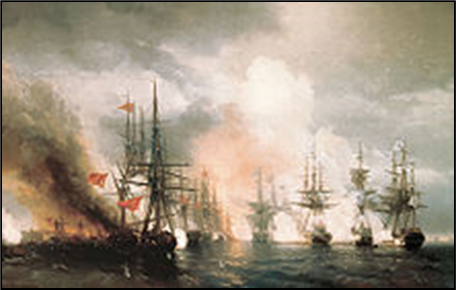 xxxxxIt was to be a conflict noted for its heavy casualties and military and logistic incompetence, in which the allied powers of Britain, France, Turkey and Sardinia eventually managed to defeat Russia and, for a time, check its ambitions in the Balkans and Black Sea areas. The first major engagement was the Battle of Sinope, which took place in November 1853. It was then that the Russian navy made a surprise attack upon Sinope, the Turkish seaport on the south coast of the Black Sea (arrowed on large map above). Much of the city and harbour installations were badly damaged, and the Ottoman fleet was completely destroyed (illustrated). Turkish casualties were put at 4,000, and it was reported that many were shot by Russian sailors as they floundered in the water.

xxxxxThis battle, noted for its effective use of the shell gun in naval warfare, was regarded as a massacre in Britain and France, and led to an enormous public outcry and a demand for war. For its part, the British government had no brief for Turkey, but saw the need to keep the power of Russia in check. Britain and France sent fleets to the Black Sea, and, as we shall see, both countries declared their support for Turkey in March 1854, a year that was to witness the Battles of the River Alma, Balaclava and Inkerman.

The Battle of Sinope