xxxxxThe French painter Gustave Courbet was a major exponent of Realism. He maintained that the task of the artist was to depict “real and existing things”. His Burial at Ornans, for example, produced in 1850 on a huge scale, was just a drab picture of a mundane peasant funeral. Following the rejection of another vast canvas, The Painter’s Studio, Courbet staged his own “Pavilion of Realism” at the Paris World Fair of 1855. This gained him notoriety and an impressive following. His rendering of everyday events included The Stonebreakers and The Winnowers, and he also produced paintings of his native Jura Mountains and the Normandy coast. His nude studies included The Bathers - which provoked a scandal by the ugliness of its female figure - and his erotic The Sleepers, a picture of lesbian lovers. Courbet, known for his republican sympathies, spent his last years in Switzerland after being accused of masterminding the destruction of the Vendôme column in Paris during the riots of the Commune in 1871. His realistic works, like those of the Barbizon School, rejected conventional academic themes and greatly influenced the Impressionists. 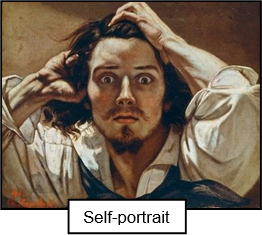 xxxxxThe French painter Gustave Courbet was the leader of the Realist movement. He maintained that the task of the artist was to “record the manners, ideas and aspects” of the age in which he lived. For him, painting was essentially a “concrete art” which could only depict “real and existing things”. As a result, many of his works portrayed contemporary peasant life with uncompromising frankness, and some of his portraits and nude figures were purposefully given unattractive features in order to emphasize this acceptance of the “un-ideal” (non ideal) that reality reveals.

xxxxxCourbet was born in Ornans, a small town in the mountainous Jura region of eastern France, close to the Swiss border. As a child he fell in love with the outstanding beauty of this area, and scenes from the local countryside later featured in many of his landscapes. After starting art lessons at the age of 14, in 1837 he moved to the nearby town of Besancon to study law (as his parents believed), but instead attended the local art academy for two years before making his way to Paris. Full of self-confidence and not without 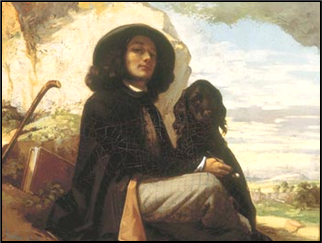 a touch of arrogance, he furthered his artistic skills by copying paintings in the Louvre - notably those of Velazquez and Rembrandt -, but his career made little headway. He managed to have three paintings accepted for the Paris Salon, including Self Portrait with a Black Dog in 1844 (illustrated), but many of his works were rejected, and he sold little of value over a period of ten years. Throughout this time he was supported by his father, a man of peasant stock who had become a prosperous farmer and was anxious that his son should also succeed in his chosen career.

xxxxxIn fact, a change in fortune came about in 1848, the year of revolution. Courbet - very much a rebel at heart - supported the uprising against Louis Philippe, but took little active part in the fighting. In the turmoil caused by the setting up of the Second Republic, however, the Salon’s selection committee was stood down and Courbet managed to have ten works put on display. These were enthusiastically received by critics and public alike, and the following year he won a gold medal with his entry After Dinner at Ornans. But official recognition was short-lived. The same year he returned home and embarked on his Burial at Ornans, one of his first realist paintings (illustrated below). Though recording just a mundane event in a remote town in eastern France, its enormous canvass contained close on fifty life-size figures, including Courbet’s family and friends, local dignitaries and a large group of mourners, men and women. There was nothing remotely idealistic or heroic about this gathering of country folk; it was as drab and stolid as such an event was likely to be, but in the eyes of its creator it deserved a scale on a par with the recording of some distant battlefield. This was depicting a “real and existing” event in the contemporary world. 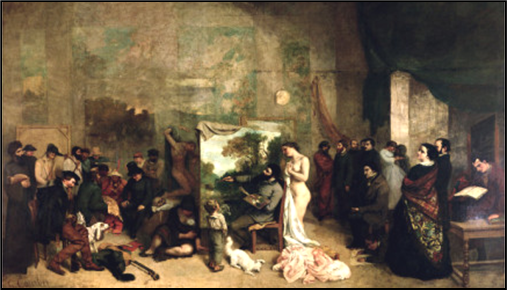 xxxxxHowever, when exhibited at the Paris Salon of 1850 it was viewed with some alarm. It was seen by many as “vulgar” - being ordinary and commonplace, - whilst those in authority were uneasy about the undue prominence given to a peasant community. And his next major work, The Painter’s Studio of 1855, a huge complex allegory depicting seven years of his “artistic and moral life”, likewise failed to please. With Courbet centre stage at his easel, the characters on his right depicted his friends and art lovers, whilst those on his left were described as those who “live on death” (and included a disguised portrait of the Emperor himself!). This obscure work was rejected by the selection committee, and it was then that Courbet produced his own manifesto on the role of art, and mounted his one-man “Pavilion of Realism” with The Painter’s Studio (here illustrated)  as the centre piece.

xxxxxThis public protest brought him both fame and notoriety, and encouraged him to spread his gospel further afield. Over the next fifteen years he traveled widely, and was well received wherever he went. He met the American artist James Whistler and the young Claude Monet during his travels in France, and he exhibited his works in Germany, Holland, Belgium and England. Such was the standing that he achieved, that in 1870 the French government offered him the Legion of Honour. Courbet declined the decoration, seeing it as state interference in the world of art, and the following year, with the coming of the Paris Commune, he was again at odds with the authorities. Once the insurrection had been put down, he was accused of conspiracy in the destruction of the Vendôme Column in Paris, a monument to Napoleon Bonaparte’s victories. It would seem that he was not in fact involved in this event, but, given his republican sympathies, he was made the scapegoat. He was imprisoned for six months and given such a heavy fine that, once released from prison, he escaped and spent the rest of his life in Switzerland. He hoped for a reprieve but it never came. 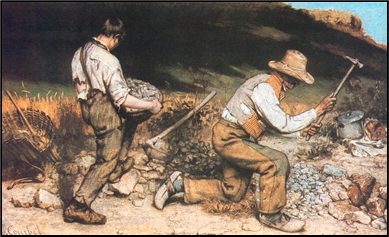 xxxxxOutstanding among his realistic peasant settings were his Stone Breakers of 1849, a powerful work depicting menial labour (destroyed in the Second World War), The Sleeping Spinner of 1853, and The Winnowers of 1855, showing peasant women at work. Many of his landscapes were inspired by the rugged terrain of his native Franche-Comte, but he also did some superb marine paintings of the Normandy coast, such as his dramatic Cliffs at Etretat after the Storm, painted in 1869. And the female form did not escape his attention though, in deference to realism, the figures were sometimes fat and ugly, as in The Bathers of 1853. That he was capable of sensuous paintings of the female body was to be seen in his picture of lesbian lovers, produced in 1866 and entitled The Sleepers (illustrated below).This erotic rendering is well known today, but it was painted for a wealthy Turkish client and was not seen in public at that time. And the same goes for the highly erotic painting The Origin of the World, also produced in 1866. The attractive model for these two works was Joanna Hiffernan, the mistress, at this time, of the American painter James Whistler, then living in London. This fact doubtless contributed to the breakdown of the close friendship between these two men, begun in 1855. 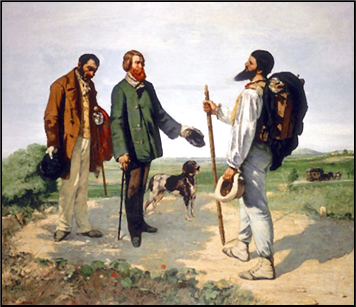 xxxxxAmong his best still-lives, many produced whilst in prison in 1871, was his Apples and Pomegranates (illustrated below), given solid form by means of skilful lighting. And worthy of special mention is Courbet’s The Meeting (illustrated here). This work, which captures the moment in May 1854 when, arriving at Monpellier, he is greeted by his wealthy and generous patron Alfred Bruyas, caused a sensation when exhibited in 1855. Owing nothing to history, religion or mythology, it championed the cause of what might be called incidental and non-intellectual art. And by the Bohemian artist’s demeanour - confident and with head held high - it also struck a blow for the painter’s social standing. He greets his patron as an equal (if not superior!). Not surprisingly, Courbet’s rejection of both Classicism and Romanticism in the cause of Realism (like the works of the Barbizon School), had a marked influence on the Impressionists. Like him, they were to reject conventional academic themes in favour of subjects from the contemporary world.

xxxxxIncidentally, Courbet’s outgoing personality, and his strict interpretation of the artist’s role in society, won him a num 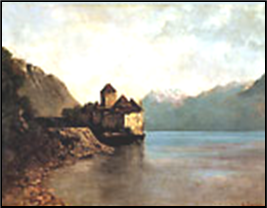 ber of intellectual friends, including the poet Charles Baudelaire and the political theorist Pierre Proudhon. The Brasserie Andler, the café where they to used to meet in the late 1840s to discuss art and literature, came to be known as “The Temple of Realism”. ……

xxxxx……  During the last four years of his life, spent in Switzerland, Courbet made a living painting portraits and landscapes. Among the latter were numerous versions of the Château de Chillon, situated on Lake Geneva, near Montreux.