xxxxxAs we have seen, in 1119 a compromise was reached between Henry V of Germany and the Pope on the vexed question of the investiture controversy. This was officially confirmed at the Council of Worms in 1122. By a "Concordat" Henry gave up any right to invest bishops, but gained the right to be present at their election and to receive homage from them. In the meantime, in England Henry I and Anselm had patched up their quarrel but, as we shall see, the controversy was to return with a vengeance in 1164 during the reign of Henry II.

xxxxxAs we have seen, the investiture controversy - the row between Church and State over the part each should play in the appointment and installation of new Bishops and Abbots - had come to a head in 1075 during the reign of William the Conqueror. It was a bitter struggle that lasted nearly fifty years, and, to begin with, it was mainly a disagreement between the papacy and the Holy Roman Empire, as Germany was then called. It began with a struggle between Pope Gregory VII and Henry IV and continued with equal ferocity between pope Paschal II and Henry V. But the controversy did spill over into other countries - particularly England - where Anselm, the Archbishop of Canterbury, had a running battle with both William II and Henry I. 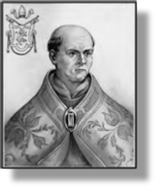 xxxxxAs far as the Holy Roman Empire was concerned, the matter was finally resolved by a compromise agreed between Henry V (illustrated left) and Pope Callixtus II (illustrated right) in 1119. Both parties were anxious for a settlement, but especially the Emperor, who faced widespread unrest at home. The final agreement was issued at the Diet or Council of Worms in 1122 and was called a Concordat, the first true example of a formal agreement between the Roman Catholic Church and a sovereign state. By it, Henry gave up his right to invest bishops with the symbols of office - the ring and staff - and agreed that appointment should be by free election. In return the king had the right to be present at the election of bishops, to receive homage from the 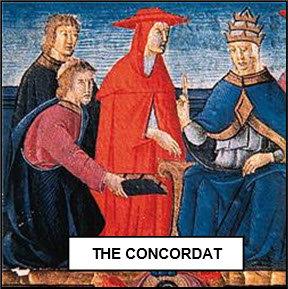 m as feudal subjects, and to be able to intervene in long-term disputes.

xxxxxThe agreement had the merit of saving the faces of both parties but, in practice, it did increase the influence of the Roman Catholic Church, making a distinction as it did between the authority of the State (temporal power) and that of the Pope (spiritual power). And the same comment could be made of the compromise reached in England between Henry I and Archbishop Anselm. Here, however, the controversy was not over and, as we shall see, was to resurface with far-reaching consequences in 1164 during the reign of Henry's grandfather, Henry II.