xxxxxA significant engagement of the Peninsular War was the Battle of Corunna, in which the British commander General Sir John Moore was killed. Fought in January 1809, it followed a hazardous 250 mile retreat from Salamanca in central Spain. After repulsing a series of attacks en route, the British army eventually held the French back at the port of Corunna on the north-west coast, and then managed to escape by sea. A poignant reminder of this battle was provided eight years later with the publication of the elegiac poem The Burial of Sir John Moore, written by the Irish poet Charles Wolfe. 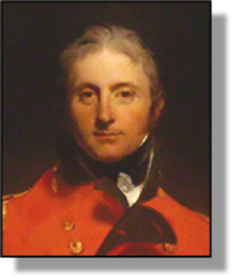 xxxxxOne of the significant engagements of the Peninsular War was the Battle of La Corunna, fought in January 1809 when the commander in chief was General Sir John Moore (illustrated) - Wellesley having been recalled to London. Appointed in the September, he was given the task of assisting the Spanish in their fight against Napoleon, then conducting the French campaign in person. Leaving Lisbon, he advanced into Spain but, having reached Salamanca he learnt that Napoleon had already defeated the Spanish, had occupied Burgos, and was about to enter Madrid. Though heavily outnumbered by Napoleon’s army, he decided to march north-east to engage a French corps at Valladolid. This gave Napoleon time to cut off the British line of retreat to the south and then go in pursuit. Moore, seriously threatened, was then forced to dash for the port of Corunna in north-west Spain in order to make his escape by sea. The journey, some 250 miles long, took seventeen days and was achieved under conditions of great hardship. It was mid-winter, and the open countryside was either covered in snow or thick mud. Over such terrain, fuel and food was scarce, and, to speed up the retreat, stores had to be destroyed to lighten the load (see illustration below). 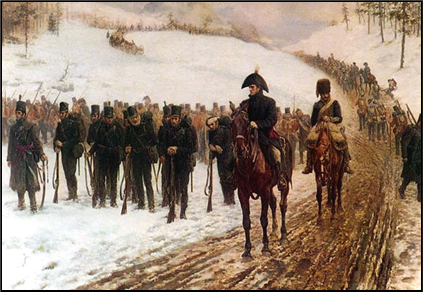 xxxxxHaving beaten off the French in a series of rearguard actions - notably at Benevente and Lugo - the British force finally limped into Corunna in January 1809, only to discover that the naval transports had not yet arrived. By then the French, commanded by Marshal Soult, were approaching the port, and Moore had no alternative but to turn and fight the enemy, assembling his troops south of Corunna between the village of Elvina and the sea. A few days later the French mounted a number of attacks, twice gaining control of Elvina, but being driven out on both occasions. Eventually the British pushed forward and the French fell back in confusion. It was during this final assault that the British commander, Sir John Moore, was mortally wounded. By this time, however, the transports had arrived, and the new man in charge, Sir John Hope, withdrew his men into the town. General Moore was buried on the city ramparts that night, and the next day a weary and depleted army crowded onto the transports and made its escape.

xxxxx“The Retreat to Corunna”, as it came to be called, was seen by some as a military disaster, and there was much criticism of Moore’s tactics. Overall losses amounted to 4,000 and the British army had come close to total defeat. On the other hand, many argued, including Wellesley, that the action as a whole had delayed the French conquest of Spain at the very time when the Spanish themselves were unable to offer any worthwhile resistance. Whatever the verdict of history concerning this campaign, the army arrived home in a pitiful condition, and had to be reformed and re-equipped. However, within a few months it was back in Portugal, once more under Wellesley’s command. This time it was to stay until the French had been driven out of the peninsula.

xxxxxAxpoignant reminder of the battle itself was provided in 1817 when the Irish poet Charles Wolfe (1791-1823) produced his famous elegiac poem The Burial of Sir John Moore after Corunna. The first two verses and the last are given below: 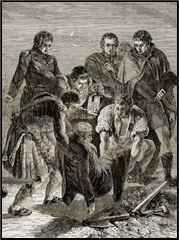 Not a drum was heard, not a funeral note,

As his corse to the rampart we hurried;

Not a soldier discharged his farewell shot

O’er the grave where our hero we buried.

We buried him darkly at dead of night,

The sods with our bayonets turning,

By the struggling moonbeam’s misty light

And the lanthorn dimly burning.

Slowly and sadly we laid him down;

From the field of his fame fresh and gory;

We carved not a line, and we raised not a stone,

But we left him alone with his glory.

xxxxxIncidentally, today the granite tomb of Sir John Moore is situated in the Jardin de San Carlos overlooking the harbour from where the remnants of his army made their escape. ……

xxxxx…… Playing an important part in the retreat to Corunna, and the subsequent defence of the port, were the cavalry units commanded by General Lord Paget (the Marquis of Anglesey) (1768-1854). They acted as the rear-guard during the long march north and then, following Moore’s death, they repulsed a French attack as night fell, thereby allowing what was left of the British force to embark on the waiting transports. Paget later gained fame for leading a charge of 2,000 heavy cavalry against the French 1st Corps during the Battle of Waterloo. He lost a leg during the encounter and the amputated limb, buried and with its own tombstone, became a tourist attraction in the village of Waterloo!