xxxxxThe American novelist James Fenimore Cooper is best known for his “Leatherstocking Tales”, five books about the settling of the American frontier before and after the American War of Independence. These included the popular The Last of the Mohicans of 1826, set, like the others, amid the wooded border lands which were yet to be tamed. These adventurers, based on the historical Waverley novels by Sir Walter Scott, caught the public’s imagination, revolving as they did around the life of the colourful frontiersman Natty Bumppo (alias Leatherstocking and Hawkeye), and his struggle to preserve his old way of life. And Cooper also gained fame for his series of sea tales, beginning with The Pilot in 1823. These made the sea itself the central focus of interest, setting the tone for the works of Herman Melville and Joseph Conrad. He travelled in Europe for seven years, writing about political matters there and in the United States, but he spent the last 17 years of his life at Cooperstown in New York State. He was one of the first American novelists to gain international recognition. 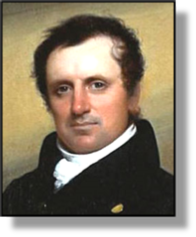 xxxxxThe American novelist and social critic James Fenimore Cooper wrote about 30 novels, and became one of the first American writers to gain international recognition. Today he is remembered above all for his “Leatherstocking Tales”, five books about the settling of the American frontier before and after the American War of Independence. However, in addition to these adventures in the wilderness, he also made a name for himself with his sea novels, beginning with The Pilot in 1823.

xxxxxCooper was born at Burlington, New Jersey, and spent his boyhood on his family’s primitive frontier settlement of Cooperstown in New York State. Here it was that he gained first hand knowledge of the ways of the forest and the life of the Indians who still lived in this wild terrain. He was educated in a small, private school in Albany, and then went to Yale, but was expelled in his third year for skylarking about. Doubtless as an outlet for his high spirits, his father agreed to his going to sea. He first served as a common sailor in the merchant marine, and then became a midshipman in the US. Navy. This period at sea proved a valuable experience when he started writing novels in earnest. He left the navy in 1811, following the death of his father, and it was in that year that he married Susan De Lancey, a young woman from an influential New York family. This enabled him to live the life of a gentleman, and he did so for the next ten years, mixing in high society whilst managing his wife’s estates in Westchester County, New York.

xxxxxIt was in 1820, at the age of 30, that, in response to a challenge from his wife, he turned his hand to writing. His first work, Precaution, an attempt to produce a novel in the style of Jane Austen, was little short of a failure. He was hardly competent to write with authority on the manners of English gentry and it showed. The following year, however, his novel The Spy, a patriotic tale of the American Revolution, was a completely different matter. Based on the historical adventure stories of the Scottish writer Walter Scott - a genre he could more easily handle - it brought him immediate success, and launched him on a promising career. He moved to New York in 1822 and there, as a leading light in the city’s circle of intellectuals, he began to produce his “Leatherstocking Tales”, five stories of adventure and historical romance which followed again the pattern of Scott’s Waverley novels. Set amid a wild, wooded frontier territory that had yet to be tamed, they caught the public’s imagination. 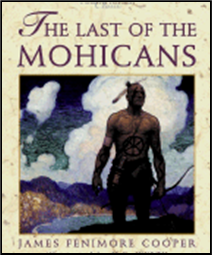 xxxxxThe first one, The Pioneers, was published in 1823, and this was soon followed by The Last of the Mohicans in 1826 and The Prairie in 1827. Then later, in the early 1840s, came The Pathfinder and The Deerslayer. All followed - though by no means in chronological order - the exploits of a rugged frontiersman and scout named Natty Bumppo, and known also as Leatherstocking and Hawkeye. It was, above all, the story of this colourful character, and his determined struggle to preserve his native forestland and its passing way of life, that contributed so much to the success of the series. Today, the best known of these wilderness tales is The Last of the Mohicans, set, like The Pathfinder, during the Seven Years War. Full of action and 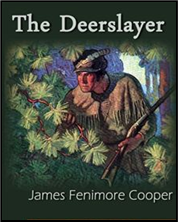 incident, it was a romanticised account of the decline of the River Indians of the upper Hudson Valley. In fact, however, The Pioneers provided the best picture of American frontier life, and the determination of a stubborn, resourceful people to make a living in a hostile environment. Nor was this work - or his others in the series - simply adventure stories played out within a wooded terrain. Like Scott’s novels, there was also an underlying conflict of interests, be they social or moral. In Cooper’s case they centred mainly around the changes being wrought upon the countryside and its inhabitants by the spirited march of a new nation, advancing in the name of progress.

xxxxxNor must the contribution made by Cooper to the sea novel be forgotten. Best known among his works are The Pilot (1823), The Red Rover (1828), The Water-Witch (1831) and The Sea Lions (1849). These tales of the sea, like his Leatherstocking Tales on land, were more than adventure stories simply played out afloat. For the first time the sea itself was awarded the dominant role, and man, despite his skill and courage, became the victim and not necessarily the victor, a turnabout which was later developed by the American writers Herman Melville and Joseph Conrad. 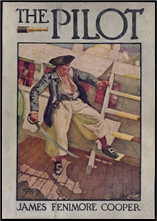 xxxxxIn 1826 Cooper began a lengthy stay in Europe, visiting England, France, Switzerland and Italy, and developing a close friendship with the Marquis de Lafayette, the French veteran of the American War of Independence. It was during this time that he wrote his trilogy, including The Bravo of 1831, in which he denounced the reactionary regimes on the continent. By way of contrast his Notions of the Americans, written in 1828, was full of praise for American democracy. By the early 1830s, however, he had become much more critical of the American political scene, and his references to mob-politics made him a target for the Whig press when he returned to America in 1833. This and other events involved him in a number of lawsuits and, although his works remained popular, his family commitments obliged him to write regularly in order to make a living.

xxxxxHe stayed for about a year in New York, and then finally settled in Cooperstown. Apart from continuing his political and social criticism, this period saw the production of his last two Leatherstocking novels, and his trilogy of the 1840s known as the “Littlepage Manuscripts” - Satanstoe, Chainbearer and The Redskins. These supported the landed classes against the nouveau riche by tracing the story of a New York State family over a period of several generations. And also belonging to this period were his two major works of non-fiction, his Gleanings in Europe, a description of his travels abroad, completed in 1838, and his History of the U.S. Navy, a well-researched treatise, produced the following year. 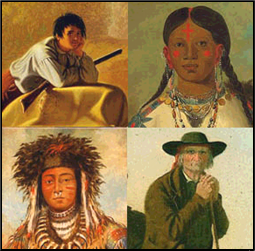 xxxxxAn author of international repute, Cooper’s novels were widely translated. It must be said that they were open to criticism on a number of counts. Some of his characters could have been better drawn, his dialogue was somewhat stilted, and he gave a somewhat idealised picture of the homely forest folk, and the stalwart man of the sea. Furthermore, as Mark Twain pointed out, his knowledge of woodcraft was questionable. However, his adventures had plenty of action, the settings were romantic and challenging, and the underlying theme posed a current conflict of interests with which the reader could readily identify. And in his wilderness tales he caught as no writer before him (and perhaps since) the spirit and the tenacity of a people standing and struggling on the frontiers of nationhood. Meanwhile, in his stories afloat, as we have 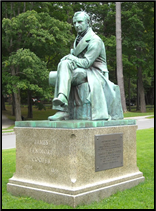 seen, he opened up a new dimension in the annals of the sea.

xxxxxIncidentally, Cooper died at Cooperstown and was buried in Christ Church cemetery there. A monument to his work and memory stands on the site of Otsego Hall, the Cooper family home. ……

xxxxx…… High spirited in his youth, we are told that he was sent down from Yale because, among other pranks, he was responsible for an explosion in one of the college rooms, and he trained a donkey to sit in a professor’s chair!