xxxxxThe Council of Constance was called in 1414 to make yet another attempt to solve the Great Schism which had divided the Church since 1378 (R2). By 1409 there were three popes in existence, at Rome, Avignon and Pisa. Under the guidance of Sigismund, king of Germany, it issued the Sacrosancta, giving the council supreme authority. The popes at Avignon and Pisa were then deposed and the one at Rome ordered to abdicate. This achieved, in 1417 Martin V was elected as the only rightful pope and the “schism” was brought to an end. But the damage done to papal authority was far from over. From now on there were to be regular council meetings to regulate the Church - the conciliar movement - and, as Sigismund’s involvement had clearly shown, the influence of secular power in the affairs of the church had been significantly increased. As noted earlier, it was the Council of Constance which condemned Jan Huss, the Bohemian Reformer, as a heretic and had him burnt at the stake in 1415.

xxxxxAs we have seen, on the return of the pope to Rome in 1377 following the “Babylonian Captivity” in southern France, the papacy became tragically split - the so-called Great Schism of 1378 (R2). One pope was appointed in Rome, whilst another was elected at Avignon. Both claimed to be the rightful Vicar of Christ and both excommunicated the other! The matter was made worse in 1409 when, at the Council of Pisa, called to settle the matter, the election of Alexander V was not recognised by the existing two popes! Now there were three popes! 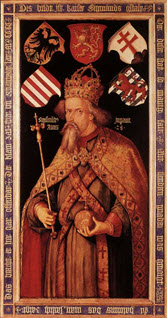 xxxxxIt was against this background that the Council of Constance met in 1414, mainly due to the insistence of Sigismund I, King of Germany. After introducing a new system of voting, it then issued the decree Sacrosancta. This stated that the authority of a general council of the Church was superior to that of the pope, and that, in the future, councils were to be held frequently in order to ensure the proper government of the Roman Catholic Church. The pope at Pisa, now the antipope John XXIII, having fled from Constance in the hope of breaking up the meeting, was then deposed, together with the pope at Avignon, Benedict XIII, whilst the pope at Rome, Gregory XII, was ordered to abdicate, which he did under protest. This achieved, in 1417 the Council elected Martin V as the one and only rightful Pope. The Great Schism which had begun in 1378 was over. (This portrait of Sigismund is by the German artist Albrecht Durer.)

xxxxxBut the damage done by the Great Schism was certainly not over. Quite apart from the loss of authority and prestige suffered by the papacy during this unholy split - and, as we have seen, this was considerable - the papacy that emerged from the Council of Constance was shorn of some of its power. There were now to be frequent council meetings to regulate and define the powers of the catholic church - known as the conciliar movement - and it was clear, if only by the part played by Sigismund at Constance, that the influence of secular powers in the affairs of the church had been significantly increased. No longer could the pope assume that he was the chosen arbitrator in ecclesiastical matters, let alone in affairs of the state. The Babylonian Captivity and the Great Schism that directly followed it had clearly undermined the authority of the papacy, and put in jeopardy its claim to undisputed leadership of the Christian faith.

xxxxxBut the Council of Constance was not wholly concerned with ending the Great Schism. Among other matters, it condemned the teaching of the English priest John Wycliffe, founder of the Lollards, and, as we have seen, denounced the Bohemian religious reformer Jan Hus as an obstinate heretic. He was handed over to the secular authorities and burnt at the stake in 1415. 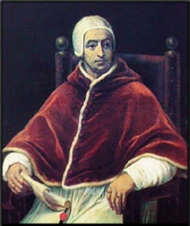 xxxxxIncidentally, Benedict XIII (illustrated), the former pope at Avignon, refused to accept the Council’s ruling. From his castle at Peniscola he maintained for the rest of his days that he was the rightful pope. Referred to as the Pretender Pope, he was creating new cardinals as late as November 1422. Then, on his death, one of his cardinals, Jean Carrier, elected a Bernard Garnier as Benedict XIV! He ended his reign in 1430. As no one except Carrier knew where he lived, he became known as the “hidden pope”. In the meantime, King Alfonso V of Aragon had his own pope elected as Clement VIII, and he reigned until his abdication in 1429!